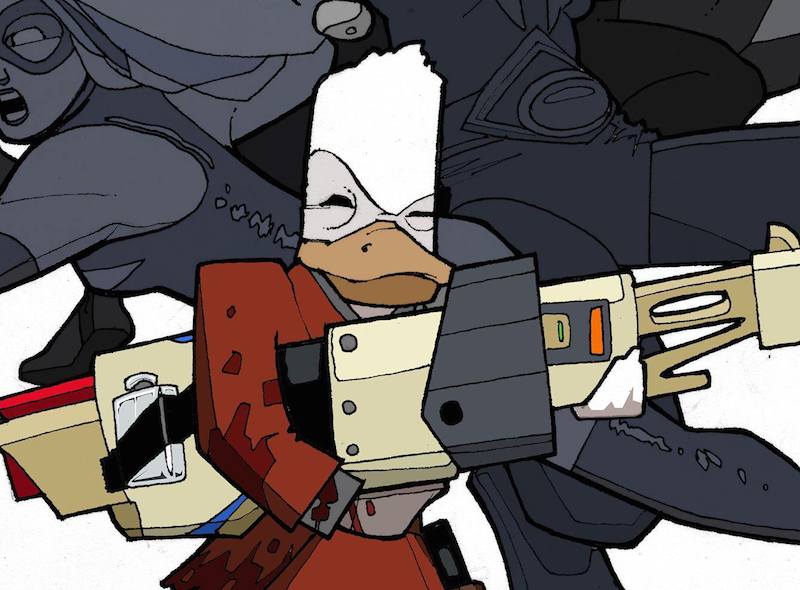 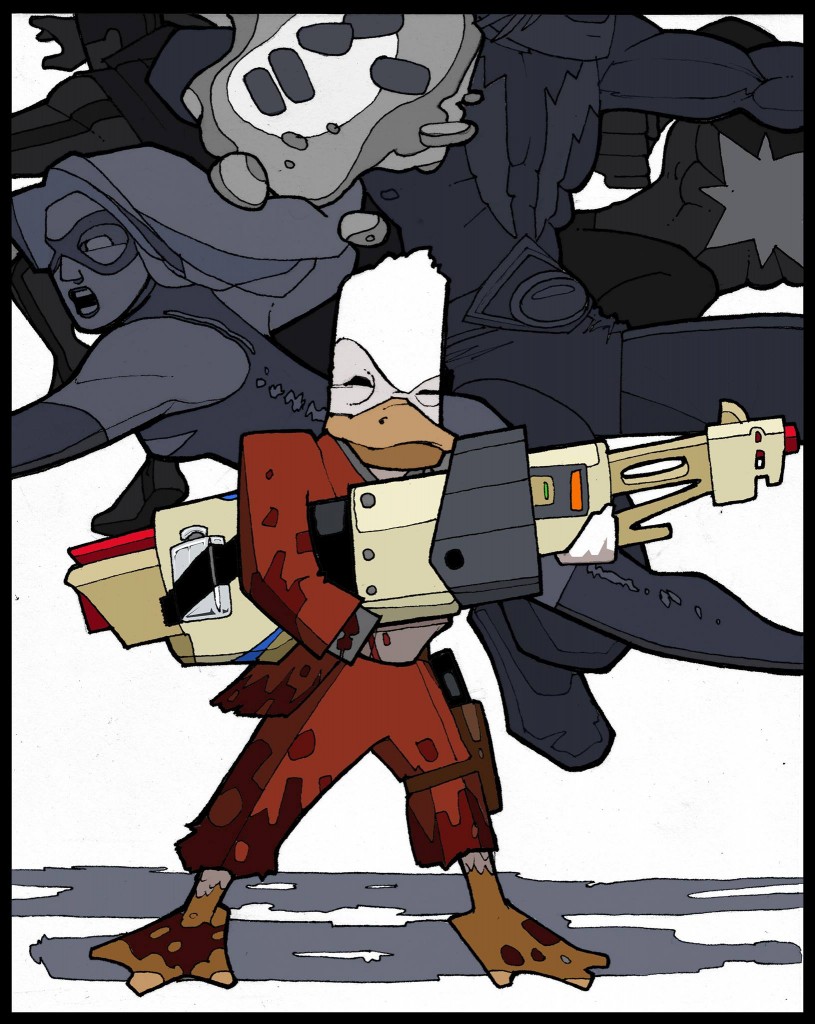 Way back in 2015, Marvel announced that they were making a new HOWARD THE DUCK film and the internet practically burst into flames. #HowardtheWTF. The internet erupted in a nerd war, unseen since the days of Ben Affleck’s casting as Batman. (I still can’t believe BATMAN v SUPERMAN’s box office numbers.) Like water off of a duck’s back (sorry), Marvel ignored the internet outrage and moved forward with their most controversial movie to date.  I remained, skeptical. Like everyone else, I assumed the after-credits scene of GUARDIANS OF THE GALAXY was simply a homage to Marvel’s first theatrical release. Never for a second did I believe that Marvel would ever actually attempt to make a new film starring one of their most controversial and embarrassing characters. Marvel’s consistent track record aside, I couldn’t really imagine any new film adaptation of  Howard the Duck being any better than the 1986 clusterduck. It was the addition of Gareth Evans (RAID: REDEMPTION) as the director that really caught my attention. Then, it was the announcement that Michael Fassbender (X-MEN:  DAYS OF FUTURES PAST, PROMETHEUS) was going to voice Howard, that really made me reconsider my skepticism. Still, a HOWARD THE DUCK movie? Everything changed for me at the 2015 San Diego Comic Con. Evans went on stage and completely rocked the walls of Hall H. I left that show, not only a converted Howard the Duck fan, but utterly convinced that Marvel could turn a pile of dead kittens into a successful summer blockbuster.

HOWARD THE DUCK takes place many months after Howard’s release from The Collector’s imprisonment in GUARDIANS OF THE GALAXY.  The movie starts with Howard hitching a ride back to his home world, Duckworld, on board some dilapidated scavenger ship. Having started his journey home with no real currency to speak of, Howard was forced to perform a series of random odd jobs across the universe to help pay for his way back home. It’s hinted that Howard has had to perform a lot of ‘questionable jobs’ in order to secure his way home.  ‘These feathers have seen their fair share of horrors.’ Also, am I the only one who got the impression that he was implying that he was also a gigolo for a short period of time? Despite all of that, Howard has still managed to hold on to his sarcasm and enjoyment of the ‘finer things in life.’   After what is implied to be a  long journey, Howard finally arrives on Duckworld and immediately seeks out his love, Beverly. He’s not back on his planet for more than a couple of minutes before a portal magically appears next to him and sucks him inside. At this point, the movie turns into a non-stop, superhero heavy, alien combat, futuristic war movie, that never ceases until the very end.  Ripping heavily from Marvel’s ‘Secret Wars,’ Howard finds himself on some sort of ‘Battleworld’ that consist of many different types of lifeforms battling against one another. Arriving in the middle of a massive battlefield, full of super-beings trading powerful blows in the sky while a vast array of alien life forms trade laser blast on the ground, Howard immediately finds himself in danger.  Moments from a brutal death by the hands of two Skrull warriors, Howard is rescued by Adam Warlock (played by Alex Pettyfer), who recognizes Howard from their shared confinement by The Collector. Warlock explains to Howard that an Inhuman outcast named ‘The Beyonder’ (played by Simon Baker) has gained possession of the Reality Infinity Stone and is using it to protect himself from capture by surrounding himself in an ‘never ending war.’ By the request of the Inhuman king, Blackbolt, (Jim Caviezel reprising his role from the after credits scene from AVENGERS 2 and set to star in the upcoming INHUMAN movie ) and his queen, Medusa (Played by Laverne Cox of ORANGE IS THE NEW BLACK fame) Warlock has been given the task of defeating The Beyonder and returning the Infinity Stone back to the Inhumans.  We learned that Howard was pulled to the Battleworld because of his interaction with the Power Stone in GOTG.  The same event that freed Warlock from his cocoon.  Warlock promises to keep Howard alive, but that he must accompany him on his mission.  They eventually run into Ms Marvel (Katee Sackhoff) and Captain Mar-Vell (Jesse Williams) ‘no relation’ who were also handed the responsibility of taking out The Beyonder. The rest of the movie consist of the group battling their way across an alien war zone full of recognizable Marvel alien forms and superpowered beings, towards the Beyond’s castle, and it’s nothing short of amazing!

I guess the biggest criticism I’ve heard about this movie is ‘why call it a HOWARD THE DUCK movie?’ Howard’s role of the fumbling ‘duck out of water’ could have easily been filled by any number of Marvel Characters. Also, with the plot so closely resembling the Secret Wars story line, Marvel could have easily just called it that and still used it as platform for introducing their next generation of ‘space heroes.’ With the recent box office victory of two other of their CGI leads, Rocket and Groot, it would only make sense that Marvel would try and reattempt their previous success with another CGI anthropomorphic lead character. Howard is a gun-toting ‘Rocket knock off,’ that’s slightly more bumbling and nerdy. Regardless, Marvel chose Howard to be the audience’s representative in this space themed war movie and it works! Plus, don’t count Howard out. He has some of the cooler action moments in the movie. ‘I’m just a small duck, with a large gun.’ And it’s funny! After seeing the movie, it makes complete sense that Marvel would tap Evans to direct this film.  There are so many moments, with our galactic heroes fighting their way through an unending sea of hostile creatures, that directly mirror scenes from the RAID movies. Heroes trapped on an alien planet, surrounded by creatures that want to kill them, trying to fight their way through it. I know the Brood are basically alien cockroaches, but, the scene with Ms Marvel taking on an entire chamber full of them was one of the most beautifully brutal things I have ever seen. The action in HOWARD THE DUCK is non-stop and incredibly entertaining.  Fassbender actually finds a way to make a duck sound sexy. Seriously, every time Howard spoke, I found myself floating over my seat.  Which, is extremely problematic for me. I also want to point out that Marvel took a lot of ‘controversial’ risk with the casting of this film and I’m happy to see their choices were as well received as they were!  I definitely recommend this movie to everyone who promised to boycott this film or preemptively declared this ‘Marvel’s first bomb.’  Not only will this be one of your favorite Marvel movies, but, it will also be one of your favorite action movies. Seriously!  It’s an intergalactic war movie with a small group of bad ass alien super heroes battling their way across an alien war zone! It’s a movie with a duck running around with a giant machine gun! You’d be quackers not to see this film! Plus, stick around for the after credits scene.  2 words.  Planet. Hulk.