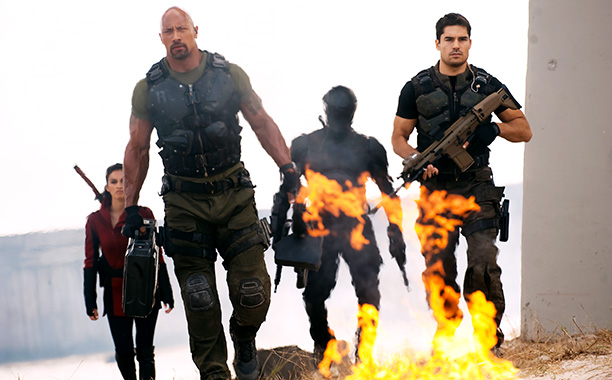 Do yourself a huge favor and don’t take G.I. JOE: RETALIATION seriously. If you do, I guarantee you will be let down and find yourself chuckling to yourself in your theatre seat for 2 hours while cramming a crap ton of popcorn down your throat hole. This movie is based on a toy line, has spawned a number of great cartoons, comic books, and films, and is meant to be nothing more than some good old fashion American fun. Approach it as such, and you may be surprised by how much you are actually enjoying yourself.

Now let’s be clear about something right off the bat; yes, I did enjoy  2009’s G.I. JOE: THE RISE OF COBRA but will say that it’s a guilty pleasure of mine and can be filed under “craptastic” on my DVD/Blu-Ray shelf. I know it’s bad, full of some shoddy CGI, a handful of bad actors/characters, and is generally not the best adaptation fans could have asked for. That said, G.I. JOE: RETALIATION aims to fix all of those problems with a seemingly huge focus on fan service. I can safely say that this new installment is geared toward people who love the G.I. Joe brand and didn’t really like the first movie. RETALIATION definitely feels like a more natural G.I. Joe film that grounds itself in reality a bit more while still preserving the balls-to-the-wall action fans of the series expect.

When it was announced that director Jon Chu was taking over directorial duties I became very skeptical. His only film credits were a couple of STEP IT UP films and a Justin Bieber documentary. Not exactly my first choice. However, after seeing the film, it is most evident that Chu is a fan of the franchise and actually pulled it off. The tone was just right and corny in all the right ways, the new and improved cast and characters were interesting and fun, and the action sequences were all handled quite well creating a well-rounded G.I. Joe flick that definitely pleased the 10 year old fan in me. It’s also worth mentioning that Rhett Reece and Paul Wernik (writers of 2009’s ZOMBIELAND) wrote the screenplay for RETALIATION and are huge contributors to this film’s overall awesomness. 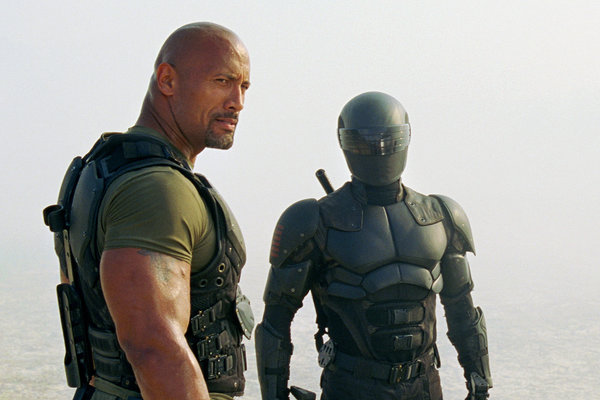 From the moment RETALIATION begins it’s obvious that it’s a much different beast than THE RISE OF COBRA. While the overall plot stays true to the original film (making it a true sequel), RETALIATION also serves as a fresh restart for the series mainly keeping what was cool about the last film and ditching the rest. Think FAST FIVE. And I must admit, it works. This film is really all about the classic ongoing battle between the Joes and Cobras. I like that very much. Sure the overall plot is simple enough, but it’s that classic battle between sworn enemies, a fun and corny scenario of world domination, and just the right amount of desperation from these characters that gives this film it’s edge towards being good instead oh “meh”. Basically, the Joes of old have been annihilated and marked as enemies of the state by Cobra and the surviving members embark on a journey to reclaim their name and ban together to stop Cobra and save the planet. Sounds like G.I. Joe to me.

As mentioned above, G.I. JOE: RETALIATION is a sequel and a revamp all at once. One big change is the cast of characters. The vast majority of the characters from THE RISE OF COBRA are gone (Thank god they ditched Marlon Wayans, phew) so you can say goodbye right now to Ripcord, Heavy Duty, Scarlett, Breaker, Baroness, and even Destro (even though HIS absence is noted in the film). And honestly, I don’t really give a crap. None of those characters were especially interesting or fan favorites of mine anyways. In their place we see a few returning faces in the form of Channing Tatum (THE EAGLE) as Duke, Ray Park (X-MEN) as Snake Eyes, Byung-hun Lee (THE GOOD, THE BAD, THE WEIRD) as Storm Shadow, and the return of Cobra Commander even though he is no longer performed by Joseph Gordon-Levitt. While Cobra Commander is Levittless in this one, I will say right now that they absolutely nailed this character and his costume. He finally looks like he did in the comics and cartoons and I can safely say they could not have designed his costume any better. Badasssssss! And while we are on the topic of costumes, Snake Eyes looks way cooler ditching the little lips that were on his mask in THE RISE OF COBRA that made him look goofy. All these returning cast members do a great job with their respective roles, Snake Eyes is as badass as ever (more on that in a second), and audiences now have the live action version of Cobra Commander they have been begging for. Very cool stuff, and it’s really great to see only my favorite characters from THE RISE OF COBRA return. 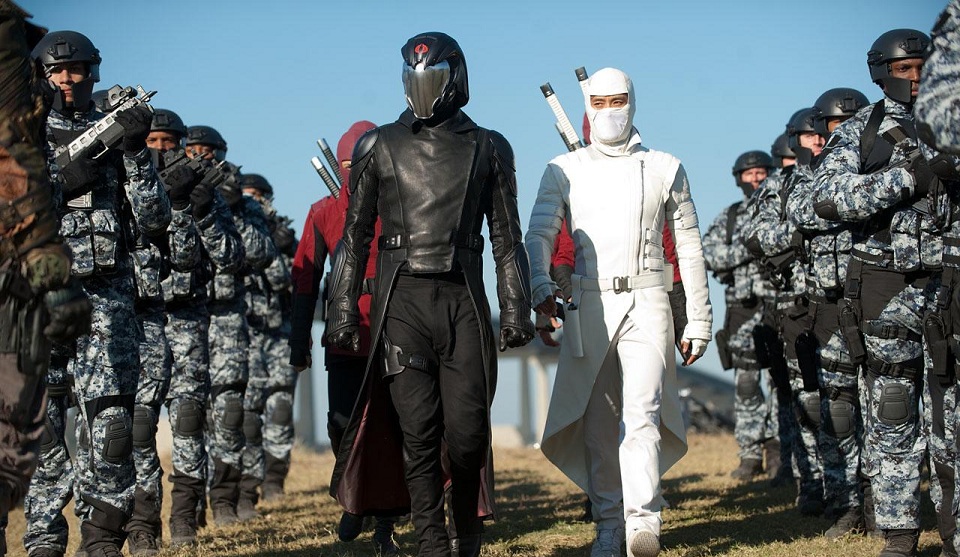 So all the cool characters from the first film crossed over, but what about the new guys and gals? In short, they really help make this movie what it is. Dwayne “The Rock” Johnson (SNITCH) joins the team as Roadblock and recaptures his leading action man status. Make no mistake, G.I. JOE: RETALIATION is a showcase for how Johnson can and is a great leading man in action films. He helped reboot the FAST & FURIOUS franchise and now he helped reboot the G.I. JOE franchise. This man is an action movie’s lucky charm. He had great screen presence and it looked like he really had fun with this role. Other new and welcome additions include D.J. Cotrona (DEAR JOHN) as Flint, Adrianne Palicki (RED DAWN remake) as Lady Jaye, Elodi Yung (THE GIRL WITH THE DRAGON TATTOO remake), Ray Stevenson (BOOK OF ELI) as Firefly, and Bruce Willis (A GOOD DAY TO DIE HARD) as the original “Joe” General Joe Colten. I gotta say that I enjoyed all of these new additions. While a few of them are just there to look pretty and kick ass, it is most evident that they all had a fun time shooting this picture. Seeing Johnson and Willis kick ass together as Joes was extremely rewarding and fun. I’d say the only real embarrassment here is RZA (THE MAN WITH THE IRON FISTS) who phoned it in as the Blind Master. I like the guy well enough, but this performance was out of place and unsettling. One final actor worth noting is Jonathan Price (PIRATES OF THE CARIBBEAN Series) who double as the President of the United States and Zartan. He pretty much served as the main villain in this film and constantly reminded us to not take things too seriously with his one-liners and overall cheese factor. It was great and welcome.

Now the real reason I forked over 12 bucks to see this film was the mindless action. Well, that and ninjas. I gotta say that the action was pretty spot on for me here. There were guns a blazing, explosions galore, some real cool vehicles that were far out but close enough to be believable, and one hell of a cliff side battle featuring a plethora of ninjas doing ninja things. I seriously think that having ninjas in this franchise makes it so much cooler than it would be without them. Dwane Johnson kicks all kinds of ass as Roadblock, seeing Bruce Willis do his thing as Joe Colton is fun, the villains are ruthless and eccentric, and did I mention there are freaking ninjas everywhere!? A small gripe of mine would be that, while his costume is perfect, Cobra Commander really didn’t do much but walk all bad ass in slow motion. I suppose he is titled a “commander” and not a “fighter”, but it would have been cool to see him do a little more to prove to us why he is the boss man. That said, the action here really is a blast and I cannot stress enough just how great the cliff side ninja battle turned out to be. Really worth the price of admission alone. 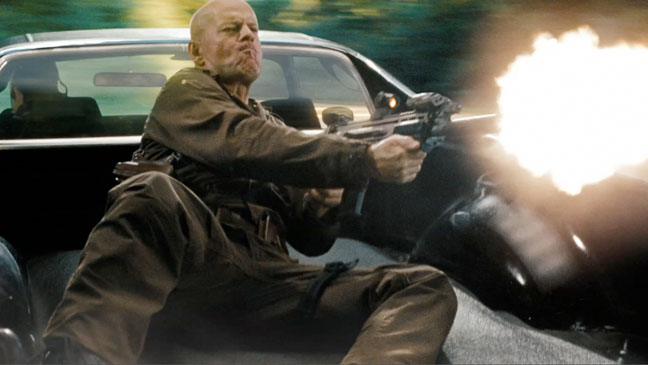 Once the credits started beating up my face, I realized that G.I. JOE was a really fun package and a gift to longtime Joe fans that wanted something a little more nostalgic and fun. The story was wafer thin, but classic enough to capture the spirit of the franchise. All the cast members from THE RISE OF COBRA that mattered return here along with a new set of heroes and villains that pleased and delivered. The ninja sequences are epic, Cobra Commander looks perfect, the pacing is spot on, and the fun factor here is above average assuming you go in with an open mind. I had a good time with G.I. JOE: RETALIATION and can recommend it to fans of the franchise and even to people that didn’t like THE RISE OF COBRA. This is a fresh restart for the live action series that had me thirsting for more. I will eagerly await the sequel that has already been announced due to the great ticket prices over the weekend. Got to get tough, yo Joe!