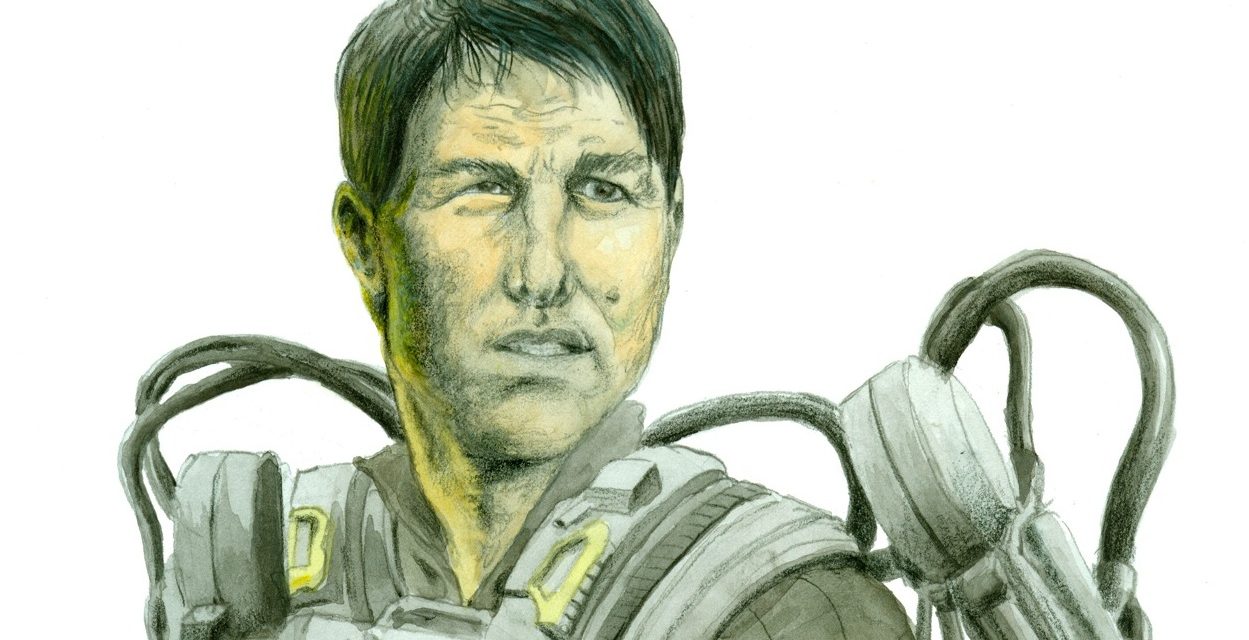 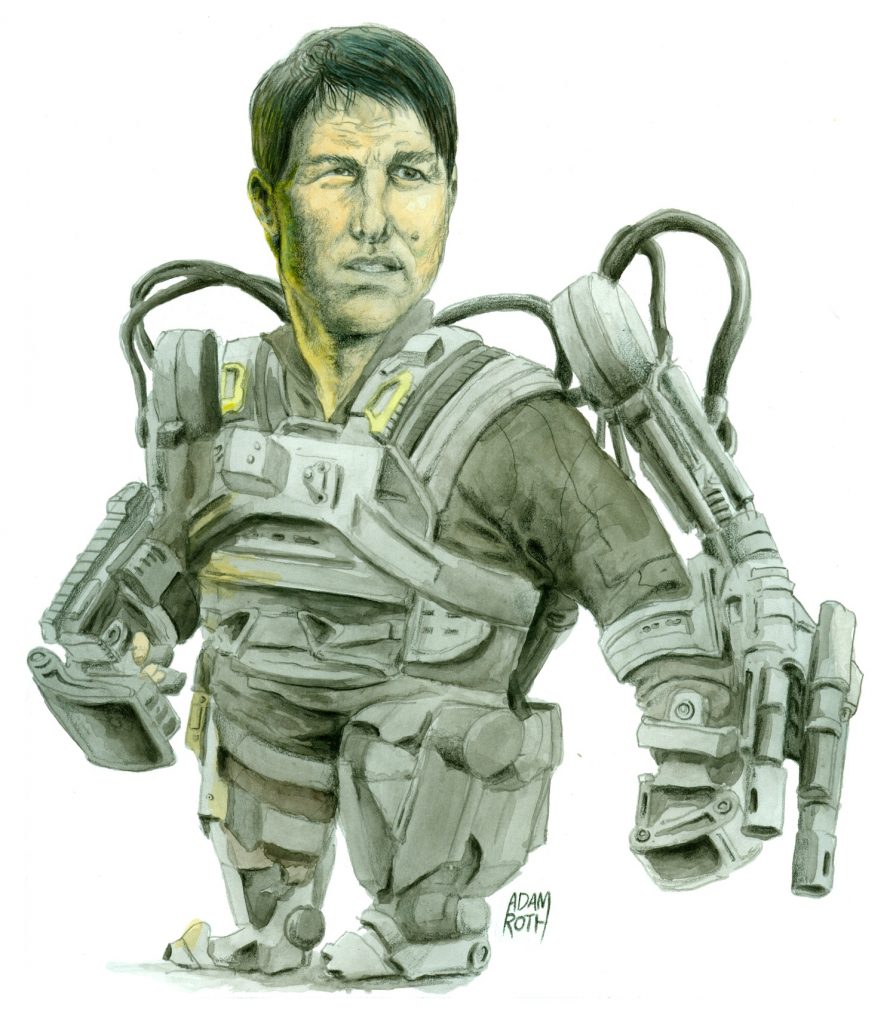 Let’s get our Nerd review on! I’ll be honest with you. I didn’t really know how to start off this EDGE OF TOMORROW review.  I definitely didn’t want to start off by comparing it to GROUNDHOG’S DAY.  Everyone is doing that and I don’t want this review to be like all the others. I mean,  I can understand why one would make that comparison. Living the same day, over and over.  Learning routines.  Acquiring new skills.  Trying to accomplish a specific task. Realizing that in order to succeed, you have to break the pattern and try a completely new tactic.   Shit. Where was I?  Oh yeah, starting off this review.  Okay, no go on the GROUNDHOG’S DAY comparison. Moving forward, I will talk about this movie as an original piece of Sci Fi.  Maybe I can start off by making some random joke about how EDGE OF TOMORROW had me on the EDGE of my seat… ?

Let’s get our Nerd review on! I did not expect to like this movie as much as I did.  It was intense.  The action was amazing.  Every death is kind of jarring. Tom Cruise’s deaths?  Oh.  He keeps dying over and over.  I’ll get to that.  Not only is the action amazing, this movie is funnier than I thought It’d be. It’s brutal in its constant murdering of Cage.  Oh. Tom Cruise plays a ‘Major’ named Cage.  Did I know mention that?  This movie was based on a short story named ALL YOU NEED IS KILL by Hiroshi Sakurazaka. If you don’t love this movie, you’re Tom Cruisin’ for a Bruisin’

Let’s get our Nerd review on! Hello, fellow Nerds! Mark Espinosa here with another NERD review for the new Tom Cruise Sci Fi romp, EDGE OF TOMORROW! This movie is pretty much if STARSHIP TROOPERS had an alien love child with GROUNDHOGS DAY and it was infected with aliens that resembled the sentinels from the MATRIX TRILOGY.  While Tom Cruise is the star of this film, he is one a few things that make this movie so outstanding.  Emily Blunt’s (LOOPER, THE ADJUSTMENT BUREAU) character of Rita, for example,  who helps Cruise’s character Cage navigate the time reboots, is as much a star of this film as Cruise is. The character of Rita who helps Cruise’s character Cage navigate the time reboots?’ Does that read right? Shit.

Let’s get our Nerd review on! Tom Cruise sure does love his Sci fi movies. Ever since MINORITY REPORT, Cruise seems to be gravitating towards leading roles that continually throw him into outlandish scenarios where he is either: alone on some alien planet fighting off an alien invasion, stranded with his kids and fighting off an alien invasion or running around with somebody else’s eyeballs in some futuristic totalitarian landscape.  While EDGE OF TOMORROW may appear to be just another Sci Fi action-er for Cruise, the range and emotion depth of his character is far beyond what we’ve seen from him in a while.

The premise of EDGE OF TOMORROW is simple enough to understand.  The Earth is at war with a race of alien tentacle beings, named Mimics.  They are called ‘Mimics’ because they seem to adapt and advance with every conflict they have with the humans. As they slowly conquer Europe, it is clear that the complete annihilation of the human race is near.  The Mimics seem to have a very unique ability to predict our every action and appear to be an unstoppable force. Every excursion against them (except for one) seems to only result in massive casualties. Tom Cruise plays Major William Cage, an Army public relations officer (formerly of an advertising company) who willing stands in front of a television cameras and exaggerates how things are going. It’s not so much that he is a bad guy, but, more of a cowardly guy.  You sympathize with him because you can see that the human race is completely out numbered and he’s just simply trying to stay alive.  After being called out  for his unwillingness to fight alongside the troops he willingly sends to their deaths, Cage is bumped back down to Private and sent out on a ‘D Day’ type beach raid against the Mimics.  If you’ve seen the trailer, you know that this battle doesn’t go very well. After dying embarrassingly fast, Cage fuses with one of the ‘Alpha’ alien’s ‘life force’ and gains their ability to repeat days. And there it is.  Realizing that each day seemingly resets upon his death, he continually tries to break free of the cycle of death that he has found himself in. Cage eventually tracks down Rita Vratask (a unstoppable military bad ass) who understands what Cage is experiencing, teaches him how to use his new found ability, and to become the ‘weapon’ our world needs him to be.  Rita, having also once been trapped in a time reboot situation, reveals to Cage that the only way to defeat the aliens is to defeat their energy source. The big twist at the end is that they realize that

Nerd review on! What makes EDGE OF TOMORROW so damn good is that it quickly establishes its premise and never veers too far away from it. Each time-reboot is streamlined and dealt in a manner that prevents it from becoming monotonous. The movie never becomes so grand that you slowly lose track of what’s happening and subsequently, lose interest. As the storyline advances, so does the movie’s ability to easily explain what is happening and why. One of the obvious differences between this and other ‘Im doomed to repeat the same day over and over’ movies, is that the only way the day resets is by actually dying. So, in order for Cage to become more efficient and effective, he has to keep dying.  And he has to die a lot.  Having Rita fully understand his situation, allows for her to catch up quickly and move ahead with very little convincing.  (Some of the best parts are watching Cage learn how things play out and watching him maneuver through scenes perfectly) You quickly realize that this movie is not so much about dying, coming back and repeating the same day, but rather, it’s about experience.  Learning patterns is only one step. While the premise of the movie is amazing, the premise ends up not being the thing that makes this movie amazing.

Damn, I was not expecting to like this movie as much as I did! You think you know going in what to expect and it far exceeds that.  It’s a movie about watching the main character die over and over and yet, it still finds a way to make you worry about the main character dying.  It shows how easily each character can die that when they venture into new territory, you find yourself on edge.  Emily Blunt is amazing.  I was afraid that they would turn her into a damsel in stress, but, she fights hard to never let Tom Cruise put her in that role.  Even when he tries to protect, she manages to finds ways to sacrifice herself for what she believes. Bill Paxton has a minor role in this movie and he almost completely steals every scene that he is in. Emily Blunt never missteps and definitely holds her own. One of the funnier moments of this movie is watching Rita continually murdering Cage so that they can ‘restart from scratch.’. EDGE OF TOMORROW is the Sci Fi action movie true Sci Fi fans deserve and you seriously owe it to yourself to check it out.  Don’t go in thinking you’ll know what to expect, because the movie is way better than you think it is. Knowing the premise will only get you so far, actually experiencing the movie so much m0re.