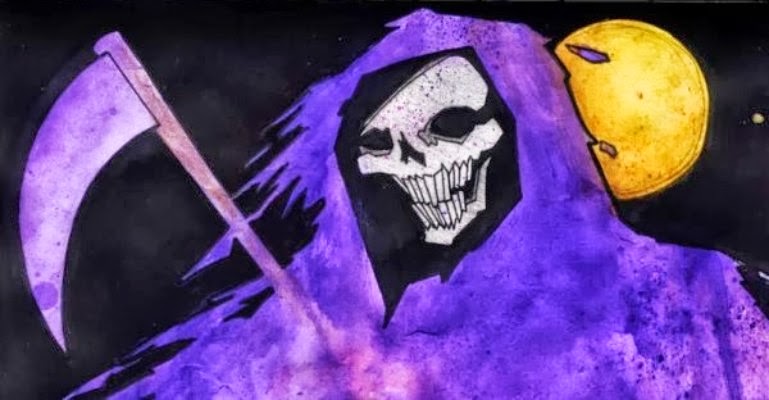 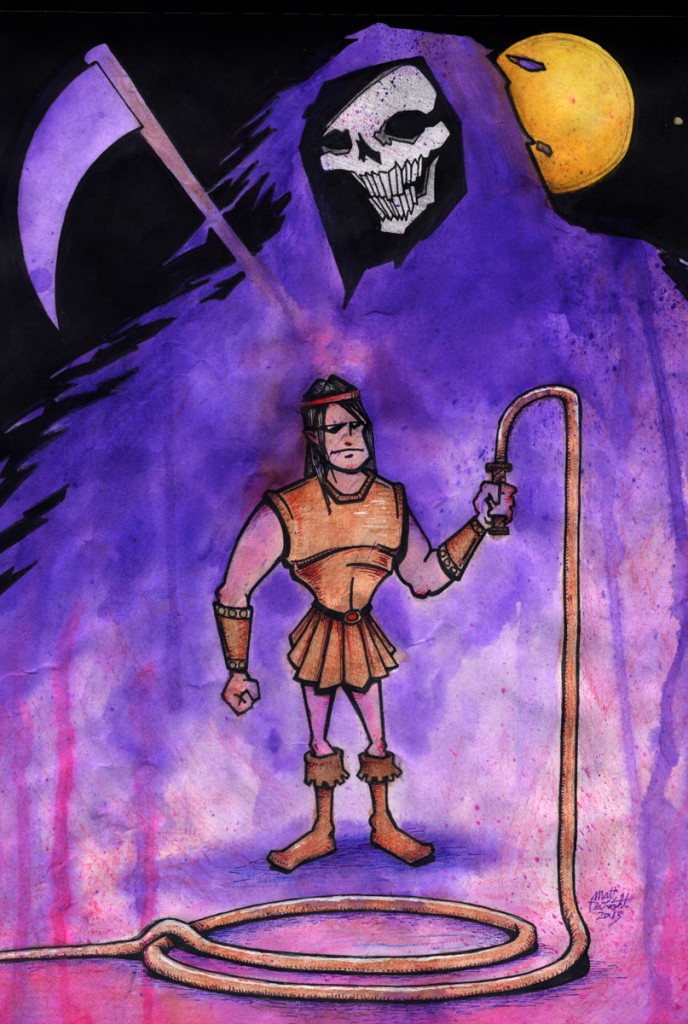 CASTLEVANIA: LORDS OF SHADOW – MIRROR OF FATE  is a difficult game to put your finger on. As I sat thinking about how to review it my main feeling was one of ambivalence. If a game is great or if a game is awful at least you have something to hang your hat on. But what if it’s neither great nor terrible? That’s the newest CASTLEVANIA on the Nintendo 3DS from Spanish developer Mercury Steam in a nutshell. A handful of scattered highs get lost in sea of uninspired or merely adequate design choices. The bulk of the game ends up being something to be played by rote, offering the vague satisfaction of progression inherent to the genre, but without any individual element giving players a true hook or elevating the experience into more than the sum of its parts.

MIRROR OF FATE attempts to cross traditional side scrolling CASTLEVANIA with the combat of its PS3 and Xbox 360 predecessor LORDS OF SHADOW. The effect is something vaguely along the lines of combo heavy 3D action games like DEVIL MAY CRY or GOD OF WAR. It’s a side scrolling “2.5D” action game with polygonal graphics. While the developer cites franchise classics CASTLEVANIA III and SUPER CASTLEVANIA IV as influences, only a few remnants of their style remain and the game ends up erring more on the side of its combat-centric brethren. The idea of blending the two styles has some merit, but MIRROR OF FATE ultimately doesn’t take full advantage of either. There are a few attempts to capitalize on series nostalgia like the giant creaking gate at the castle entrance, but more often there’s a curious lack of iconic details like whipping candles or breaking a wall and finding a hunk of life giving meat. Instead the game again leans towards familiar conventions of modern 3D action/adventure games, like fountains or chests of energy that require button mashing to open, or randomly placed barrels scattered about the environment. This is true of the art direction as well, which almost echoes a LORD OF THE RINGS fantasy aesthetic more than the monster movie influence of the classic level based Castlevania games or so-called “Igavania” games on previous Nintendo handhelds. 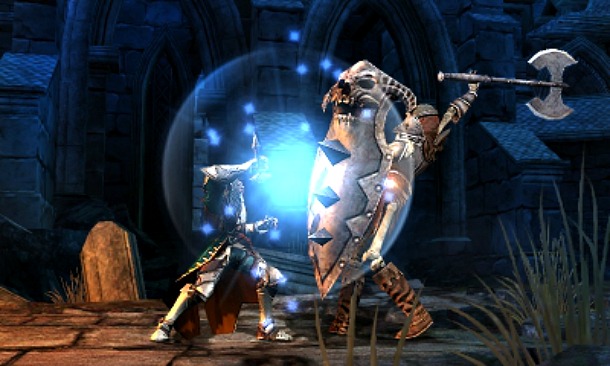 Combat is a bit underwhelming as well. It’s serviceable, but that’s faint praise for a gameplay system that forms the foundation of the title. The traditional whip has been ditched in favor of the combat cross, which serves the same basic function. Each of the three main characters you play as has a set of stronger short range attacks and weaker long range attacks at their disposal. Defeated enemies drop magic, health, and experience points. The latter carries over between characters, lending a light RPG aspect, although the progression of abilities is entirely linear, with each level gained unlocking one new move or combo. After the core mechanics are introduced and you try various approaches it turns out the same few long range attacks prove the most useful in nearly any situation, reducing most fights to a similar pattern of softening adversaries from a distance before going in for the kill. Initially timed blocking is presented as one of the basic elements of combat, with enemies telegraphing their strikes with a bright flash, in turn signaling players to guard and counterattack. In practice however a few frames of animation where the characters raise their arms makes executing the move unintuitive and inconsistent, and it quickly becomes apparent that dodging backwards and avoiding attacks is more efficient than gambling on an awkwardly timed block.

The narrative spans 3 characters, Simon Belmont, Alucard, and Trevor Belmont, their stories overlapping at certain junctures. Aside from a small handful of unique abilities their move sets and most recent level gained overlap so that each character’s play style ends up indistinct from the last. The story itself is fairly nonsensical and uninvolved, but at least Mercury Steam had the good taste to treat it as an alternate take on the universe. The occasional cut scenes, which have a more flat shaded comic book inspired look, feature some interesting visual touches especially with 3D cranked up. During gameplay the graphics hold their own reasonably well, although there’s a monotonous quality to the colors and dungeon-like design regardless of what part of the Castle you’re trudging through. The palette is generally too uniformly dark, making playing the game when you’re in direct light a strain on the eyes. There are also times when the depth of certain platforms or background elements comes into question, even with the 3D effect on, and especially when playing in 2D mode. Fortunately there are only a handful of instances where this affects gameplay. 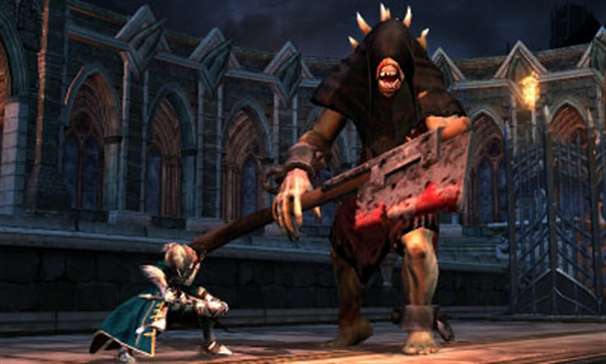 The boss battles range from mediocre to surprisingly decent. Most follow the same combo dodge pattern as common enemies, but every once in blue moon the environment and your collective abilities factor into the fight, which makes for some of the more varied and engaging moments of the adventure. If this sort of inventiveness had found its way into more aspects of the design it could have worked wonders for MIRROR OF FATE. As it stands platforming is remedial, especially for the first 1/3 of the game, and traversing the environment becomes a slog with minimal incentive to explore outside of a handful of optional upgrades which always have the same predictable effects (extending your health bar, magic meter, etc.) It’s possible to go off the beaten path, but the way the game funnels you along towards the next objective it’s almost always better to just wait until you gain all of a character’s main abilities then teleport back to unfinished areas. Going back with only one or two new tricks up your gauntlet tends to yield relatively little, and the slow paced traversal makes revisiting the same part of the map multiple times a chore. The lack of anything to engage players beyond the most basic platforming makes even minimal exploration feel lifeless and redundant, particularly when combined with repetitive combat encounters comprised of pummeling enemies like sacks of potatoes. Long gone are the more engaging pattern based enemies and challenges specific to each area’s terrain which created the pop and stop rhythm that helped elevate the original CASTLEVANIA games to legendary status.

That said, I have to confess that for all its faults MIRROR OF FATE manages to scratch a very particular sort of itch if you’re obsessed with the genre or just have a morbid need to see the newest interpretation of the CASTLEVANIA formula. Perhaps you’re hungry for a middle of the road action adventure title and don’t care about replay value. If that’s enough to whet your appetite then consider giving MIRROR OF FATE a rental or picking it up when it hits the bargain bin. While it fails to meet the lofty standards of the series at nearly every turn, it still helps fill a certain niche for those looking for another side-scroller to fill out their 3DS library and grind though on bus rides without too much thought. It’s difficult to recommend to anyone but diehard fans at full price, but if you manage to pick up on the cheap and go in with tempered expectations it might be worth indulging in a little Gothic romp through Dracula’s castle. 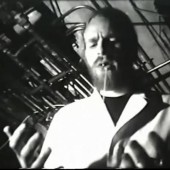