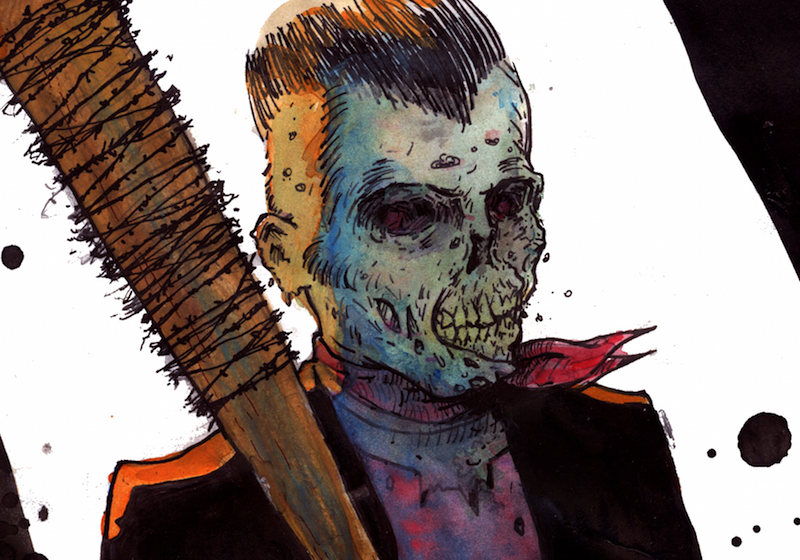 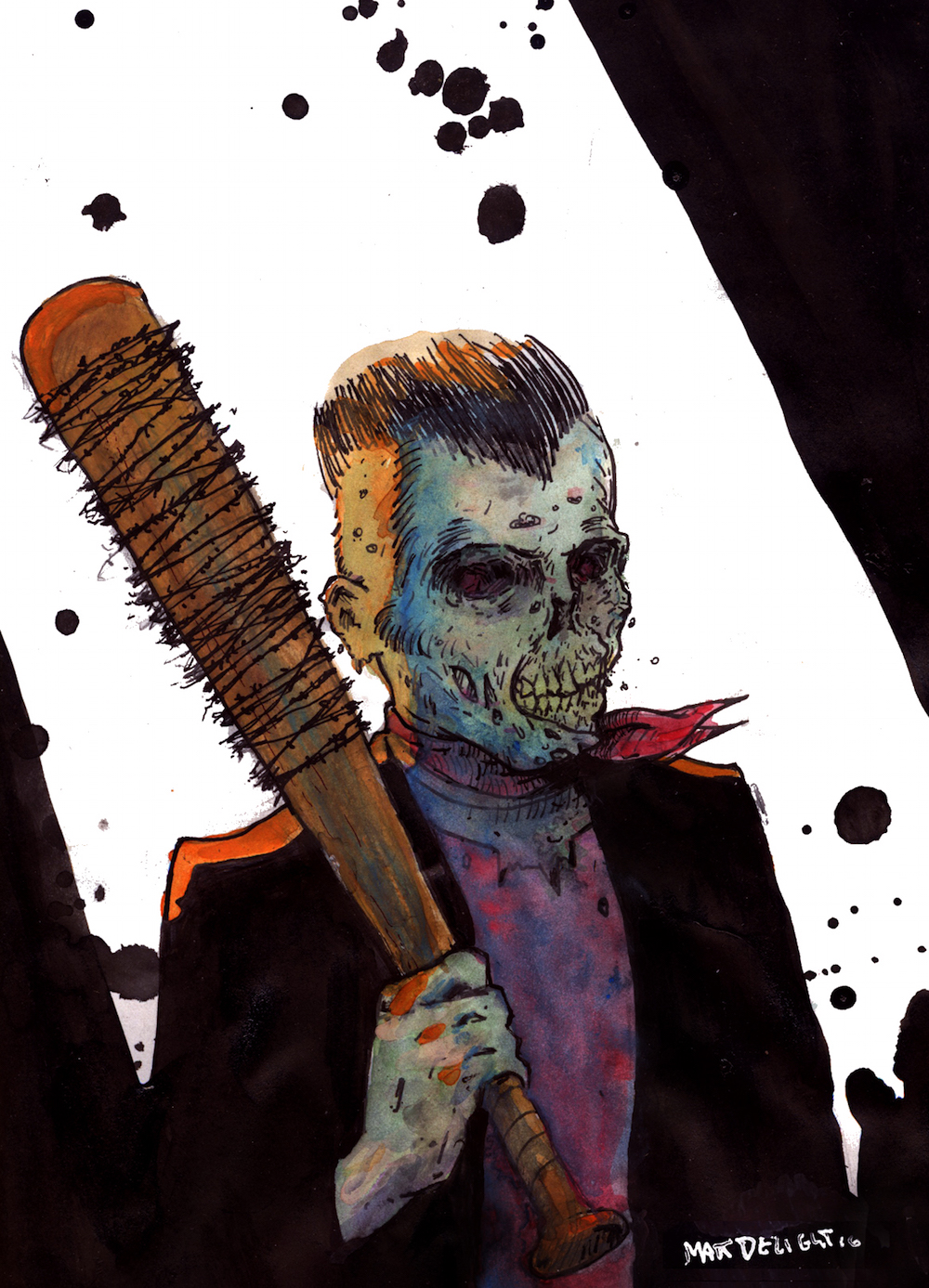 BEWARE: Some good old TV and Comic Book spoilers inside for the weary. Enter at own risk.

Which season of THE WALKING DEAD is this again? 6?  That’s it?  Are you sure? Hersel’s farm was like, 30 years ago…

The difficult part about reviewing any season of THE WALKING DEAD is that it feels like their damn seasons go on forever! The first episode of season 6 aired on October 11th, 2015 and its season finale aired on April 3rd, 2016. That’s 6 whole months! Wait, isn’t that the normal length of time for a sitcom season? The first episode of season 6 picked up right after that bloody town hall meeting where Rick capped that dude right in the meat hat.  Do you even remember that?  That abusive husband (who’s name I can’t remember) came staggering into the town square and killed Deanna’s husband (who’s name I can’t remember) with Michonne’s sword. Rick ended up gunning him down in front of all the Alexandrians and the dude’s wife.  I can still see that look on Morgan’s face. Then Rick started hooking up with that dude’s wife. That was this season?  It’s weird because when I think back, the only thing that comes to mind is a bunch of walkers breaching Alexandria’s defenses and the hunt for Negan.  The Wolves came and went.  Glenn died.  Glenn didn’t die. Morgan’s flashback with Eastman. Carol’s realization about how far she’s fallen.  Maggie’s rise to leadership. Jesus. Carl’s missing eyeball. Did Rick get infected from a cut on his hand from a zombie knife? Season 6 was full of all these little amazing moments and they all ended up getting overshadowed by unnecessary cliffhangers and the frustrating season finale.

One of the more noticeable changes to the story style of THE WALKING DEAD this season was an increase in ‘fake-outs.’  Aside from Glenn’s not-so-much death, this season seemed to implore a new technique of heavy highhandedly showing the audience one terrible thing and then eventually revealing that they were just pulling our leg. Glenn’s death.  Daryl’s death. Carl’s death. Lets trick everyone into thinking their favorite characters are dead! Glenn just got ripped apart by zombies!  Never mind. He’s fine.  Yeah.  I know he’s fine.  You’re not going to kill one of your main characters in some random, meaningless way. I understand that, sometimes, people just get bit or a random arrow pops out their eye ball.  But, we all know better, don’t we? Your drama is pointless and makes an episode like Morgan’s flashback with Eastman frustrating because we were all so desperate for resolution with Glenn.  A FLASHBACK?! NOW?! TELL ME WHAT HAPPENED TO GLENN.  I’m thinking about dumpster nonsense, when I should have been appreciating one of the WALKING DEAD’S best episodes ever. ‘Needless Deception’ is the new name of the game.

This season started off with a massive horde of walkers that the crew had to corral away from Alexandria.  All this and the repeated assaults from the Wolves, the first part of the season did an excellent job of taking the weak Alexandrians and turning them into survivors.  We got to see Rick’s heavy handed fist turned into a strong supportive nudge. I’m trying to think about what else happened this season, but, all I can think about is ‘who did Negan end up killing?!’  Rick and Michonne started hooking up.  Carl lost an eye.  Another one of television’s few LGBTQ characters was randomly killed off. That annoying white family got ate up during their escape through the horde.  Daryl can’t let shit go. Maggie may have a zombie baby inside of her.  There are other communities out there. The amazing disappearing Jesus. Morgan is building the cell that will, eventually, house Negan. I think. Glenn had his first kill and it was cold blooded. Lucille.  I think those armored horse back riding dudes are going to be part of an army that are going to take Negan’s army down. What am I missing? I’m sorry, but, we have to talk about who we think Negan killed.  I’m sorry Season 6.

Obviously, it’s not Carl or Rick because of Negan’s line about ‘feeding his eye to his father.’  Who does that leave? What would psychologically happen to Sasha if another man she loves is killed right in front of her eyes?  What would happen to Abraham if he loses Sasha?  I know Aaron isn’t much of a recognizable character, but, I really don’t want AMC to kill off another one of their gay characters.  We all know who Negan kills in the comic (Glenn) so, it seems unlikely that the writers would go down that path.  Especially after teasing us with a baseball bat death for Glenn while they were trapped in Terminus.  The mission was to get Maggie to the Hilltop and I still believe Rick will do that. Michonne? Besides the introduction of her becoming Rick’s lover, It would be horrible to kill off such an important character after a season where she was victim to such mediocre story arcs.  Who does that leave?  Eugene, Daryl and Rosita.  You could argue that Abraham parting ways with Rosita could indicate her doom. Daryl?  I know people will literally burn down the internet if this was the case, but, it’s also where I’m tempted to bet my money.  The last few episodes found Daryl fully embracing his inner ‘Ahab.’  He had so many chances to walk away and never did.  His death would be major and devastating and would set up story lines for almost every character. Then there’s Eugene.  The most likely choice.  He’s never really been that much of a popular character on the show.  The second part of the season saw him somewhat redeem himself.  Plus, he handed off the instructions for making bullets to Rick right before they parted away.  Cliffhangers.  I hate em.