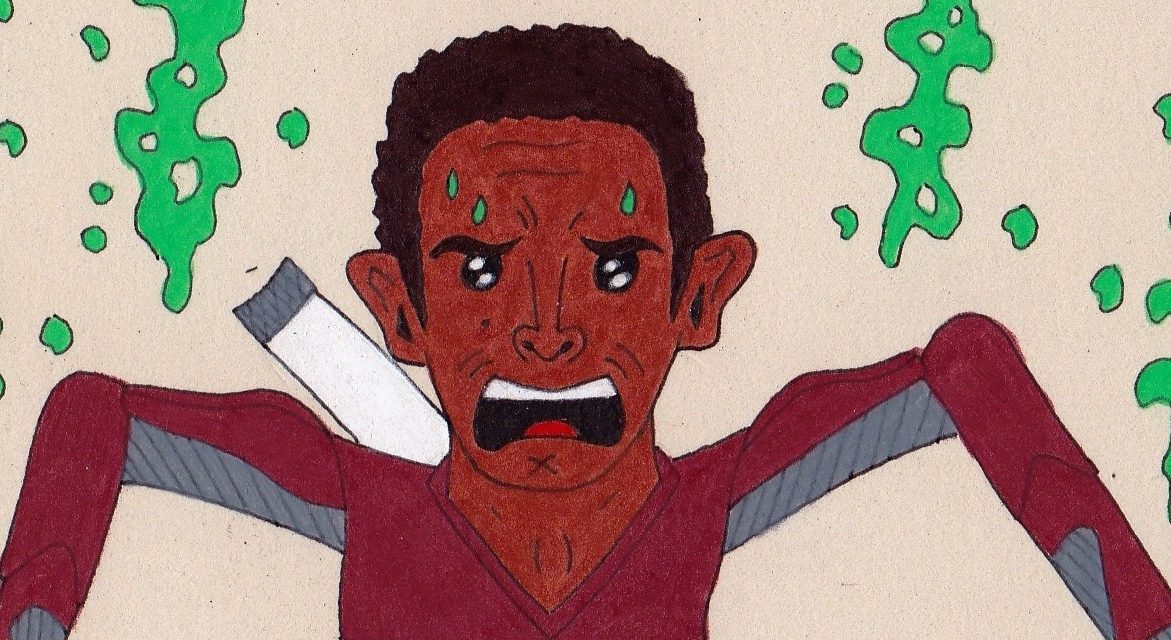 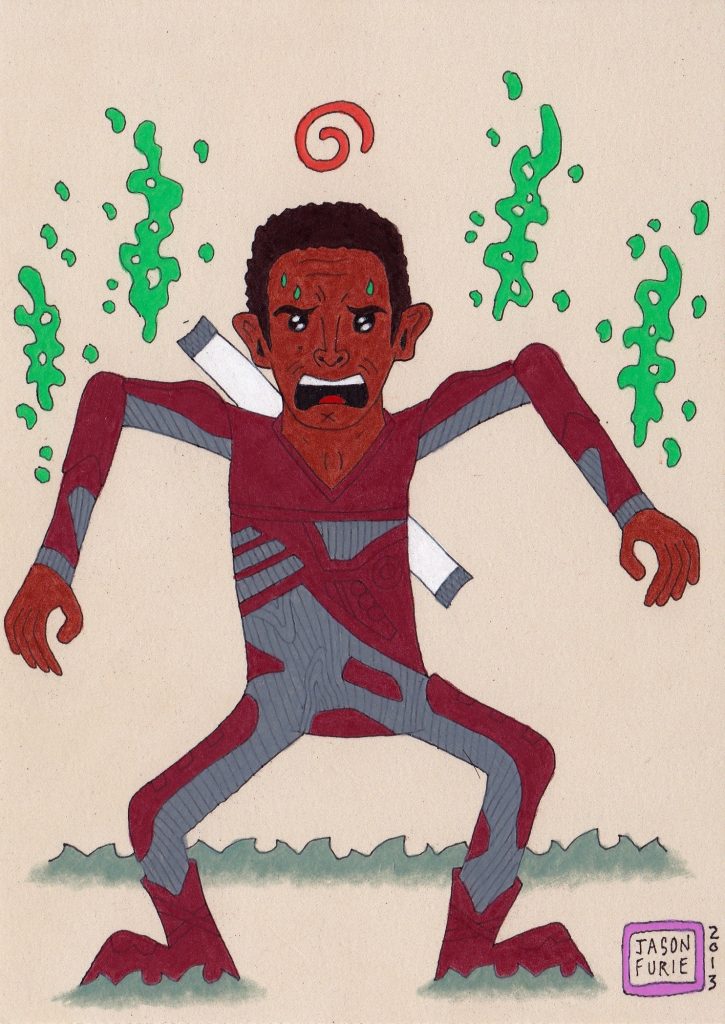 I know fear. Of course I do. To live is to know fear. It is as much a part of us as it is to breath. That unknown terror that lurks in the shadows. The hand that grabs your foot as it dangles off your bed.  The cold breath on the back of your neck as the lights go out.  A spider in your shower.  A clown in your closet.  No wifi connection at the airport.  Fear keeps us alive and away from the things that would do us harm.  What happens when the things that wish to do you harm, are able to use your own fear against you? Oh snap!  What if the only way to defeat them is to overcome your own fear? Could you do it? Could you survivor Earth, After Earth?

Hey! Did you know that M. Night Shaymalan directed a scifi movie, starring Will Smith (INDEPENDENCE DAY) called AFTER EARTH?  No? You didn’t? Well, I can easily see why you wouldn’t know that.  This is the first M. Night movie, since SIXTH SENSE, that hasn’t included his name above the movie title. Which was a very obvious and purposeful decision on the part of the studio. After THE SIXTH SENSE and UNBREAKABLE, M. Night was set to become one of Hollywood’s most iconic directors. Even SIGNS was seen by many as one of his best works. Then, THE VILLAGE happened. Now, I will defend that movie almost as hard as I defend THE MATRIX RELOADED. It was suspenseful and unnerving.  It was also formulaic and predictable. AFTER EARTH was meant to prove that, despite a few bombs, M. Night still had greatness in him. That THE LAST AIRBENDER and THE LADY IN THE WATER were just the products of too much studio interference. Unfortunately, AFTER EARTH may prove to be yet another black mark in the book of one of Hollywood’s most unexpected fall from graces. 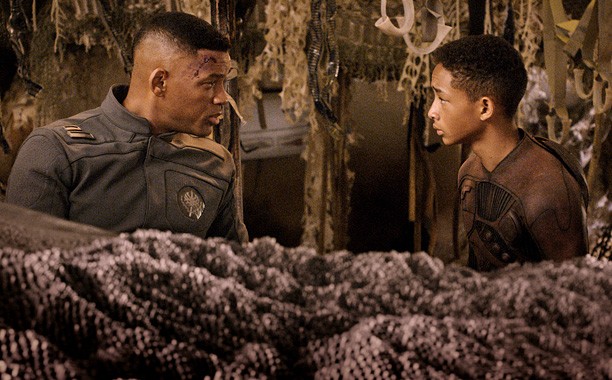 Lets just get down to it, shall we? Is AFTER EARTH a bad movie? That’s a really hard question to answer. I guess that really depends on what you are expecting. Despite some missteps in his career, people still generally expect good things from M. Night (Seriously, the trailer to THE HAPPENING may be one of the craziest things I have ever seen). I still expect good things from him. The kid’s got talent, that’s obvious. Lets not forget that this is a summer blockbuster starring Will Smith and his son Jaden (THE KARATE KID Remake) as a father and son who crash land their future spaceship on a hostile and abandoned Earth.  This movie isn’t entirely bad. You won’t mind it. I didn’t mind it. I would have minded it even more if it came on at 2am during some bad movie marathon and I was up too late because I took a ‘too long’ nap after work and I have off the next day and I am slightly tipsy and/or intoxicated. What I’m trying to say is, don’t go into this movie expecting the return to the era of SIXTH SENSE. See this movie if you’re expecting a scifi movie with a decent plot that’s slightly entertaining. Don’t expect the summer blockbuster of your dreams, because I’m afraid you’ll be sorely disappointed.

Okay, about the plot. Listen to this and tell me you would change the channel on this movie. AFTER EARTH tells the story of humans 1000 years in our future. After abandoning Earth, the planet has slowly transformed into a landscape that is extremely unfriendly to us soft bellies. We can’t breath the air and all the wildlife has evolved to kill humans. Which, is weird because there are no humans left on the planet for them to evolve against. The nights are too cold and the days are too bitey. Will and Jaden crash land on Earth. Will breaks both his legs and sends Jaden out to retrieve some beacon on the other side of the planet. Young Jaden must maneuver angry apes, giant bird eagle creatures, saber-tooth tigers, some poison bugs and an alien that hunts humans by tracking their fear. Will Smith has developed a technique called ‘ghosting’ that involves suppressing all fear that renders you invisible to the Ursa.   A technique that may prove the deciding factor in whether young Jaden succeeds in their rescue or succumbs to the claws of Earth’s new animalistic hierarchy. In a world where fear is a choice, will young Jaden learn to control his emotions and survive Earth after Earth? You’re lying to yourself if you tell me you wouldn’t watch a movie with that premise. You would watch it and probably would never think about it ever again. 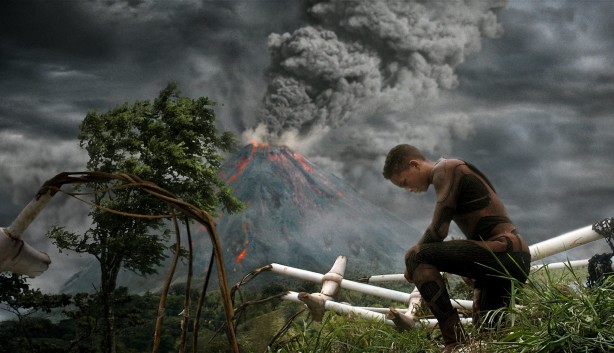 AFTER EARTH may be considered a summer blockbuster, but it is nowhere near the level of STAR TREK 2 and IRON MAN 3. None of Jaden’s character’s actions and reactions make much sense. I found myself hoping he would just fall off a cliff or getting eaten by some giant future sloth. The dialogue seems unorganized and Jaden Smith’s acting is … uncomfortable. M. Night continually drives plot points down your throat and spoon feeds you every piece of foreshadowing. Also, why the hell does space technology break so easy? I drop my cellphone in a box of mouse traps and all it does is accidentally call my mother at 5 in the morning. I was hoping the effects and landscape in this movie would make up for a lot of the films shortcomings, but even the CGI is disappointing at times. Don’t get me wrong, there are plenty of good things in this movie. The animal designs are pretty great. The technology is pretty clever. Will Smith does an excellent job as the emotionally disconnected father who is really is trying really hard to bond with his disappointment of a son. Jaden’s space suit is pretty cool, even though I had no idea how it worked.  The overall plot is still compelling enough to keep me entertained, despite everything else trying really hard to change my mind.

Overall, AFTER EARTH is a fun movie, but, I fear the M. Night Shaymalan we all know and love, may be gone forever.