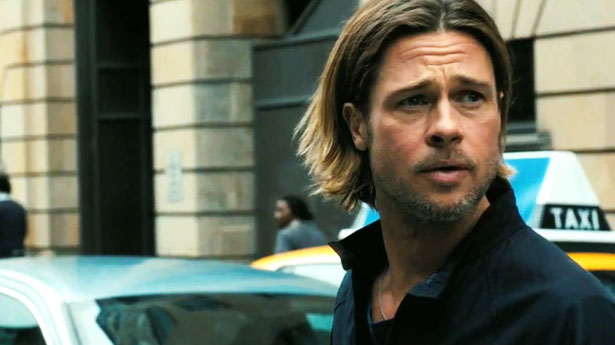 It’s not unusual for a film production to call some of its cast back for reshoots. A scene here, a scene there isn’t out of the norm. But back in June when we read the Brad Pitt (LEGENDS OF THE FALL) zombie apocalypse vehicle, World War Z, was to incorporate an additional seven(!) weeks of reshoots more than a few eyebrows found themselves defying gravity. Difficulties were nothing new to the production as it took a long time for the film to get out of development hell. Sometimes that’s just the path to making a $150+ million movie. Some movies rise above their growing pains and some do not. What will be the fate of World War Z? Let’s get a glimpse of what is to come.

And by glimpse, I meant a detailed perusal. The people behind this trailer (like many contemporary ones) throw everything at the audience in an effort to hook it in. Studies probably show that this works for most moviegoers (who don’t mind having plot and twists and visual money-shots spoiled) or marketing departments would go back to teasing instead of announcing (an example of a trailer that lays out the tone without spoiling plot).

Here we have a massive alien invasion type of movie set in a gigantic city with the exception being that they are zombies. The trailer does not divulge the identity of the threat but those familiar with the source material (a novel) or follow movie blogs know it to be the undead (and those that did not know will surely be told in subsequent marketing efforts). World War Z looks like it has the hotly debated “fast” zombies but seems to implement it interestingly as a  horde full of team spirit. Done properly this could be a cool storytelling trick but done poorly it can resemble the fire ants from Indy IV.

Whether it’s a CGI fest or not (looks like it will be) doesn’t matter as long as the character and story are compelling. The trailer gives off a been there, done that vibe (Independence Day or War of the Worlds anyone?) with the dad who must protect his family from the evil threat but ultimately must save the greater good through his unique set of skills (possibly ex-special forces). Cliche plot in a big budget summer film does not a bad movie make, however, as long as it’s having fun. Brad Pitt has charisma for days and given the right director he can definitely tap into it (Ocean’s movies). The wild card is this movie’s director, Marc Forster. He made his name directing small domestic dramas and recently added action to his trade in 2008’s much-maligned Quantum of Solace. Can he walk away from said movie’s dreary tone and deliver an intensely fun yet suspenseful summer blockbuster?