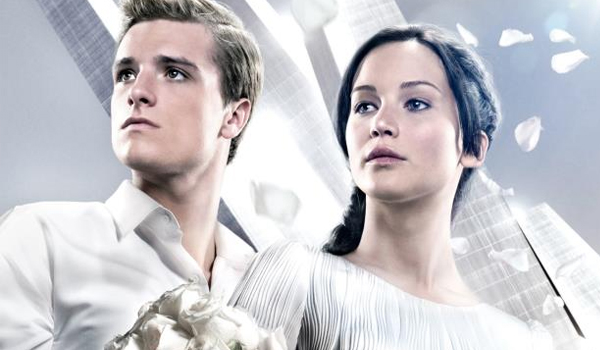 Yes I’ve read all the books and yes I had a pretty fun time with 2012’s first film adaptation THE HUNGER GAMES. Sure it may still have a bit of the old “you ripped off BATTLE ROYALE but just toned it down for a broader audience” syndrome, but it’s all good fun still. Everyone copies everyone, get over it.

The sequel titled THE HUNGER GAMES: CATCHING FIRE, picks up right after the events of the first film and seemingly jumps right into the action. Gary Ross (PLEASANTVILLE) steps aside as director being replaced by Francis Lawrence (CONSTANTINE) who has committed to finish out the series. I think he will be a much better fit and has already proven to audiences that he can handle a good action sequence. Check out all the hijinks below with the official plot synopsis and debut trailer.

THE HUNGER GAMES: CATCHING FIRE begins as Katniss Everdeen has returned home safe after winning the 74th Annual Hunger Games along with fellow tribute Peeta Mellark. Winning means that they must turn around and leave their family and close friends, embarking on a “Victor’s Tour” of the districts. Along the way Katniss senses that a rebellion is simmering, but the Capitol is still very much in control as President Snow prepares the 75th Annual Hunger Games (The Quarter Quell) – a competition that could change Panem forever.

Alright. I can get excited for this now. I really enjoyed the addition of Philip Seymour Hoffman (THE MASTER) as Plutarch Heavensbee and his conversations with the already evil President Snow (Donald Sutherland; ORDINARY PEOPLE). While we did not see a great deal of action here, it really sets a darker tone that I felt the first film lacked. It will be exciting to see if the action that fans expect out of this sequel can match the quality of the tension and darkness that this trailer revealed. Only time will tell, and you can bet your bow and arrow wielding ass that once a new trailer hits you can check it out here at Never Ending Radical Dude!