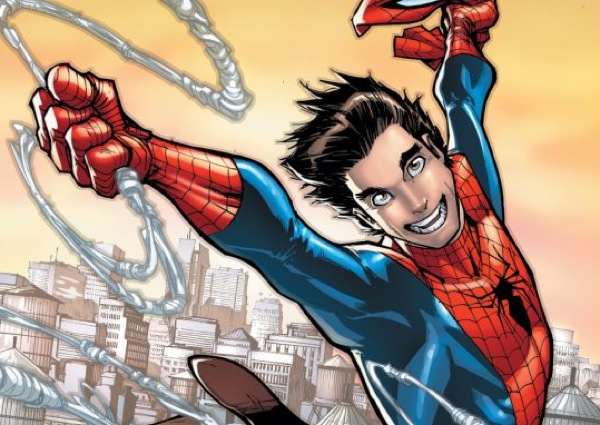 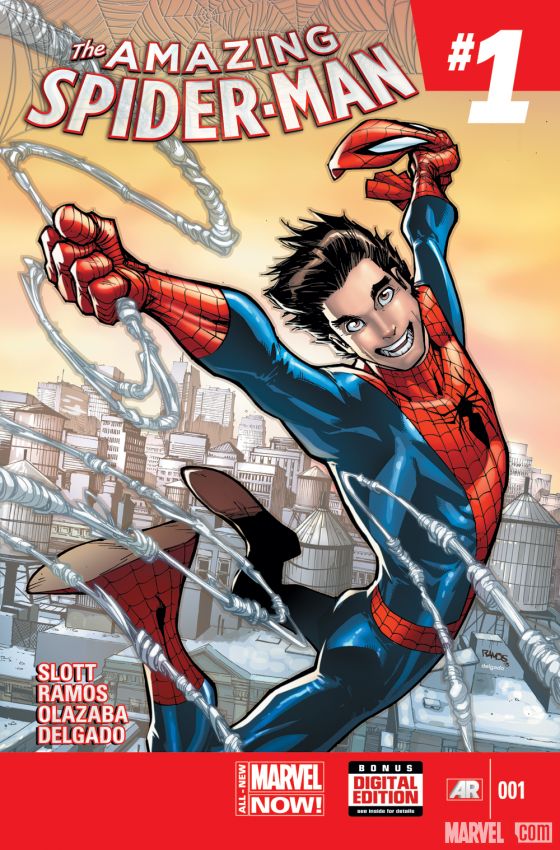 Peter Parker is back!!
And… he’s naked…

Alright, nerds.  Is it safe to assume that, if you’re reading this article, you know that Doc Ock squirmed his little ‘bowl cut’ of a brain into the head of Peter Parker and has been swinging around in his body for the past year? Right? Well, In case you’ve somehow been able to successfully dodge all the info about Spider-Man for the past year, here’s an awesome SUPERIOR SPIDER-MAN write up by Mike McG.  Go ahead and read it and then come back to this article. No, it’s fine.  I’ll be here when you get back.

You’re back?  How crazy is all of that!?  It all still keeps me up at night. It was such an intense ride. Dan Slott is either a devil or an angel or both.  I’ve never been more frustrated and excited about a comic book in my entire life. It was such an amazing ride and I wouldn’t have changed a thing. I’ve been a Spider-Man fan since for as long as I could understand how to read a comic book and I just had to sit there and watch as one of Spidey’s greatest enemies took liberties with his physical form. Gulp.

MY PETER IS FOREVER UNCLEAN!!

When SUPERIOR SPIDER-MAN first started over a year ago, all I could think about was the comic that had Peter back behind the mask and back in control of his life. The book that had Peter cracking jokes and being heroic. Watching him selflessly protect an entire group of civilians while simultaneously making a complete fool of himself.  (Seriously, only Peter would stumble across a villain whose ability allows her to control fabrics, which would result in him being pressed, completely naked, against a glass elevator.) AMAZING SPIDER-MAN #1 is the book I imagined every time I saw SpOck murder a villain or berate the people most important to Peter. I knew that one day, Peter would be swinging over the city in the classic ‘red and blue’ and everything would be right with the world.  Around the halfway point of SUPERIOR SPIDER-MAN, it started to become painfully clear that Peter wasn’t going to be able to just swing right back into his life.  He would be returning to a city that no longer believed in him.  To allies that no longer trusted him.  A family that distanced themselves from the crazed person he had become. It wouldn’t be as simple as just telling the world ‘Yeah, Doc Ock was in control of my mind and body, so, can we all just forget the past few months?’ The ramifications of SpOck’s actions ripple so deeply through both Peter’s personal and superhero lives, that a grand reveal is out of the question. Which means that Peter will have to tackle each problem as it comes. First off, seems to be figuring out a way to handle SpOck’s girlfriend, Anna Maria. THE AMAZING SPIDER-MAN #1 is the introduction to the next set of hurdles that he will have to overcome. While Peter, naively and care-freely, celebrates being back in control, we can’t help but notice the dominoes slowly tumbling in his direction. (Shown more specifically in the side stories of Black Cat and Electro that serve as epilogues to AMAZING.)

The relaunched of THE AMAZING SPIDER-MAN will not be just the book that brings Peter back, it will be the series that has us, and Peter, truly analyzing what it means to be Spider-Man. Even Peter can’t help but notice SpOck’s accomplishments:  Aunt May can walk again.  Peter is now a doctor. He’s the president of his own company. Even if Peter can’t remember doing any of it.  Peter has to try and figure out how to understand the science that Doc Ock built his company on top of.  (It is fun seeing Peter think on his feet and act like he’s the same person who has been running around in his body for the past few months.) Dan Slott has demonstrated on multiple occasions that he truly understands the essence of who Peter Parker is and why we love him.  Slott understands that Peter is just a goofy silly little kid who happens to have amazing powers. He’s driven by this insane sense of responsibility that compels him to constantly throw his life away in the pursuit of protecting everyone.  I feel like Spider-Man fans forgot that, so Dan Slott brought about the Age of SUPERIOR SPIDER-MAN has our penance.  He took Peter away from us and made us remember why we loved him so much. With every joke and quip in THE AMAZING SPIDER-MAN #1, we are reminded of why we love him so much.  I couldn’t have asked for anything more from this return of Peter Parker.

It’s sort of spectacular how well Slott is able to switch between SpOck and the original Peter. Ramos is perfect at drawing Peter in a way that you can tell it’s really him behind those eyes.  If that makes sense?  It’s an amazing talent when you can express such minor details in your character design.  It’s clear that Slott’s mission with SUPERIOR SPIDER-MAN was to bring Peter to a place where his future was a complete mystery to everyone, including us.  A sort of ‘character reboot.’  Slott brought the character back to a place where we have no idea what’s in store for him and we’re excited again to take that journey.  I couldn’t wait for Peter to regain control of his body and now, I can’t wait for him to regain control of his life. Right now, Peter only seems to care about being alive and not so much on picking up all the pieces of his life.  I understand why someone would want this book to be more monumental, but it wouldn’t feel right if it was. Let’s not forget the bigger mystery that was hinted at the very beginning of the book.  Which is not much of a spoiler because it’s being toted as Spidey’s ORIGINAL SIN.  A second person was bitten by the spider that gave Peter his powers.  A girl.  While Peter followed the path that Uncle Ben’s death put him on, It’ll be interesting to see the choices that someone else took.  Let’s pile a little bit more shit on Peter’s plate, shall we?

SUPERIOR SPIDER-MAN dragged Peter through the mud and it was difficult to watch and I loved every second of it. I’m sad to see that chapter end. Can you pick up this book, if you didn’t read SUPERIOR SPIDER-MAN?  Yes! It’s actually kind of clever.  Peter Parker has no idea what the hell is going on in his life.  Just like a new reader to AMAZING SPIDER-MAN. Peter owns a company?  It’s a surprise to both you and Spider-Man. Every issue is a mystery that both you and Peter get to navigate together.  Spidey fans are pumped and they have every right to be. Peter has so many obstacles ahead of him, which is great because what’s the point of burying Spider-Man alive if we don’t get to watch him crawl through the dirt?