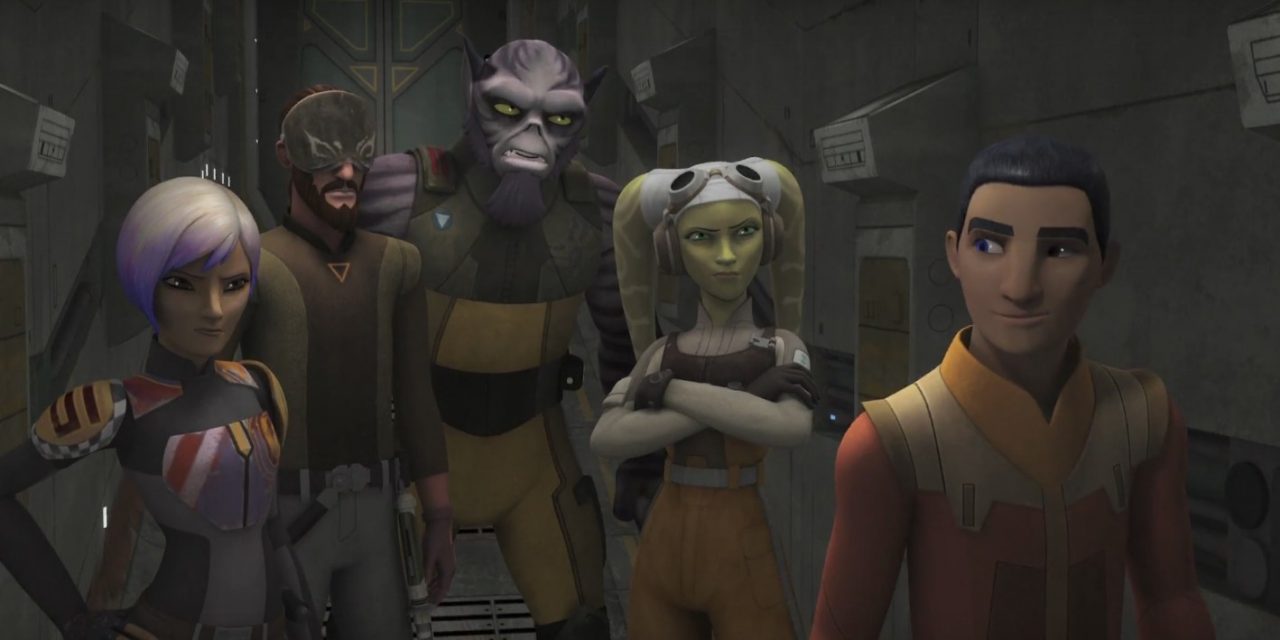 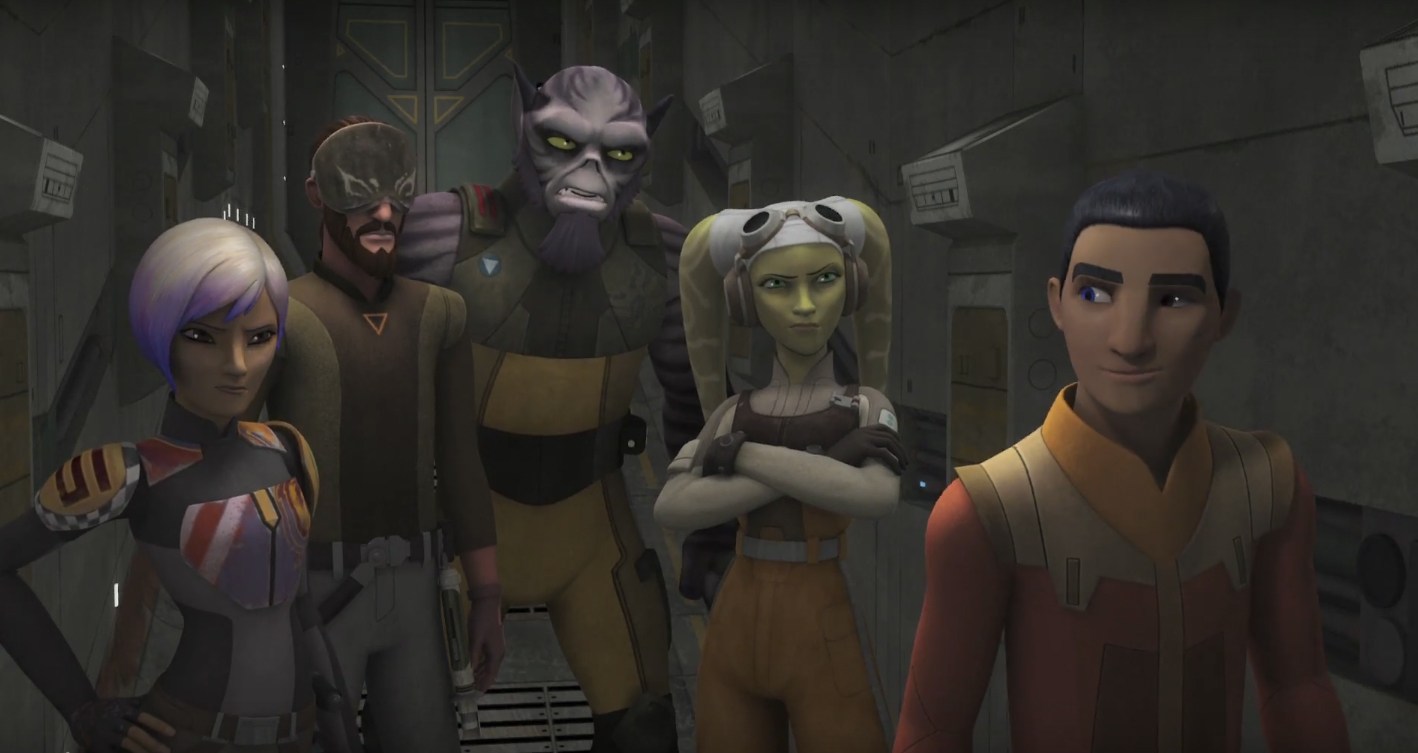 For all those fans of a galaxy far far away who are fiending for another fix, your wait is over as STAR WARS REBELS has returned for a third season.  The first episode takes place an indeterminate amount of time after the season 2 finale, and Ezra Bridger has grown in both stature and power, becoming a much more formidable adversary for the Galactic Empire.  He leads a successful mission to free Hando, a smuggler who the team have had several encounters with, from an imperial prison in exchange for information that can aid the rebellion.  Hando’s info checks out, and Ezra is gung ho to take on the next mission, despite the caution being urged by his superiors who insist on a recon first.  Once Ezra is alone we discover he has been seeking council from the Sith Holocron, and that his ambition and anger are leading him to be tempted by the darkside.  At Hera’s urging, Kanan, who has remained mostly solitary since the events on Malachor, goes to speak with Ezra and discovers the Holocron and confiscates it after scolding Ezra, who thinks he is overreacting.  As Ezra sets off to lead the recon mission, Kanan discovers a strange presence on the planet that just might help him find his way again, which is sorely needed as Ezra might just be too bold for his own good, and the Galactic Empire has some nasty surprises in store for them all.

I don’t think they could’ve come up with a better story to open the new season with, and that is saying something.  Ezra is being tempted by the darkside, Kanan is finding his way in the force, Grand Admiral Thrawn has been introduced and is hunting the rebels, there is a huge question mark left over the fate of Ahsoka Tano, and we learn that the rebellion is finally starting to form up into the organization we are more familiar with from the films.  If anyone was worried that this show was going to become stale, put those fears to rest because things are going in great new directions that are sure to raise the tension and give us a wider view of the Star Wars Universe during the dark times that helped forge the rebels into what they eventually become.  Also, fans of the expanded universe will surely rejoice over Thrawn being reintroduced to canon, and I’m sure they can’t wait to see if he lives up to his badass reputation now that he’s back.

STAR WARS REBELS continues to have solid production values for an animated television show.  The most notable change this time around is the updated appearance of the characters, most notably Sabine and Ezra.  Sabine has new hair color and has repainted the plates on her armor, giving her an updated look that suits her artistic personality, and Ezra has been completely revamped as he is now older, taller, and well on his way to adulthood.  In addition to the great character updates, the show continues to do solid work with the Star Wars Universe, the sound effects are spot on, the ships are everything we want them to be (particularly the Y-Wings bombers featured in the premiere), and the overall pacing keeps the show a perfect addition to the overall franchise.

Rather than focus on the main cast members who’ve I’ve talked about in several previous reviews, I want to talk about the new faces who joined the cast this episode.  Lars Mikkelsen (HOUSE OF CARDS) joins the cast as Grand Admiral Thrawn, and his vocal talents are well suited to the character.  Mikkelsen makes Thrawn sound like a leader, but also the smartest man in the room, giving us a portrayal that is sure to make long time fans of the character happy.  Joining the cast as Governor Arihnda Pryce as well as some other minor characters is veteran voice actor Mary Elizabeth McGlynn (STEVEN UNIVERSE).  McGlynn was involved in one of my all time favorite series, COWBOY BEBOP, and I am thrilled that she is joining the Rebels cast.  Hopefully they’ll find opportunities for her beyond just minor supporting characters because she is amazingly talented.  We got a celebrity voice actor in the premier from a most unexpected place, DOCTOR WHO.  Legendary fourth Doctor Tom Baker lends his voice to The Bendu, the mysterious force sensitive creature who helps set Kanan back on his path.  Baker gives the character the right mix of wisdom and mirth, creating a sage-like creature that will certainly capture some people’s imaginations.

The third season starts off strong in STAR WARS REBELS.  The story is moving in an intriguing and gripping direction, the production values remain high and Universe conscious, and we get some new additions to both the fictional cast and the voice acting cast.  Long time fans of the show are sure to love where things are going, and while new comers may be a little lost, there is more than enough fun here to keep them interested.