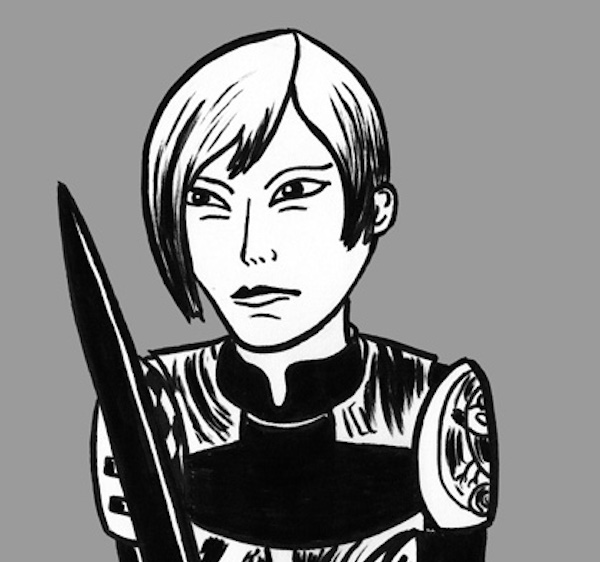 When the Star Wars extended universe was scrapped to make way for THE FORCE AWAKENS, many fans’ only hope for characters they love still being canon became STAR WARS REBELS, and while it is impossible to please every fan, the show certainly tries to build a narrative that bridges the prequels and the original trilogy while re-establishing long loved characters from the expanded universe.  The events at the end of season two set the bar pretty high for this season, and they more than met expectations by taking an unexpected path.  While we see the consequences of Ezra’s actions play out as he continues to grow in the force and struggles to walk the path of a Jedi, they are overshadowed by the continuing formation of The Rebel Alliance, which takes center stage as it shapes the lives of the various crew members of the Ghost.  Of course, the imperials are far from idle as they bring in Grand Admiral Thrawn to try and eliminate the rebellion before it can grow into a larger threat; and Maul still intends to use Ezra in his quest for vengeance.

The fact that REBELS takes place between the first and second Star Wars trilogies is both a blessing and a curse, and it has a significant impact on the storytelling.  The positive side of this placement is that it allows the show to explore known areas of the Star Wars universe that aren’t focused on in the trilogies but that are still fan favorites, such as what was going on on Mandalore at this time, which is one of the more fun story arcs this season.  Additionally, it allows them to tie in to known events, places, and characters and flesh out their history, such as Dantooine being used as the original alliance base, some of the events on Tatooine that precede A New Hope, and getting to see the back stories of minor supporting characters from the original trilogy.  The downside of being sandwiched is that there is a definite limit to what can be told, as the main characters in the show do not appear anywhere in the rebellion during the original films. This predicament starts to become more frustrating the longer the show progresses, because the more you care for these characters, the more you want them to succeed or want them to do something epic on the level of the larger events depicted in the film, and while they have certainly doled out some seriously cool moments this season, it still feels short of what you hope for the crew of the Ghost.

STAR WARS REBELS has always had solid production values and done a great deal to appear completely Star Wars, but after two seasons of establishing their credibility they finally take some chances and have more fun in season three, and it pays off.  We get to see a wider variety of imperial equipment and characters, and while some of them are frighteningly serious, they run the gamut of competence and allow us to see a more human side of the Imperial military while also discovering more about it.  Additionally we get to see a wider variety of vehicles and armaments on both sides, some familiar and some less so, which is always fun and tugs at our nostalgic fanboy heart strings.  One of the coolest things they’ve done with the ships is focus more on what kind of weapons they have, which allows less die hard fans to become more knowledgeable about what the various styles of star fighters are ideal for without having to research them.  I was particularly surprised when there was droid banter that played off the song “Anything You Can Do” from Annie Get Your Gun, such a strange reference but somehow appropriate for the moment and quite fun.

As much as I love the main cast, I have gushed about them plenty in previous reviews, so I am going to take some time to focus on some of the outstanding supporting characters and noteworthy special guests that graced the show this season.  David Oyelowo (JACK REACHER) continues to lend his voice to Agent Kallus, and this season he really comes into his own.  Kallus has one of the more interesting story arcs on the show and it was impressive to see Oyelowo seamlessly transition Kallus from a cold, hard military man to a true believer with a compassionate streak.  Joining the cast this season as the voice of Grand Admiral Thrawn was Lars Mikkelsen (HOUSE OF CARDS) and he is deliciously menacing as the uncompromising Imperial.  Mikkelsen gives Thrawn a reserved voice that radiates with power and authority, which allows him to own scene after scene and gives us a villain that we love to hate.  Veteran voice actor Sam Witwer (TV’s ONCE UPON A TIME) once again lends his voice to Maul, and it is one of the most impressive performances of the season.  Maul is a master manipulator who has also hit a level of desperation as he has witnessed his dreams vanish and is left with only base vengeance on his mind, as such Witwer runs the gamut of emotions with this vocal role but does so masterfully and even manages to make us sympathize with him, which is a major feat considering many of his horrific actions.  Fans everywhere will be happy to welcome James Arnold Taylor (STAR WARS: THE CLONE WARS) back to the Star Wars Universe as he voices Obi-wan Kenobi once again.  Taylor has voiced Kenobi for so long that his is one of the most recognizable voices in Star Wars animated projects, but he still does a great job with the character and manages to make him sound like an older and wiser version of the character, which he certainly is this season.  Perhaps the biggest surprise this season was Forest Whitaker (ROGUE ONE) deciding to voice the animated version of his Rogue One character Saw Gerrera.  Whitaker is a fantastic talent who has no trouble bringing Gerrera’s gruff, hard edged personality to life, even as an animated character, and it was fun to learn more about him.

STAR WARS REBELS remains a quality show with a great story, despite the fact that it clearly has a time limit that it is fast approaching.  Star Wars fans will easily find things to love this season as it keeps incorporating more characters from the expanded universe while fleshing out the origins of the Rebel Alliance and giving us closure on some long loved characters.  If you haven’t watched this show yet and you are even the slightest fan of the overall franchise than you owe it to yourself to start binging at your earliest convenience.