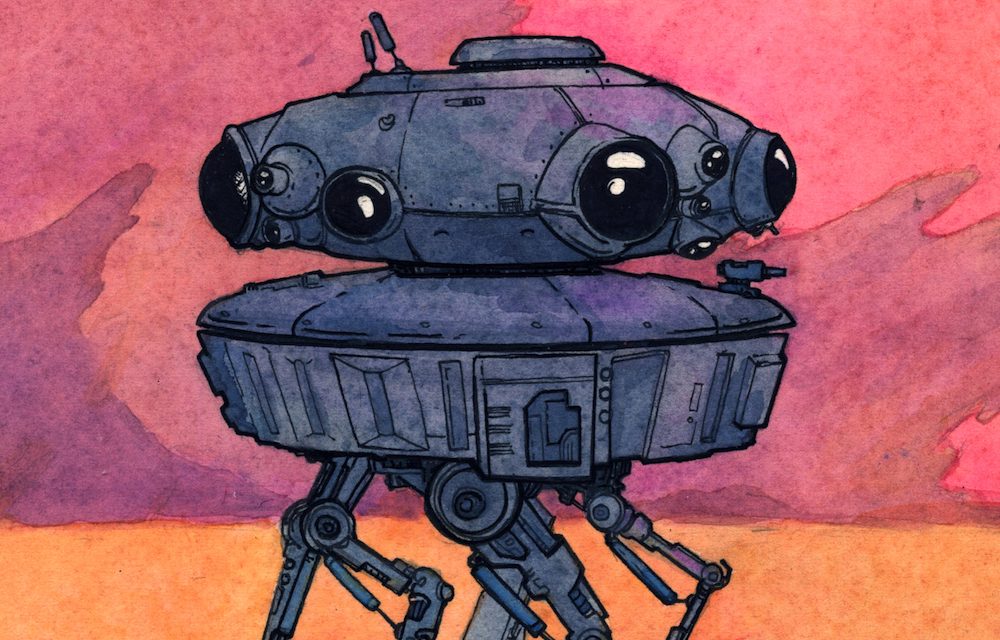 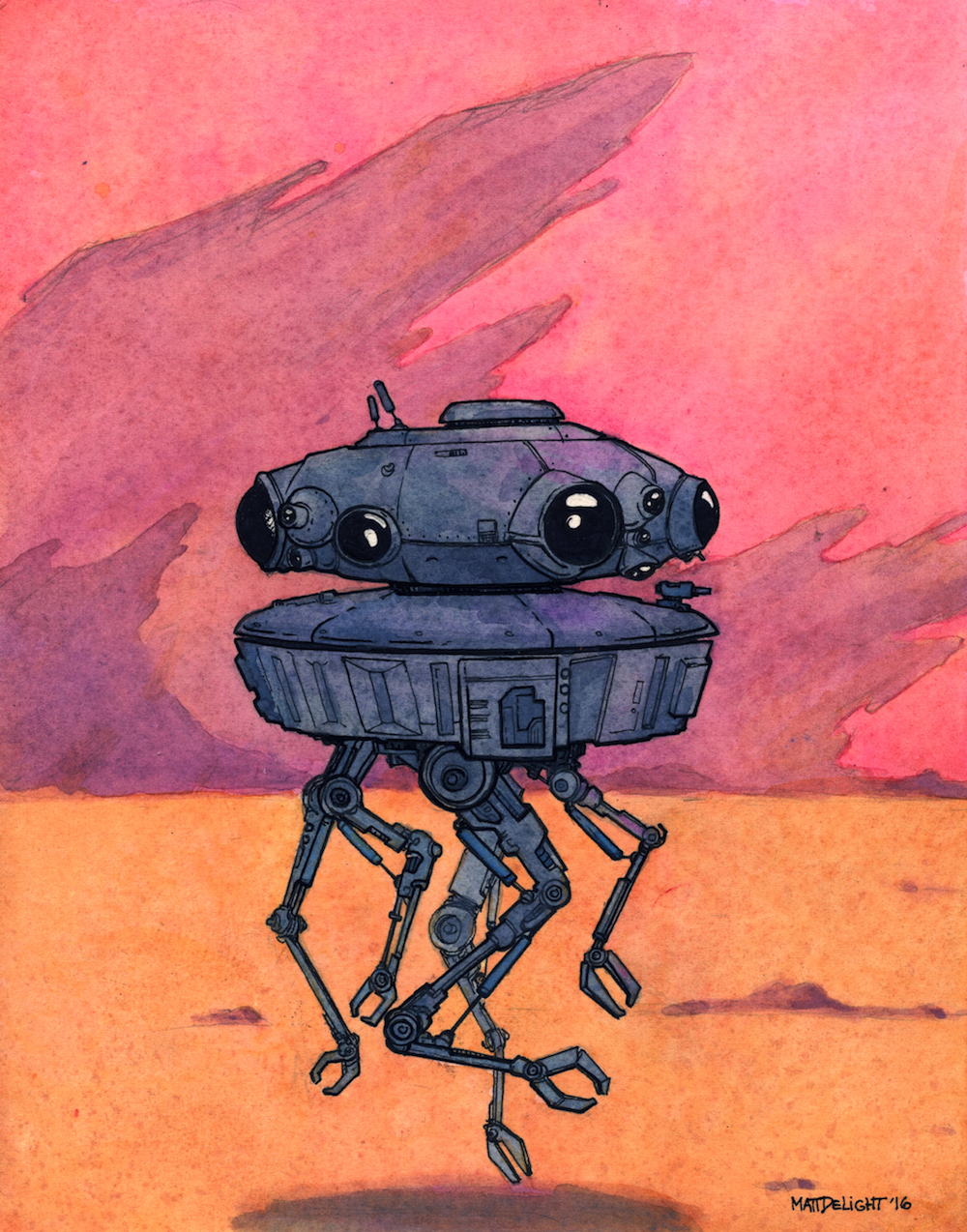 While STAR WARS: THE FORCE AWAKENS moves forward from the original trilogy, the second season of STAR WARS REBELS continues to give us a look into the dark times that separate the prequels from the original trilogy.  Ezra and the crew of the Ghost are now neck deep in the Rebellion, no longer operating as a cell, they have joined a larger force and are going out on direct missions rather than merely harassing the Empire.  This broader role puts some strains on the crew, as Ezra is forced to learn not only how to be a Jedi, but also how to be a soldier, Kanan is struggling with trusting new allies who bring up tumultuous feelings from his past, and Hera is dealing with the burden of being leader in a more formal role.  As the season progresses the crew must learn how to come together in their new circumstances if they are to succeed against the ever increasing power of the Empire, who is using everything from inquisitors to experimental weapons to try and destroy the fledgling Rebellion.  Eventually, the rising power of Kanan and Ezra makes them a primary target of the inquisitioners, and they must travel far and wide in search of secret knowledge to aid them in their struggle.

Star Wars Rebels continues to knock it out of the park with its fantastic story.  While fans would surely be pleased with just seeing more of the origins of the Rebel Alliance, REBELS treats them to something far more rewarding by bringing in characters from both Star Wars: The Clone Wars and the original trilogy, as well as revealing some interesting backstory to some of the technology and ships used in the original films.  As if that wasn’t enough, all that is used as a backdrop to further develop the character and stories of the crew of the Ghost, giving us a show that feels every bit as Star Wars as the films.  I particularly liked the way the dynamic between Ezra and Kanan has evolved throughout this season.  As Ezra is finding his way, he is often tempted by the simplicity of his old life, while at the same time Kanan is having to deal with issues from his past while trying to remain an upstanding Jedi role model and master to Ezra, these complimenting stories blend together and drive much of the drama of the season until they finally unite as they learn what it truly means to be a master and an apprentice jedi.  Also, I quite enjoy that the show gives all the Ghost crew members their own episodes, this season sees each of the members, even chopper, get at least one, and they are some of the more fun episodes in season two.  When you roll all this together, the end result is a show that has real depth and, despite the comedy relief, is constantly becoming deeper and more intense as it progresses, giving fans of all ages a story that will keep them glued to the screen.

One of the continuing highlights of STAR WARS REBELS are the high production values.  I’ve mentioned in my previous reviews that Disney has really made a point to make sure that the audio effects are classic Star Wars and that continues this season.  Whether it is lightsabers clashing, blasters firing, light speed engaging, or Vader breathing, all the sounds are perfect and help keep you immersed in the Star Wars Universe.  As the scope of the show expanded this year, so did the variety of spaceships and vehicles that pop up and, much like the audio production, they do an excellent job of keeping them show appropriate.  It goes without saying that an animated show won’t have quite the level of detail that one of the big budget films will have, however, the ships are all clearly identifiable and pretty great looking.  I was impressed with the introduction of the B-wing this season, as well as the heightened presence of Star Destroyers, Imperial Shuttles, and Corellian Cruisers as they enhanced the classic feel of the show and added a deeper level of familiarity.  In addition to the audio and visual aesthetics, the show has solid directing.  The action is easy to follow and the framing and editing do an outstanding job of conveying the story and character dynamics, which is quite impressive for an animated series geared towards younger audiences.

The more I review an ongoing animated series, the harder I find it to talk about the voice acting; not because it is deficient in any way, but because there is only so much gushing I can do before I feel I am being overly repetitive.  So rather than go on and on about the principles, who continue to do an amazing job, I will merely focus on a few of the supporting voice actors this time around.  Dee Bradley Baker (TV’s AMERICAN DAD) reprises his role as Captain Rex from The Clone Wars and also provides the voices for several other characters including Admiral Kassius Konstantine and Ephraim Bridger.  Baker has excellent command of his voice, regardless of the character he is playing, and he effortlessly delivers a wide array of emotions perfectly, allowing us to empathize and form attachments to his characters.  Lending his voice to Commander Sato is Keone Young (TV’s SONS OF ANARCHY)  Young first entered my radar when I saw him on DEADWOOD, and he has been a pleasant surprise time and time again as he pops up in other shows and movies I like.  Young has mastered a wide range of accents, and I would have had no idea he was the voice of Sato if I hadn’t seen him in the credits, which is extremely impressive.  While Sato doesn’t have a great deal of screen time usually, Young puts real emotion and command into his voice, giving us a believable no nonsense leader.  Lastly, Ashley Eckstein (STAR WARS: THE CLONE WARS) has shown up sporadically as Anakin’s former padawan Ahsoka Tano.  Eckstein has given a maturity to the voice as the character is now older, but more than that you can feel the emotions behind her words when she speaks, creating a deep, nuanced character that is sure to remain a fan favorite.

With the second season of STAR WARS REBELS the show took a turn into a wider swath of the Star Wars Universe, giving fans even more of what they loved in the first season, but expanding to include more characters from The Clone Wars while tying events ever closer to the happenings in the original trilogy.  It continues to boast great stories, impressive production values, and excellent voice acting, giving fans nearly everything they could hope for from a Star Wars television show.  If your Star Wars fandom even remotely extends beyond the films, then you should definitely give this show a watch, because it is every bit as fun as everything else in that wonderful galaxy far far away.