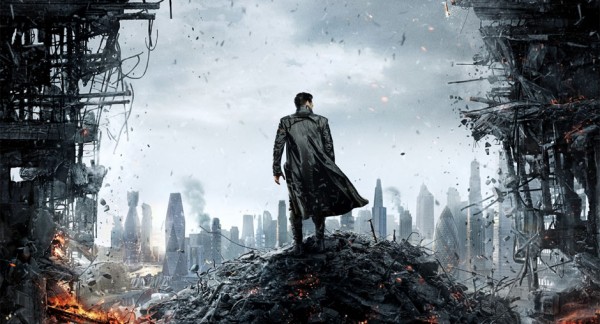 The voyages of the Starship Enterprise return to the big screen on May 17, 2013 with the release of STAR TREK INTO DARKNESS, the second installment in the recently rebooted TREK franchise from Director J.J. Abrams (LOST, SUPER 8).  But fans will have plenty to drool and speculate over with the release of a brand-new teaser trailer for the film.  The official synopsis of the film follows:

In Summer 2013, pioneering director J.J. Abrams will deliver an explosive action thriller that takes Star Trek Into Darkness. When the crew of the Enterprise is called back home, they find an unstoppable force of terror from within their own organization has detonated the fleet and everything it stands for, leaving our world in a state of crisis. With a personal score to settle, Captain Kirk leads a manhunt to a war-zone world to capture a one man weapon of mass destruction. As our heroes are propelled into an epic chess game of life and death, love will be challenged, friendships will be torn apart, and sacrifices must be made for the only family Kirk has left: his crew.

They aren’t kidding about this being “an explosive action thriller.”  The trailer is only a minute-and-some-change long, but it is brimming with volcanic eruptions, vicious hand-to-hand combat, visceral starship explosions, laser gun battles, a battered and bruised-looking crew and what looks to be the Enterprise crashing into the San Francisco Bay area.  All the while Benedict Cumberbatch’s (SHERLOCK, TINKER TAILOR SOLDIER SPY) as-of-now unnamed villain, who surprisingly sounds a lot like Captain Picard from STAR TREK: THE NEXT GENERATION, delivers an unsettling warning no doubt meant for our main hero Captain James T. Kirk played by Chris Pine (STAR TREK, THIS MEANS WAR).  Speculation about the identity of Cumberbatch’s nefarious character has been raging since announcement of his involvement.  Is he a new interpretation of all-time favorite TREK baddie Khan Noonien Singh?  Is he an alternate timeline version of Kirk’s friend-turned-enemy Gary Mitchell and could those shots of Alice Eve (MEN IN BLACK 3) in the teaser indicate she may be Dr. Elizabeth Dehner?  Is Cumberbatch just a Red Shirt who has had enough of Star Fleet’s blatant abuse of expendable crew members?  Let the theorizing commence!

Another interesting thing to notice is that the Japanese version of the trailer contains a couple of extra seconds of footage towards the end that may evoke memories of another beloved TREK film and possibly provides a clue as to what takes place in this story.  See for yourself:

A 9-minute preview featuring more footage from the film will be playing before select IMAX screenings of THE HOBBIT: AN UNEXPECTED JOURNEY in just under a week (December 14th).  STAR TREK INTO DARKNESS energizes into theaters May 17, 2013.