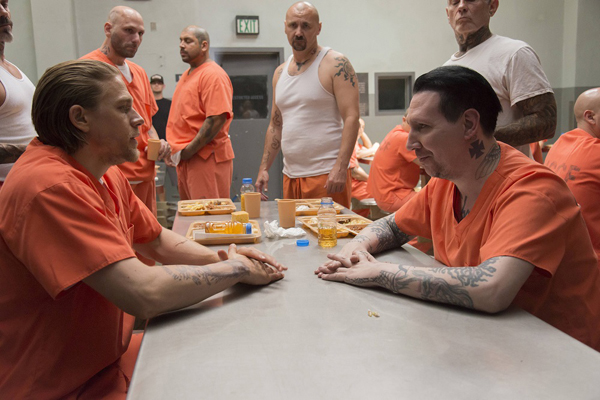 With the cancellation of BOARDWALK EMPIRE, TRUE BLOOD, and SONS OF ANARCHY, it seems that violent TV dramas are becoming an endangered species, but the SONS OF ANARCHY season premier certainly shows that they plan to go out with the same kind of blood and insanity that the show is known for. The death of Tara at the end of last season has, unsurprisingly, had a profound effect on Jax. He is no longer looking to take the high road, but rather wants to secure Samcro’s power and get revenge for the death of his wife. The rest of the club is, of course, sympathetic and on board for whatever dark road he plans to lead them down. Gemma, Jax’s mother and Tara’s murderer, is having to scramble to keep her head above water as she is busy hiding disgraced club member Juice, inventing a scapegoat for Tara’s murder, and dealing with Wendy, who checked herself out of rehab once she heard about Tara. Former police chief Uncer gets himself an interesting proposal from District Attorney Paterson, but he’s busy with problems of his own as his old cop skills get him into trouble.

I was surprised by how much I liked the plot of “Black Widower,” the premier episode of SOA seventh season. I was really disappointed by how season six ended, and I honestly didn’t have very high expectations going in, but even so, I was impressed with the direction Kurt Sutter, the series creator and architect, took the show. While I was originally hoping that last season would take the show to new, unexplored horizons, with only a single season remaining it makes sense to keep things to the same playground, which they did while still managing to take things in a new direction, just one I wasn’t expecting. Rather than have Jax go to jail and have the MC go legitimate, they flipped the script and now have Jax leading the club deeper into crime and bloodshed as he is out for revenge and to make sure that that which is his stays strong and protected. Based on the opening episode, I’m actually pretty excited to see where things are going to go, and that hasn’t been the case with this show for quite some time. However, and this is just a matter of personal taste, I will be extremely pissed off if Gemma isn’t a cold corpse by the end of the series, because I have grown very tired of the character and just want her gone.

SONS OF ANARCHY has such a sizeable cast that it is often hard to discuss everyone on the show, yes, Charlie Hunnam (PACIFIC RIM) is great as Jax and Katey Sagal (FUTURAMA) is perfectly detestable as Gemma, but since this is merely an episode review I’d rather focus on less prominent characters and guest actors rather than gush over the headliners again. Drea de Matteo (FREE RIDE) has had an increased presence on the show in her role as Wendy, and I really liked her performance in this episode. She brings a mature determination to Wendy that was somewhat lacking in previous portrayals and easily handles the evolution of the character. Theo Rossi (METH HEAD) continues to deliver one of the most impressive performances on the show in the role of Juice. Juice is an extremely complex character because he seems to be a good guy deep down, but has done some horrible things due to unfortunate circumstances, Rossi does an excellent job of bringing that harsh inner conflict to light and often steals the spotlight from the show’s more prominent actors. I’ve always liked Kenneth Choi (THE WOLF OF WALL STREET) in the roll of Henry Li, one of the leaders of the Chinese mob, and the way he handles his expanding role in this episode clearly demonstrates that he has the talent to be a center stage antagonist on the show. I was very impressed and surprised by Marilyn Manson’s (WRONG COPS) debut performance on the show. He steps into the role of Ron Tully, a high ranking member of the Aryan Brotherhood who Jax does a favor for in order to patch up strained relations between the group. Manson delivers an impressive performance, infusing Tully with the right amount of intimidation and arrogance, but also humanizing him with a bit of humor. While he didn’t have much screen time, I was impressed that he could deliver such a nuanced performance and hope he pops back up at some point this season.

While I may not have liked how the last season ended, SONS OF ANARCHY opened their final season with a powerful episode that is bound to set the tone for the remainder of their ride. The story was great, taking things in a direction that is simultaneously new and familiar, and the acting was top notch, with some lesser seen faces making a splash. I hope this is a sign of great things to come as this series comes to a close.