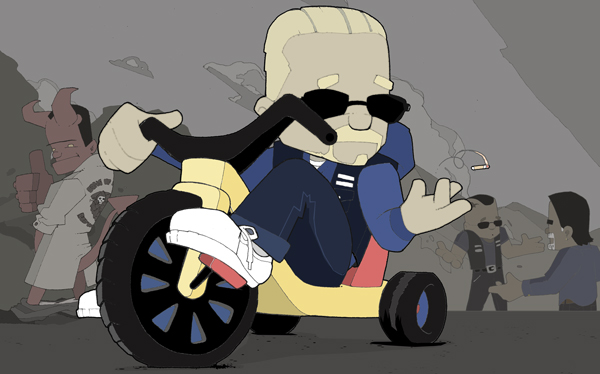 Major spoilers ahead! Do not read unless you have seen all of Season 6!!

Looking back on the sixth season of SONS OF ANARCHY, its safe to say that it was full of major shake ups: a school shooting, impactful deaths, the destruction of the club house, internal intrigue, and new players of both a criminal and legal nature all contributed to the roller coaster ride that was this season. However, as is typical with SONS OF ANARCHY, you never really know how everything is going to play out until the season finale, and this year it fell vastly short of the high expectations fans have for the show.

As there are way too many happenings to do a recap, I’m going to operate under the assumption that readers have seen the show. I really liked how they resolved the issues with the IRA and finally killed of Clay Morrow. This storyline had grown stale and by wrapping it up it paves the way for some much needed new territory, specifically the all but inevitable turf war brewing in Oakland. The Lee Toric story line was kept relatively short, and it was well crafted with the nice result of killing off Otto, another character who had run his course, and, along with the school shooting sub plot, was instrumental in setting up Tyne Patterson as a fierce legal opponent of the Sons. Bobby’s return to the fold was another high point, as it brought back some much needed stability to Redwood Original. Newer players Nero Padilla, Charles Barosky, and Colette added some interesting twists to both personal and professional story arcs, and while I don’t think they were utilized to their full potential this season, I believe they will be far more interesting next season.

The two biggest disappointments this season were the Juice story line and the Jax, Tara, and Gemma debacle. Juice’s story started out great and was pretty interesting as a background piece for most of the season, but I’ve always thought he was one of the more interesting characters on the show and I think putting him back on Jax’s bad side and him helping Gemma in the finale was a terrible move that I don’t like the direction it takes things. Similarly, I really liked how the Jax, Tara, and Gemma storyline played out for most of the season, but I feel the finale ruined everything. I felt Jax going to jail and Tara free with the kids was a great idea and would have taken the show to new and interesting places. Instead, they killed off Tara, who was becoming more interesting every episode, and we get stuck with more of Gemma, who has become such a broken record she is just boring. On top of that, it keeps options open for Wendy, who never should have been brought back to the show after being written off the first time. The way these two storylines were wrapped up in the season finale forces the show to keep treading the same ground, which has become more and more stale the last two seasons and seriously makes me question whether this show will even be worth watching anymore.

The productions values for the show live up to the usual standard. It has decent directing and nice camera work (particularly with the actions sequences), but the real highlights are the settings and costumes. Being a show about an outlaw biker gang, you expect to see seedy locations, but rather than limit it to only those kinds of locales it mixes in a fair amount of rural, industrial, and nicer urban settings to keep things interesting. The costumes are particularly well done, with bikers, gangsters, lawyers, law officers, white collar criminals, and cartel members looking like they strolled out of actual news coverage and onto the show. This combination of great locations and costumes really helps elevate the tone of the show.

SONS OF ANARCHY boasts an overly large cast, and while almost everyone does a wonderful job, I’m only going to focus on the performances that I found particularly noteworthy. Charlie Hunnam (PACIFIC RIM) and Maggie Siff (PUSH) have great chemistry as Jax and Tara, even though they don’t always share a great deal of screen time. Both characters’ struggles are heavily influenced by the actions and personality of the other, and both of them do a great job of portraying the weight and consequences of those burdens. While I have grown very tired of Gemma, Katey Sagal (TV’s FUTURAMA) still does an excellent job portraying the character, easily bringing her cold, venom pumping heart to the masses. Dayton Callie (THE DEVIL’S CARNIVAL) continues to be wonderful as the heart warming Wayne Unser. His portrayal of this retired law officer hopelessly entrenched in the lives of the Sons has never been less than perfect, and he is definitely one of the reasons to watch the show. Jimmy Smits (TV’s OUTLAW) returns as Nero and he proves to be one of the smartest additions to the show. He is spot on as this OG trying to stay out of the life while constantly being pulled back in. It was interesting to see Ron Perlman (PACIFIC RIM) play a more subdued and reserved version of Clay, and while it was time for the character to go, Perlman delivered his usual great quality of work to the very end. CCH Pounder (THE MORTAL INSTRUMENTS: CITY OF BONES) has proved to be an excellent addition to the cast. She brings a confidence and power to District Attorney Patterson that is perfect for the Sons’ legal foil. Lastly, I want to mention Donal Logue (TV’s COPPER) who did a great job as Lee Toric. He played this corrupt, vengeful, out of his mind former law officer with absolute perfection, giving us some of the best moments of the season.

The sixth season of SONS OF ANARCHY opened with great potential: a dramatic school shooting, new players, internal intrigue, and an interesting take on good and evil, and while there were certainly some interesting, and even crazy, happenings this season, when all is said and done the show just treads the same ground as before and leaves a stale taste in the mouth of the audience. I’ll probably tune in to the season premier next year, but they better knock my socks off if they want me to keep coming back.