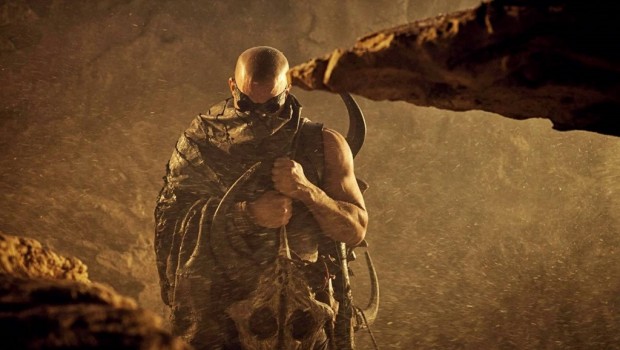 Back in 2000, director David Twohy (THE ARRIVAL) and relative unknown Vin Diesel (FAST & FURIOUS 6) rocked our collective asses with a little sci-fi film titled PITCH BLACK. I was immediately made a fan. I consider PITCH BLACK one of my favorite sci-fi films of all time because it did everything it aimed to do so right and was a total blast. It had great atmosphere, awesome creature designs, interesting characters that were full of surprises, and some seriously bad ass action sequences. Then in 2004, Twohy and Diesel gave us a sequel in the form of THE CHRONICLES OF RIDDICK which was also fun, but lacked the originality of the first and instead aimed to be a summer blockbuster smash! Don’t get me wrong, THE CHRONICLES OF RIDDICK was great, it just didn’t capture anything that made the original so good besides the title character. Fast forward 9 years (yowsa!!) and it looks like fans of both original films have something to be excited about in the form of the third installment once again directed by Twohy and starring Diesel simply titled RIDDICK. Take a look.

Now that’s what I’m talking about! This looks so great. I think the creators really listened to fans on this one as RIDDICK looks like a true sequel to PITCH BLACK rather than THE CHRONICLES OF RIDDICK. Like I said before I love both films, but it’s nice to see this series return to its roots.