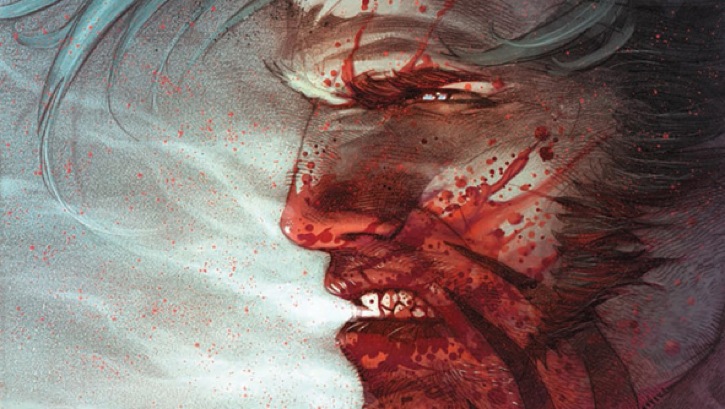 One would not expect a trip into the past of one of the most violent characters in the Marvel Universe to be sunshine and roses, so it’s not a surprise that ORIGIN II, the second mini series about Wolverine’s origin, is awash in blood and pain. The story opens with Logan living with a pack of wild wolves, but that world comes crashing down when a polar bear, released into the area by Essex, murders his pack. Logan is quick to avenge their deaths, but the loss of yet another family takes a heavy toll on him. Tales of the wild man who killed a polar bear start to spread, and Essex attempts to track and capture him, but another group of trackers, led by Hugo, Creed, and Clara, find him first. Clara pleads for Logan to be treated gently, but Hugo sees him as a money making machine and makes him the main attraction in his circus. While Clara continues to try to reach through to Logan’s humanity, much to the annoyance and jealousy of Creed, Essex is also undeterred by his failure and continues to try and lay hands on Logan, which he eventually does by promising Hugo a boat load of money to experiment on his star attraction. Essex betrays and murders Hugo and, after a lengthy dissection, decides to make Logan into one of his mindless soldiers, thankfully, Clara and Creed come to the rescue. The trio escape and are successful at evading Essex for awhile, but eventually Creed’s jealousy becomes too much to bear and he betrays Logan to Essex. In the struggle to capture Logan, Clara is killed, after which Creed arrives and talks Logan into killing Essex with him. The duo assault Essex’s manor, with Logan eventually learning the truth about Creed before killing Essex, however, before he can finish his confrontation with Creed, Clara steps in and reveals that she is alive and heals quickly, just like Logan. The ensuing confrontation leads Logan to snap and kill Creed, because he feels he deserves to die for the horrible things he’s done. To no one’s surprise but Logan’s, these actions alienate Clara and he is forced to go back to wandering the wilderness alone.

Writing duties on ORIGIN II were handled by Kieron Gillen, and while it is very well written and had an engrossing story that sheds more light on Wolverine’s background, it wasn’t anywhere near as shocking or impressive as the first one because, by and large, it’s the kind of stuff we’ve seen Wolverine do before. Living in the wild, being treated like an animal, out for revenge, losing control and killing people he shouldn’t, this is all old hat for Wolverine. The real treat story wise is getting a glimpse of the early days of Nathaniel Essex, AKA Mr. Sinister, as well as the revelations about the Creed family and how it relates to Victor Creed, AKA Sabertooth, if you are a fan of either character, then this is definitely a mini-series that you’ll want to sink your teeth into. I certainly enjoyed the story, and think it is a nice addition to Logan’s back-story, but with a title like Origin II I was hoping for something more original and ground breaking, and I was disappointed I didn’t get it.

What I was most impressed by was the art of ORIGIN II. As I mentioned in my issue one review, Adam Kubert brings a style that is both gritty and beautiful to this book, but what really entranced me as the series continued was Kubert’s take on, and stylization of, iconic styles from the late 19th and early 20th century. From the simple outfits of trackers to the outlandish aristocratic style of Essex, form ordinary taverns to outlandish mansions, from the rugged winter wilderness to bustling circus, everything is handled with a beautiful stylization that shuns over realistic portrayals in favor of rougher images that give the imagination just enough fuel to run with, allowing the reader to really engage with the work. I found it very easy to get lost in this world, which is very rare for me in the comic medium at all, but which is even rarer with this kind of looser art style as I usual tend to be turned off by less accurate artistic representations in comics.

ORIGIN II probably isn’t the sequel fans were hoping for, but it does have some things going for it. Gillen and Kubert make an excellent team and create a story and an environment that is easy to get sucked into, we get to see some cool new back stories surrounding two of the mutant world’s biggest foes, and we get to see Wolverine do more of what he does best which, while not original, is often quite fun.