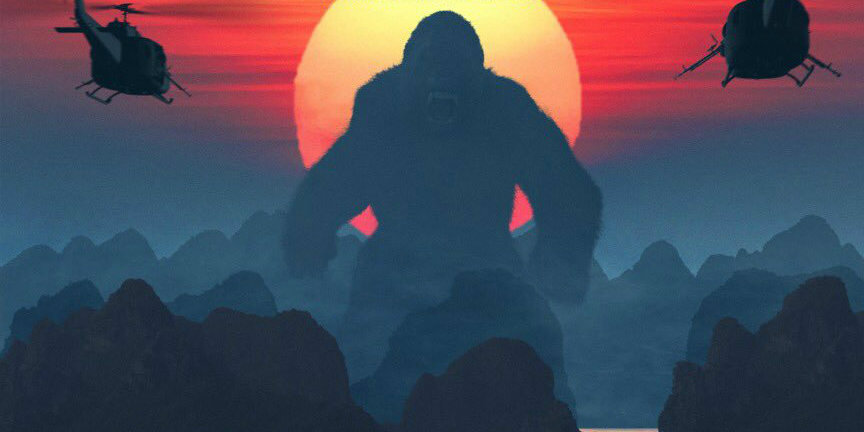 If you were’t excited for the new King Kong reboot KONG: SKULL ISLAND before today, you sure as hell will be after watching the above trailer. We got our first look back as Comic Con this year and everything looked fine and dandy, but now after seeing this, I’m convinced this is going to be something special.

Director Jordan Vogt-Roberts is joined by as astoundingly talented cast including the likes of Samuel L. Jackson, Tom Hiddleston, Brie Larson, John Goodman, and John C. Reilly. Phew, that’s quite the list, but Kong himself is the main attraction of course.

This time around Kong is absurdly gigantic when compared to the lovable brute we saw in Peter Jackson’s version. Make him look like just a pip. Methinks it’s because Kong and a certain green scaled monster may be doing battle on the big screen in the near future. Can you imagine this version of Kong fighting the new Godzilla on the big screen. Epic.

Besides the great cast and cool looking Kong, this film seems to be bustling with all kinds of dangerous creatures all inhabiting Skull Island making it look like an extremely dangerous place to vacation. Kong, all those crazy creatures, the cast, and the absolutely insane looking action sequences have put KONG: SKULL ISLAND near the top of my must-see list in 2017. Ok, I’m done gushing. I just don’t see a lot to complain about here.