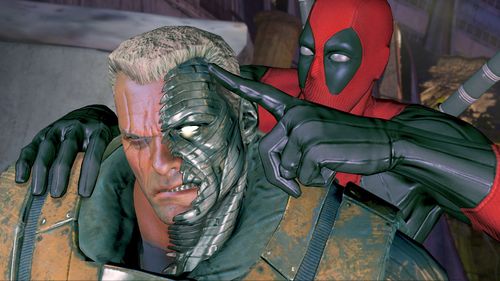 For those of you out of the loop, there is a third-person action adventure style video game being made starring Deadpool who is one of Marvels most beloved and inappropriate characters. His habit of breaking the forth wall, joking his way through murderous adventures, and overall badassness has secured him as one of the coolest comic book characters around. Sounds like it’s about time he got his own video game if you ask me.

DEADPOOL: THE GAME is being developed by High Moon Studios (TRANSFORMERS: WAR FOR CYBERTRON) and is due to be published by Activision for a summer 2013 release. No official date has been set yet, but after watching the latest trailer, I’d say we are getting pretty damn close. While the overall storyline (if it even matters!) is still a bit vague, fans can rest easy knowing that the former Deadpool writer Daniel Way has penned the script. Should be interesting. Let’s check out the newest trailer (that even includes some great gameplay footage) and see what this bad boy has to offer.

Ok, so while this game has been on my nerd radar for quite some time, it just bumped up near the top knowing that Cable will be included in the narrative. His relationship in the comics with Deadpool has always been one of my favorite things and seeing him in full 3D glory in this trailer made me a very happy fan. Besides that, everything here appears to be solid and classic Deadpool. Super violence? Check. Braking of the fourth wall? Check. Perfectly horrible jokes and quotes? Check. And bad ass action mayhem? Check. The gameplay looks fun, the characters look colorful, and High Moon Studios seems to have a great grasp on what makes this character fun. Yup, things are looking pretty grand for DEADPOOL: THE GAME and my level of anxiousness will rise until its inevitable summer 2013 release date.

DEADPOOL: THE GAME blasts into your living room summer 2013 and will be available for the X-Box 360 and Playstation 3 home consoles.

In the San Francisco area looking for your next DEADPOOL comic book fix? If so, Check out MISSION: COMICS & ART. They’ve got you covered!