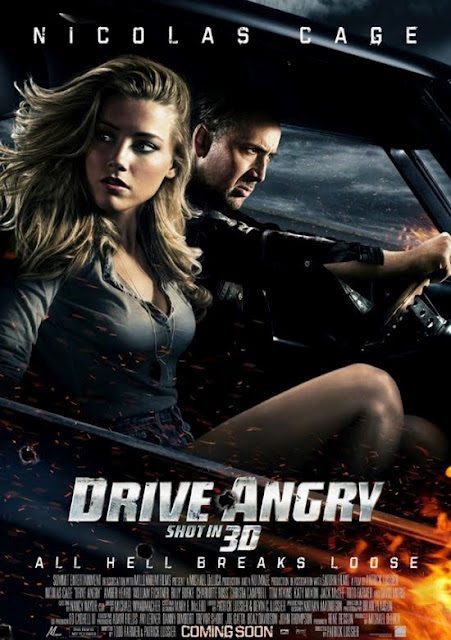 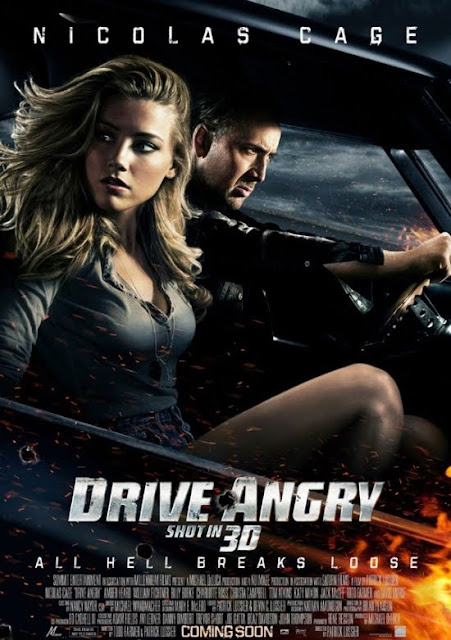 Thanks to Yahoo Movies we get the bad ass trailer for the upcoming 3D movie DRIVE ANGRY starring Nicolas Cage (RAISING ARIZONA, KICK-ASS) and directed by Patrick Lussier (MY BLOODY VALENTINE, DRACULA 2000).

While I loathe the 3D trend that is polluting films today, this movie could be an exception. Why you ask? Well because this movie was actually shot in full 3D (like AVATAR) rather than most movies that tack it on in post production (like THE LAST AIRBENDER) creating a craptacular crap fest that burns my eyes and makes me want to vomit up all the bile in my system along with the 18 bucks I confusingly wasted. I also got a chance to see this film in action AND in 3D at this years San Diego Comicon. The event was presented by Cage himself and what I saw was fun, action-packed, and the 3D was actually most impressive. Creating a hard R rated film in full 3D is a bold move and could be the thing to get older audiences into 3D experiences. All that said, I am actually excited to see this one and will actually fork over the cash to see it in theatres.

The film stars Cage as a revenge-obsessed father who is tracking down all the men responsible for killing his daughter. He drives a bad ass car and has some major firepower up his sleeve to get the job done right. The film co-stars actor William Fichtner (PRISON BREAK, BLACK HAWK DOWN) who I am a huge fan of and am glad to see in a larger co-starring role as the devil’s right hand man. I am aware of all you “Cage-Haters” out there that will just be delighted to poke fun at this movie and somehow feel better about yourself, but lets not forget all the amazing movies Cage has been in such as LEAVING LAS VEGAS, RAISING ARIZONA, MATCHSTICK MEN, ADAPTATION, THE WEATHER MAN, THE BAD LIEUTENANT, and the recent KICK-ASS just to name a few. Cage is always at his best as an eccentric with either a lot or nothing to lose and that is exactly what we get here. The B-Movie vibe and all around action in this trailer looks to be a fun ride. As long as you can remember that Cage’s kookiness in this film and the over-the-top action is intentional you should have some good fun with this one.