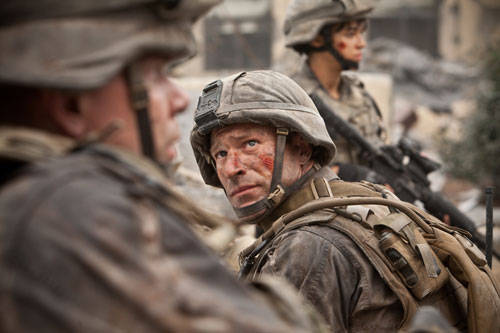 This trailer is a breath of fresh air. There is no corny voice over guy, a cool atmospheric music track, and very subtle sound effects in the background during action sequences. What we have here is a visual trailer that seems more like a teaser since we don’t really get any plot points other than what we can assume. Basically, a bad ass alien invasion in Los Angles and it does not look like the friendly E.T. type. Without spoiling too much I will let you see the trailer below and decide for yourself.

I have to admit that I am a sucker for both alien invasion movies and action movies so this one has me very excited. Also, I was able to check out some scenes from the movie at this years San Diego Comicon and it was a blast. Hopefully I will be able to put this film in my collection one day right next to WAR OF THE WORLDS, SIGNS, and DISTRICT 9. BATTLE: LOS ANGELES has officially been placed on my radar for awesome 2011 films. You can check out the trailer on the big screen this weekend if you go see SKYLINE, another alien invasion film that I will likely review in the near future.