LOOPER Gets a Full-Length Trailer 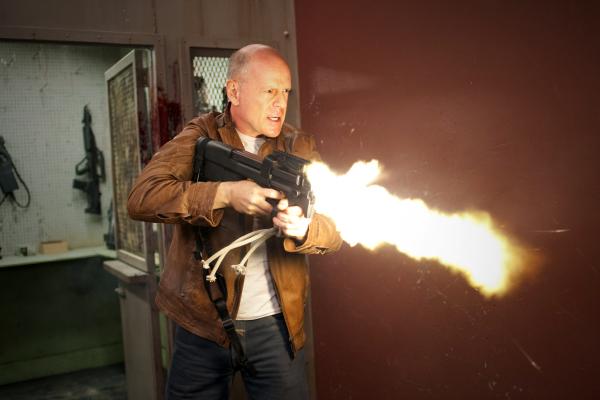 The full length trailer for LOOPER has finally arrived and not a moment too soon. The plot of LOOPER is an interesting one. The year is 2042 and Joe (played by Joseph Gordon-Levitt; INCEPTION) is a hitman. He’s not your regular type of hitman but what is known in the future as a “Looper.” Time travel is now a reality and when a shady organization (one that Joe works for) wants someone dead they send him back in time to a Looper who murders him and disposes of the body. The target disappears without a trace. Fascinating stuff. Things get hairy when Joe’s next target looks an awfully lot like himself (and Bruce Willis; PULP FICTION).

Once again we are faced with the time travel paradox. I’m trying to figure out how this scenario could take place and it’s giving me a headache. Old Joe, in theory, has already gone through the occurrences in this film but as young Joe. So by that account young Joe cannot succeed in killing old Joe. Why would young Joe even want to kill old Joe? That would mean he kills himself and ends his life at middle age. He would die by his own hands (nerd trivia: what movie does Bruce Willis see himself die in?) Or does something happen and a new timeline begin as a consequence ala JJ Abrams’ STAR TREK?

Anyways, no need in nerding out over the potential plot threads since I’m definitely going to watch LOOPER. I’m hoping that writer/director Rian Johnson has something truly unique up his sleeve. After all, he sought out Shane Carruth (writer/director of PRIMER) as a consultant on time travel possibilities. If you are a fan of Sci-Fi or time travel I highly suggest watching PRIMER but be sure to have your thinking caps on as it does not slow down for anybody. Better yet, get a Master’s in Quantum Physics in preparation.

Previously, Rian Johnson reinvigorated the film noir genre by setting his film, BRICK, in a high school (also starring JGL) and made a really fun con-men film in the BROTHERS BLOOM with plenty of twists. I’m sure LOOPER with the talent in front of and behind the camera will be  at the very least a fun time at the movies and at best a time travel cult favorite in years to come. With a budget of $60 million and financed by indie friendly Film District we can be confident that Johnson’s vision will not be compromised.

Looper appears before your eyes on September 28th, 2012 in theaters nationwide.