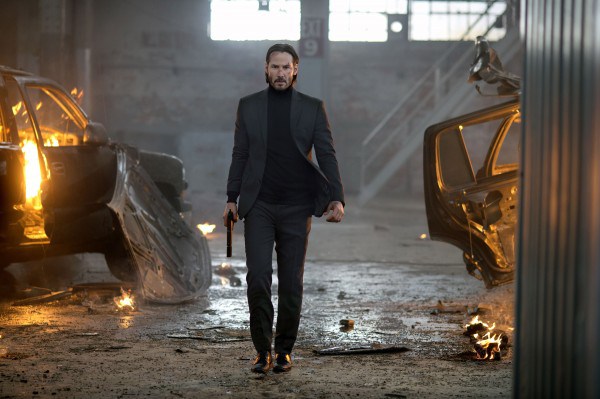 Keanu Reeves (47 RONIN) is lookin’ to go old-school MATRIX Neo (not morose RELOADED/REVOLUTIONS Neo) on a bunch of baddies this October with his new crime-thriller JOHN WICK.  Reeves plays the titular John Wick, an ex-hitman who gets back into the game after having a price put on his head by a crime boss.  Sure, it may sound like the stereotypical action movie set-up for this kind of character and plot, but holy shit it looks awesome!  Check out the first trailer below:

I gotta admit, if Theon Greyjoy (Alfie Allen) from GAME OF THRONES broke into my house and killed my dead wife’s adorable widdle puppy, I’d probably go to war, too.  All in all, it looks like it could be some ridiculously fun violent action fare to lose yourself in for two hours.  Reeves has got his intimidating rasp on, the film has got an “neon 80’s thriller” vibe going for it, a lot of the action sequences look really solid and the cast boasts some pretty powerful players such as Ian McShane (HERCULES), Adrianne Palicki (G.I. JOE RETALIATION), Michael Nyqvist (MISSION: IMPOSSIBLE- GHOST PROTOCOL), John Leguizamo (KICK-ASS 2), Jason Issacs (A SINGLE SHOT) and friggin’ Willem Dafoe (THE GRAND BUDAPEST HOTEL).  It may not be the most original story to tell (contract killer comes out of retirement for vengeance), but at least looks like a helluva ride.

So long as it isn’t PG-13-ified and neutered like THE EXPENDABLES 3.