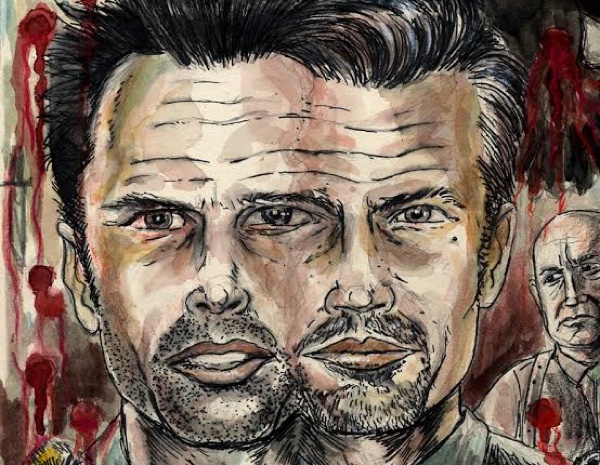 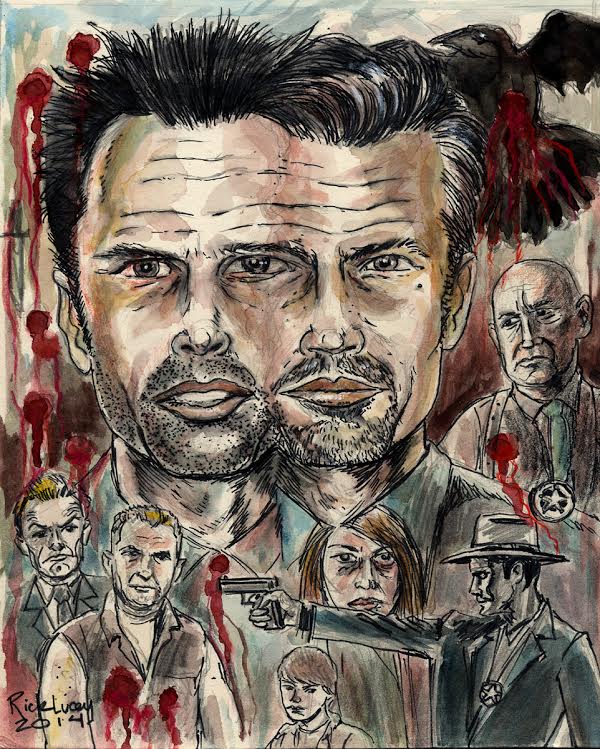 Damn, Boyd Crowder looks like a pop punk dad. He stands there with hair spiked up by natural or unnatural means, wearing thrift store suits and sporting a chain wallet/watch. He’d be my best friend in tenth grade, we could go on adventures together. Then maybe he’d start playing guitar behind a screen for Bad Religion and we wouldn’t talk for awhile. He would have found a close approximation of the dream we shared. He’d watch the 17 year old fans stay the same each year, but if he closed his eyes really hard and tried, he could still feel that thing he felt the first time he picked up that axe from Guitar Center. Slowly, and slowly light would come pouring in and he’d wake up in a bed with Manic Panic stained all over his hands wondering if it was all a dream.

Thats the Boyd Crowder of the fifth season of JUSTIFIED. Over the course of thirteen episodes, we watch the character who has come the closest to defining what the show actually is about slip slightly away. All of his careful scheming still pays off, but it doesn’t ever seem as exciting and vital. His soliloquies and quips feel more phoned in and cartoony. And the only people around him that gave him his own humanism, Ava and Jimmy, leave him voluntarily or otherwise by the time the season ends.

How much of this gutting of Boyd is intentional is one of the main problems of this piece in  JUSTIFIED’s story arc. This season is basically a series of circumstances that setup Boyd and Raylan for an ultimate showdown to close out the series (officially ending next season with its 6th and final). It’s a logical way to end the show, but it deflates a lot of the importance of the story and action in hindsight, and a lot of the supporting characters seem like they ultimately don’t matter that much.

That is selling short a season that almost made an actual actor out of Kangol Big and Tall model Michael Rappaport. If anything, the hickish burlesque of the Crowe family gives this season its true backbone. At times it’s like watching MARRIED WITH CHILDREN directed by Tarantino with all sorts of hijinks and mishaps. The Crowes are both goofy and dangerous, and the best moments of the season are when you don’t know what side that lies on. Rappaport for the most part manages to keep his characterization of Daryl on the right side of restraint, and even though as a villain he never seems truly intimidating, he was still the reason I often looked forward to each new episode.

Raylan’s role this season also has seemed a lot more sidelined than previously. The backdrop of his falling out with Art makes you feel like he might have to finally answer for his own hubris and disregard for those around him. As things progress though, it’s clear that that won’t happen as Raylan become more entangled in the Crowe story. It’s in his scenes with the Crowe’s youngest boy, Kendall, and with Ava Crowder where a new side and sensitivity to the character comes out. It’s an interesting glimpse into Raylan’s carefully guarded persona, and maybe one that will emerge fully coming up.

Ultimately, the fifth season of Justified seems to want to fracture the established myth of both of its lead characters. There are a lot of moments that feel like the show at its peak, but much of this season seems to lack the danger and weight that JUSTIFIED can also carry at its best. The sixth season promises to boil everything down to the two people that have defined the universe of Harlan and make them pay for their misdeeds and the wreckage they’ve left. Or maybe it’ll just end with Boyd pulling a sick kickflip.