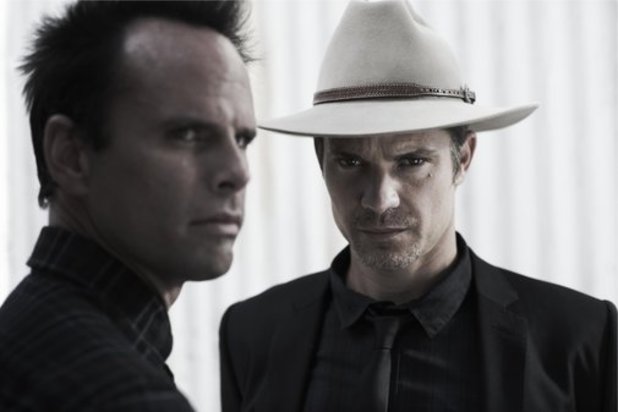 In DEADWOOD, Timothy Olyphant’s character Seth Bullock, was the person I gave the least possible f*ck about. He was kind of an arrogant dick, the kind of guy that would always point things out you already knew to make you feel bad and be proud of it. Olyphant, though, made you feel like there was something more behind him. That he knew that he was a dick but couldn’t help acting that way, that it was the one thing that he could hold onto while everything else around him got f*cked up. By the premature end of the show, Bullock almost seems the most sad and dejected even in a town full of prostitutes and people with twirly mustaches.

Olyphant’s Raylan Givens in JUSTIFIED also has this arrogance, but he uses it more successfully to manipulate the people around him. Each show centers around a community of intrinsically linked criminals and townsfolk who struggle to hold onto their traditions, their family, and their own personal moral code as things change. The closest things to bad guys each show has, Boyd Crowder and Al Swearengen, also both slowly morph into the people you care about the most and tie their f*cked up communities together.

JUSTIFIED’s fifth season opens with the welcome face of town jester Dewey Crowe (Damon Herriman) in the stands testifying again Reylan Givens in a brutality lawsuit. This scene epitomizes what bothers me about JUSTIFIED sometimes, its tendency to give its lead character a sense of invincibility. No matter how many laws he breaks or people he punches, he’s never gotten burnt for it. In fact, so many of the Reylan’s mishaps get forgiven with a heesy quip, I feel like the writers are auditioning for WHOSE LINE IS IT ANYWAYS? Towards the end of the episode, there are signs that this might change.

After the opening, we’re introduced to a plot involving Dewey’s newly introduced cousins headed up by Darrell played by a sweatpants-less Michael Rappaport (sporting a KFC influenced southern accent.) The Crowes are constant schemers, and Raylan is dragged down to the Everglades to investigate a crime mishap they were involved in. On the other end, Boyd Crowder (DJANGO UNCHAINED‘s Walton Goggins) plotline picks up from last season, sending him to Detroit with sidekick Wynn Duffy (Jere Burns) to Detroit pursue a botched heroin deal.

Much of the action takes place away from JUSTIFIED’s primary setting, Harlan County. This gives the episode a kind of disjointed and almost confused feeling. New characters are introduced and killed off without much real impact, and the level of violence and tits seemed to be upped in a way like the producers have been reading Maxim too much. Obviously the episode is setting up plot points that will continue through the season, and there are several that could pay off later on down the line. Justified is the best when it focuses on its primary characters’ contradictions, and the lies they have to constantly tell themselves to make it through the world. When actors from MAD TV show up you know things are rough, but hopefully this season will bring the goods as everything moves forward leading towards the 6th and final season.