Johnny Depp’s THE LONE RANGER gets a teaser 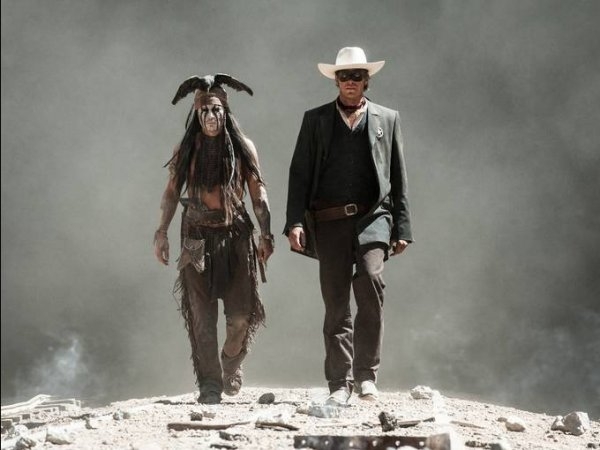 If you were to poll anyone on the street and ask “Who is the biggest Hollywood movie star right now?” chances are they would reply with a big fat “Johnny Depp.” At least that would’ve been the case a couple of years ago when he was riding high after THE PIRATES OF THE CARIBBEAN movies and the box-office crushing ALICE IN WONDERLAND. Lately, he’s been in a couple of box office misses (THE RUM DIARY, THE TOURIST, DARK SHADOWS) but it seems like he’s about to steady that ship –er, train– with Gore Verbinski’s THE LONE RANGER. He’s hooked back up with good ol’ Gore (the first three PIRATES movies and RANGO) to bring to the silver screen an adaptation of a 1950’s TV show nobody under the age of 65 remembers. This is studio herd mentality to its extreme. “We must make movies that have a built in fan base! It’s all about brand recognition. That’s how you get butts in seats!” Yeah, but that didn’t work with DARK SHADOWS which was also an adaptation of a really old TV show (1960’s day time soap opera to be exact).

Anyways, no matter what the intent is behind a project we can only judge a picture by the overall product. With that in mind, let’s have a look at what and how they’re trying to sell us this massive $250 million movie.

I was hoping this would be more RANGO and less PIRATES but there you go. It has a very adventure-in-the-wild-west tilt to it with nefarious business men behind the whole evil plot whatever it may be (it seems that it’s the railroads/industrial revolution/Manifest Destiny). All that is window dressing to what will surely be a “buddy cop” movie set in the west. After the briliant RANGO I was back on team Gore but now I think he might have backpeddled a little into DEAD MAN’S CHEST territory. As always we’ll see once the movie comes out. This is after all but a teaser. At the very least Verbinski is a natural at breathtaking visuals. His movies have a ton going on in the foreground, background and everything in between. He knows how to use the whole canvas. If you are interested in THE LONE RANGER I gather it would be most rewarding to watch on the big screen. With all the money they’re spending on it Disney needs you to do just that.

Depp and crew swashbuckle, I mean blast their six shooters on July 3, 2013.