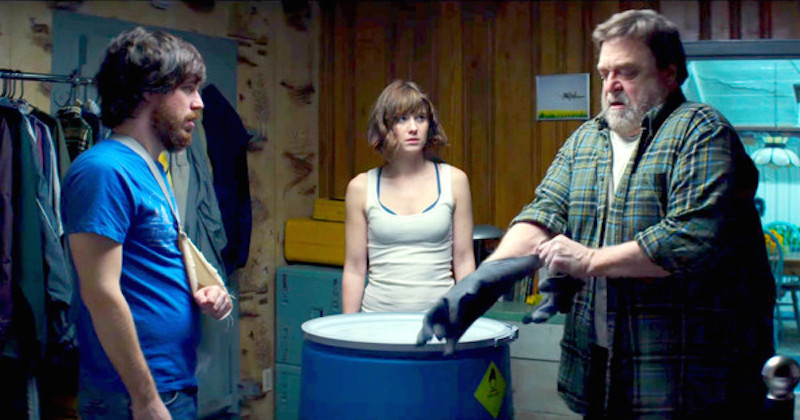 Okay, lets all address the giant monster in the room… Is this a sequel to CLOVERFIELD? It’d be NERD suicide to stand on my little apple box and say otherwise.  I mean, CLOVERFIELD is in the name of the movie!  The tag line for the movie is ‘Monsters Come In Many Forms.’ This is clearly a sequel to the 2008 giant monster mash… But… is it?

You can hardly consider 2008 a ‘dark age’ for the internet. I was no longer trolling for kisses in AOL chat rooms.  I was actually using the internet for important things like selling my comic book collection on Ebay and stalking celebrities on Twitter. We were also reaching the point where studios could no longer hide their upcoming movie projects from the world. Every major cinematic reveal was popping up on the internet days before the film’s official release.  You can imagine the techno junkie frustration when JJ Abrams revealed that he would be creating a POV monster destruction movie set in NYC and no one could dig up any information about it. ‘How did this movie make it this far into production without anyone knowing about it?’  To add insult to injury, CLOVERFIELD’s marketing department successfully trolled the entire internet with hidden website clues that linked to secret pages and videos that only brought up more questions than answers. Websites were releasing ‘official images’ of what the monster looked like and none of them ended up being real.  The trailer was cryptic enough that fan’s theories on what the film was actually about ranged from ‘random giant monster destruction’ to ‘out of control virus that turns people into dinosaurs.’  Somehow, 8 years later, J.J. Abrams has once again slipped a CLOVERFIELD movie past our radars and has everyone on the internet going mad with speculation.  What does 4813 mean?!

What is this movie about?  Well… it seems like John Goodman (THE BIG LEBOWSKI), Mary Elizabeth Winstead (SCOTT PILGRIM) and John Gallagher, Jr. (THE NEWSROOM) are all stuck in a bomb shelter somewhere in the world.  Is it New Jersey?  Is it Nebraska? Things seem to be pretty happy-go-lucky in the beginning until you start to notice that maybe Winstead and Gallagher are being held in this bunker against their will.  After a brief escape and glimpse of the outside world, you get the impression that Goodman’s madness mad be justified.  Is this shattered world the result of CLOVERFIELD’S attack in 2008?  Is their world now full of little monsters running around.  Is John Goodman actually the ‘monster’ in this movie and he’s using the attack on NYC to justify his madness?  Is this even a CLOVERFIELD sequel?  Who knows… the good thing though, we only have to wait 2 months until we find out.  Yeah… this movie is done and ready for release and is 2 months away.  Well done, Abrams.  Well done.