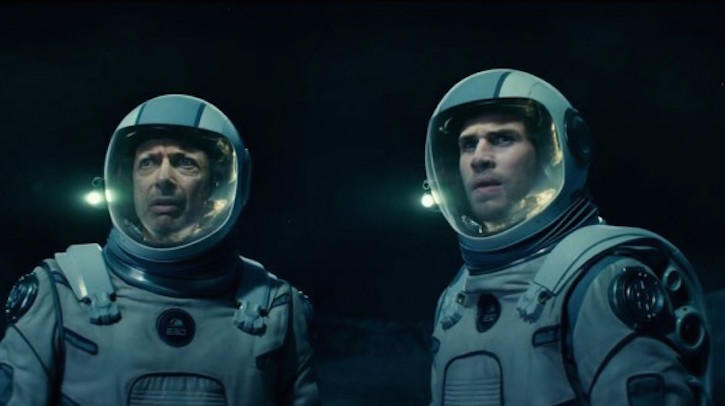 Isn’t it always a nice surprise when a movie you think is years away, suddenly drops a trailer and you’re like ‘Welcome to Earth, my new beautiful friend. Make yourself at home.’

First off, what is it with the INDEPENDENCE DAY movies and cars driving at night?  I feel like the first movie was full of that nonsense? Is there some symbolism I’m missing?  Are the cars, humans, as we try to navigate our way through a much larger and dangerous universe? You get the basic jist from this trailer. I don’t really need to explain the awesomeness of it to you. Can I, at least, nerd gush all over it in your presence? …  After the events of the first movie, Earth has used the remaining bits of alien tech laying around to fortify the planet.  I love this idea.  I think I read something similar in a novelized sequel to WAR OF THE WORLDS?  It reminds me of that moment in movies when the hero runs out of bullets and he never picks up the bad guy’s guns.  That makes no sense to me. It looks like some people are worshiping the aliens? You think these alien religious fanatics somehow bring about this new attempted destruction of humanity? I wonder how low the Earth’s population is after the first Alien World War? AWW! This trailer wins just for Bill Pullman’s beard alone.  I like that the kids from the first movie have all grown up to be alien ass kickers themselves. Laser guns and a moon base? Yup! There’s a few people running around wearing ESD jackets?  Earth Security Defense? I know I need to get me one of those jackets. OH! Speaking of ‘getting me one of those!’  Here’s the official reason why Will Smith isn’t in this movie…

‘While test piloting the ESD’s first alien hybrid fighter, an unknown malfunction causes the untimely death of Col. Hiller. Hiller’s valor in the War of ‘96 made him a beloved global icon whose selfless assault against the alien mothership lead directly to the enemy’s defeat. He is survived by his wife Jasmine and his son Dylan.’

When I first heard about this sequel, I put it in the same category as the HEROES REBORN show.  Do we really need this ‘squeakquel?’  I’m happy to report that we do need this sequel. We need it very much. Also, I spelled ‘Independence’ wrong every time I typed it.