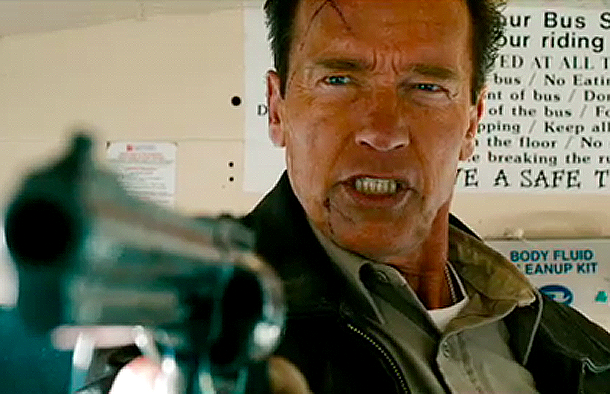 We’ve waited 8 long years for the return of Arnold Schwarzenegger (LAST ACTION HERO) and finally the trailer for his first leading man role since T3: RISE OF THE MACHINES has arrived. Arnold’s comeback is in the form of THE LAST STAND, a film in which he plays a border town sheriff who must stop an escaped drug cartel leader from reaching the border. Arnold and his inexperienced staff are the only thing in between the bad guy and Mexico. Sounds kind of dumb but plot in Arnold movies are besides the point. What made his movies so much fun were his one-liners, testosterone-filled fights and his ridiculously charming accent. Top it all off with the fact that this is Kim Jee Woon’s (I SAW THE DEVIL, THE GOOD THE BAD THE WEIRD) Hollywood directorial debut and this could make a visually interesting movie filled with elaborate action set pieces peppered with the Arnoldisms we’ve all missed so much. Below is the first look at the highly anticipated comeback. Has Arnold still got it? Will Kim Jee Woon have the freedom to make a movie his way? Does the script fit the momentous occasion or buckle under formulaic pressure?

Well, I’m a little bit sad. Before watching this trailer I planned on buying a ticket for opening weekend based on the premise, Arnold and director’s past work. Now I’m very hesitant. For starters, what the hell is Johnny Knoxville doing there other than serving as a poor attempt for comic relief? Rob Schneider from JUDGE DREDD comes to mind. The most disappointing thing, however, is that Arnold does not seem to be up on his acting game. He was never the greatest actor but his delivery and on screen presence made him a bonafide movie star. If this trailer is any indication of what the movie will be like then he needs to hit the movie star gym. His line delivery hits the ground with a thud and is it just me or does he look too old? I mean, awkwardly old. Aside from that the movie looks pretty generic much like the new Walter Hill (director of 48 HOURS) and Stallone (TANGO & CASH) trailer for BULLET TO THE HEAD.

I was unabashedly excited for this one and now I’m crossing my fingers it lives up to the hype (I created for it). Things don’t look too good though as its release date is on January 13th, 2013. A month known for studios to dump their crappy movies onto the public that aren’t good enough for fall Oscar contention or to duke it out for that summer blockbuster dollar. Either way I’ll give it a chance. He’d have to do much worse for me to “consider it a divorce.”