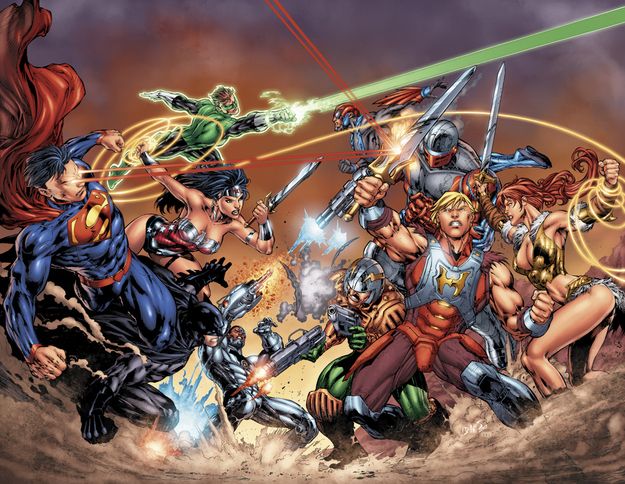 This September, two unlikely worlds will clash as Superman and Batman’s DC UNIVERSE will clash against He-Man and THE MASTERS OF THE UNIVERSE! Before you explode your already over-stuffed nerd brain thinking of ways these two worlds would (or could!) meet, let’s take a quick look at the official plot synopsis for this planned 6-part mini-series direct from DC:

After narrowly escaping his last battle with He-Man, Skeletor has fled to the most unexpected realm to recover: EARTH! Once there, he sets a plan in motion to siphon off Earth’s core magic. Forging an unlikely hunting party, He-Man and company go in search of Skeletor. Finding themselves at odds with the heroes of the DC Universe, He-Man and the Masters of the Universe must find a way to stop Skeletor and his mysterious new master!

Ok, so that makes perfect sense right!? Well, no not really, but who cares! Superman and palz are going to do battle with He-Man, Skeletor, and crew! That is something to most definitely be excited about. Kieth Giffen (52 AFTERMATH) writes and Dexter Soy (CAPTAIN MARVEL) does art in what is likely to be one crossover event you don’t want to miss.

DC UNIVERSE VS. MASTERS OF THE UNIVERSE #1 battles its way into comic shops September 4th 2013 with issue #2 following close behind on September 25th.

In the San Francisco area looking for your next DC UNIVERSE or MASTERS OF THE UNIVERSE comic book fix? If so, Check out MISSION: COMICS & ART. They’ve got you covered!