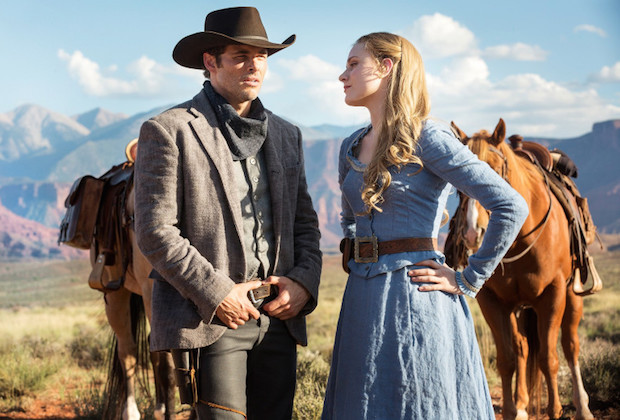 Ever since GAME OF THRONES became an international phenomenon, HBO has been trying to find another high quality drama to entice even more viewers to their channel, and they may have finally found it in WESTWORLD, a bold new science fiction show that was inspired by a film author Michael Crichton wrote by the same name.  The show centers around a fictional destination park called Westworld, a classic western environment populated by androids who are indistinguishable from humans.  The park offers 200 interconnected storylines that the guests can jump into, and while the guests can fuck, kill, or do anything else they want to the androids, the androids can not hurt the guests, but they can hurt each other.  After an update to the androids’ software by Westworld’s creator, some of the units start acting oddly and even go downright insane, causing a recall and a panic among the behind the scenes staff who scramble to fix the issues.  However, not all of the androids may be telling the truth anymore, and the consequences of any of them being aware beyond their controlled programing are potentially terrifying.  Beyond the androids and engineers, there is another player involved in this show, a mysterious guest who is ruthlessly searching for the deepest meaning of Westworld, something that has been hidden from even the most dedicated attendees, and he will stop at nothing to get what he wants.

The premise for WESTWORLD is extremely enticing, and the writing team does an excellent job of hooking the audience right out the gate.  What makes the story so much fun is the fact that it is a mashup of several genres, but they all work together because of the premise, so you get a western, a modern sci-fi thriller, a dramatic examination of the depths of the human condition, and intercompany intrigue.  Any one of these genres can give you a great show, but the way they mix them all so seamlessly and create a dynamic world that feels so very much like our own just a bit further in the future makes for a fascinating show that its hard to stop thinking about.  Beyond the premise, the characters, both human and android, are wonderfully well written and unique across the board, allowing us to empathize with them from the outset and pulling us into the show before we even realize a fraction of what is actually going on.

The production values are out of this world, which should come as no surprise given the continued high quality of shows done by HBO.  The western setting is perfect, with all the hallmarks one would expect, such as saloons, ranches, hotels, and an overabundance of dust.  This contrasts perfectly with the futuristic design of the company headquarters, which looks as sleek as it does cold, portraying a perfect example of a streamlined corporation that is hyperfocused on its product to the point that they don’t care about the visuals of their day to day surroundings.  Another excellent feature are the costumes, as they are prevalent and wide ranging.  Whether the business professional look of the engineers and businessmen behind Westworld or the variety of costumes donned by the robots and the guests, everything looks appropriate and heightens the realistic feeling of the show.  I quite liked the camera work in the episode as well, it did a great job of covering the action while introducing us to the theme park, so we get plenty of wide shots of the gorgeous environment, panning shots of various locations, and a variety of more intimate shots as the characters interact with each other.

If a great story and stunning production values aren’t enough, WESTWORLD also boasts an outstanding cast.  Leading the ensemble is Evan Rachel Wood (INTO THE FOREST) as Dolores Abernathy, one of the oldest robots in Westworld who is a favorite of both guests and the engineers.  Wood is delightful as a young, hopeful frontier woman, and outstanding as a robot trying to come to terms with the reality of their existence, giving us a performance that is as warm and heartfelt as it is cold and removed, which was very impressive.  Jeffrey Wright (THE GOOD DINOSAUR) takes on the role of Bernard Lowe, head of programing for Westworld.  Wright is a perfect fit for this role as his quiet, collected demeanor work well for Lowe’s meticulous, thoughtful nature; and he easily portrays the deep well of thought that is hiding underneath, giving us one of the more intriguing characters of the show.  Stepping into the part of the mysterious Man in Black is Ed Harris (SNOWPIERCER) and he’s a scene stealer as the steely, cold hearted man on a mission.  The Man in Black is searching for the deeper meaning of Westworld and will do anything to find it, and Harris excels at being ruthless and terrifying, giving us one of the most detestable but interesting characters.  Legendary thespian Anthony Hopkins (THOR: THE DARK WORLD) takes on the role of Dr Robert Ford, founder of Westworld.  Hopkins is outstanding as the mysterious proprietor of the park whose motives are a mystery but are clearly of consequence as his updates are responsible for the detrimental changes to the park’s robots.  Hopkins has a style that is subtle, but incredibly engrossing, and he creates a fascinating character out of Ford, one that we can’t wait to discover more about.

If you have any sort of access to HBO and you aren’t watching WESTWORLD you are missing out.  The story is fascinating, the production is top notch, and the acting is superb.  Moreover, it has everything anyone could want from a show: action, drama, intrigue, and a healthy dose of mystery.  If you have even the slightest interest in this series you need to check it out, because it is definitely the best new show to hit TV this season.