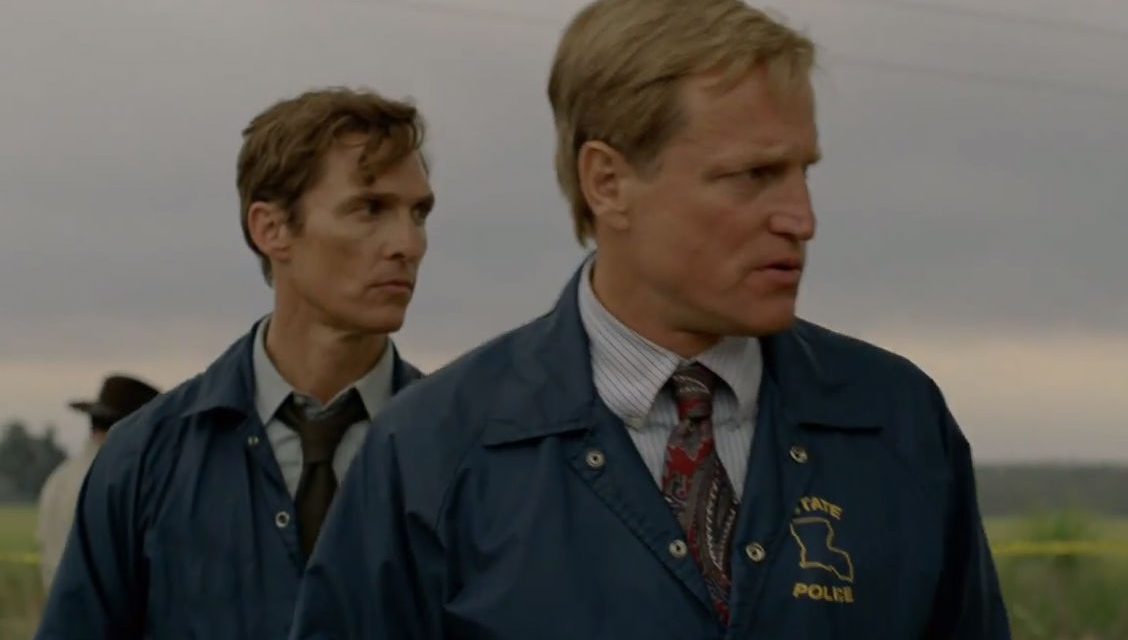 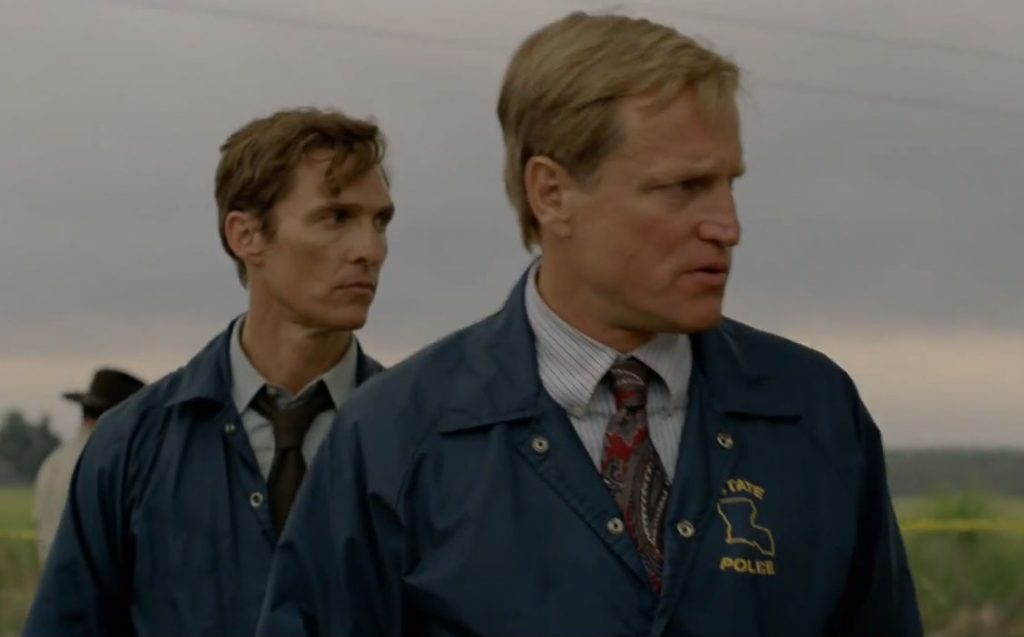 Dammit HBO. Now I have to add yet another television series to my (often mentioned) over-saturated DVR list. The silver lining here is that HBO’s TRUE DETECTIVE is more of a mini-series (think BAND OF BROTHERS) running only 8 episodes per season. And for those of you not in-the-know, TRUE DETECTIVE is unique in that each “season” will feature a completely different cast of characters with a completely different plot. The glue that binds each season will be the “detective” theme and a new case to solve. Sounds pretty great to me, and it sure is a sneaky (yet wise) way to get some top talent aboard due to the short commitment asked of the actors. Not to mention the fact that it won’t matter too much if the series gets cancelled since each season will be so self-contained.

This first season of TRUE DETECTIVE is brought to us by writer and creator Nic Pizzolatto (an award-winning novelist relatively new to this whole “screenplay” thing) and each episode will be directed by Cary Funkunaga (2011’s Jane Eyre). The story takes place in the backwoods of Louisiana and spans a staggering 17 year investigation with plot twists and turns aplenty. Basically what we have here is the introduction of the main characters (more on that in a second), an interesting look at a very simple yet complexly disturbing Louisiana setting, and an idea of where we are headed this season with the initial discovery of a brutal and disturbing murder scene. The story hops back and forth between the past and present with ease and it all just meshes together surprisingly well to craft an intriguing and captivating introduction.

What grabbed me the most here was not necessarily the beautiful cinematography or pitch perfect pacing of the story (even though those definitely were great), but rather the characters, both main and peripheral. Heading up the frontline is Matthew McConaughey (Check out MUD if you have not yet) as a detective with some serious baggage named Rust Cohle and Woody Harrelson (ZOMBIELAND) as his by-the-books partner in crime named Martin Hart. Both detectives seem squeeky clean and dapper in their former years, and seeing them in the present (17 years later) raises a lot of questions. Without spoiling much, I will say that one of the characters seems to have been put through the ringer and then shit right back out. The juxtaposition of these two timelines not only raises a lot of questions, but it adds a new and creative dynamic to a show that will likely have most viewers eager for episode 2. This first episode has a great way of making you care about these characters. And the chemistry (or lack thereof) between these two all-star actors is something to behold. Their interactions and blatant differences often had me chuckling and a few of their conversations raise some pretty interesting questions of the spirit and human condition. There was one awkward conversation in the car about religion as they drove past a number of electrical posts shaped like “crosses”. While I’m not sure if it was intentional (seeing how there are unintentional cross shapes just about everywhere), it really heightened the scene for me and just seemed perfect. Just one of many “perfect” scenes in this episode. i’ll let you discover the rest on your own.

Besides the two main bad boys here, we do have an interesting character in the form of Michelle Monaghan who plays Martin Hart’s wife Maggie. She looks to be a main player down the line, and even though she wasn’t featured here all that much, I get the sense bigger things are in store for her possibly involving detective Cohle who she had an oddly large interest in during their first encounter. But I must say the creators here did a wonderful job making their version of Louisiana a character in itself bristling with odd and interesting characters with distinct personalities. This series does a wondrous job hiring side actors to play simple roles such as a store owner, bar hopper, or old man at home that just don’t seem like actors at all. They just blend into this universe and it feels as if they live there. TRUE DETECTIVE just shines as a character piece for the main players and creates a living breathing world with its array of unique side characters who are all in top form. It’s just one of those things you need to witness to understand. And those with a sharp HBO eye may see a THE WIRE alum showing up for a brief moment. Doll house furniture anyone?

All in all, I can recommend this show 100% to “fence-sitters”, those of you who had no idea this show even existed, or even those of you who had high expectations like I did. TRUE DETECTIVE delivers in every way I can imagine and now all I have to do is sit back and enjoy the ride. My only complaints here would be that I found myself mimicking Matthew McConaughey’s perfectly lispy voice for the better part of an hour after the credits rolled and the obvious title comparison to another great HBO show TRUE BLOOD. All kidding aside, TRUE DETECTIVE is not to be missed. People will be talking about this show. Trust me. A healthy blend of fantastic actors and characters, a living breathing Louisiana setting, and intriguing story line full of questions and mystery, and stunning cinematography make TRUE DETECTIVE a hit in my book. I just hope they can keep it up for 7 more episodes. Do yourself a favor and go watch this show right now. And it really is true what they say; it’s not TV it’s HBO. Ok, that was stupid, but I think you catch my drift bro.