Last week HBO premiered their new series LUCK, and it looks like they might have found a new flagship series. Being set in the world of horse racing, LUCK explores all the aspects of the sport. From the pure thrill of the high-stakes race to the shady back-door deals; from the high-rollers in the clubhouse to the lowlifes in the grandstands; from the jockeys and trainers to the horses themselves; this series looks like it will deliver.

The show also promises some truly amazing race scenes, with shots in the first episode that appeared to be filmed by horse-mounted cameramen. And with a cast that includes some of the best actors working today, this series could possibly become my new favorite television show.

LUCK stars Dustin Hoffman (MIDNIGHT COWBOY, RAIN MAN) as Chester “Ace” Bernstein, who at the beginning of the episode is released from prison after having been incarcerated for three years, and who seems to show shades of both the high-roller and the lowlife. Right away, Ace meets up with a track official to discuss opening casino games in the clubhouse. As the episode progresses, it’s clear that Ace has many associates in and around the racetrack; he also has a hot temper, so it’ll be great to watch the ways his influence intersects with all the other regulars at the track. 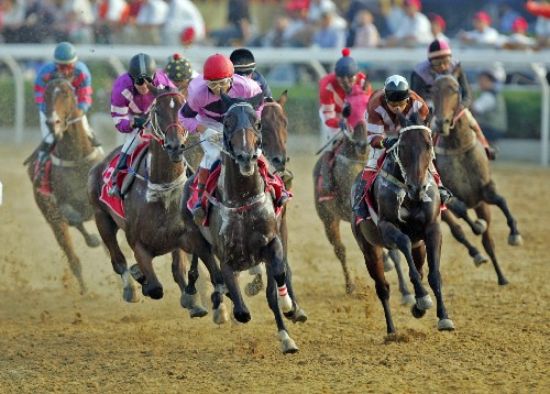 It’s a treat to see Hoffman on the small screen, but what’s so brilliant about his performance is how humble and subtle it is. It would be easy for the show’s creator, David Milch (DEADWOOD, JOHN FROM CINCINNATI), to use Hoffman as a kind of crown jewel of the series, but judging from the first episode, it looks like Milch intends to give equal time to all characters, regardless of the actors portraying them. This decision bodes well, because it suggests he’s more concerned with developing a quality story than with creating a star-vehicle.

Being the pilot episode, many characters are introduced and many plots are begun. Ace’s driver Gus, played by Dennis Farina (SNATCH), has recently bought his first horse, “Pint of Plain,” apparently at Ace’s request. John Ortiz (AMERICAN GANGSTER) plays a promising young horse trainer named Turo Escalante, who is revealed to be a successful but crooked businessman who works with several valuable horses at the track, including the young “Pint.”

Another storyline follows Walter Smith, a trainer and owner portrayed by Nick Nolte (WARRIOR), who seems to keep to himself, and whose significance in the bigger picture is hinted at, but is not yet clear. He’s found a young jockey named Maggie, still naive to the sport, to ride his dark horse “Gettn’up Morning,” but another jockey may replace her. A third storyline follows the fate of four track regulars who pool their money for a pick six on one of Escalante’s horses, which they suspect is a much better runner than they have been led to believe. 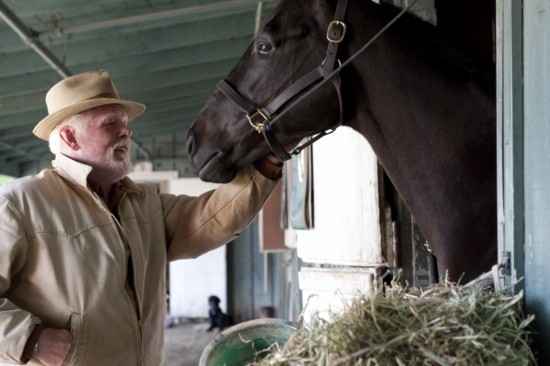 Besides these main storylines, there are more small plot points that are briefly introduced, which makes the episode a little hard to follow at first. But I’m willing to chalk that up to the learning curve that comes with any new show. It’s difficult for a pilot episode to reach the level of greatness itself, but this particular pilot holds a sense of mystery and disaster that suggests some good television to come.

As the season develops, I think we will get to witness plenty of heartstopping horse races. Having been to my first real horse race recently, I can say that it’s an experience that’s hard to match. I’m also excited to see exactly what direction the series takes with its main characters. Ace is revealed to have connections to organized crime, which seems like an interesting route to take. However, I do have some reservations about another HBO series that has a basis in the mafia. I’d be more interested in seeing how high the stakes can rise between the people behind the scenes, including the trainers and owners, and some of the track’s patrons. At such an early stage, these are still real possibilities.

No doubt each of the stories will intersect at some point, and with Michael Mann (COLLATERAL, MIAMI VICE) producing, I can only dream of the wild and masterful storytelling we will be facing through the first season.

LUCK airs Sundays at 9 pm on HBO and can be watched anytime if you subscribe to HBO GO. It is also worth mentioning that LUCK has secured a second season with HBO due to the success of this premiere episode.