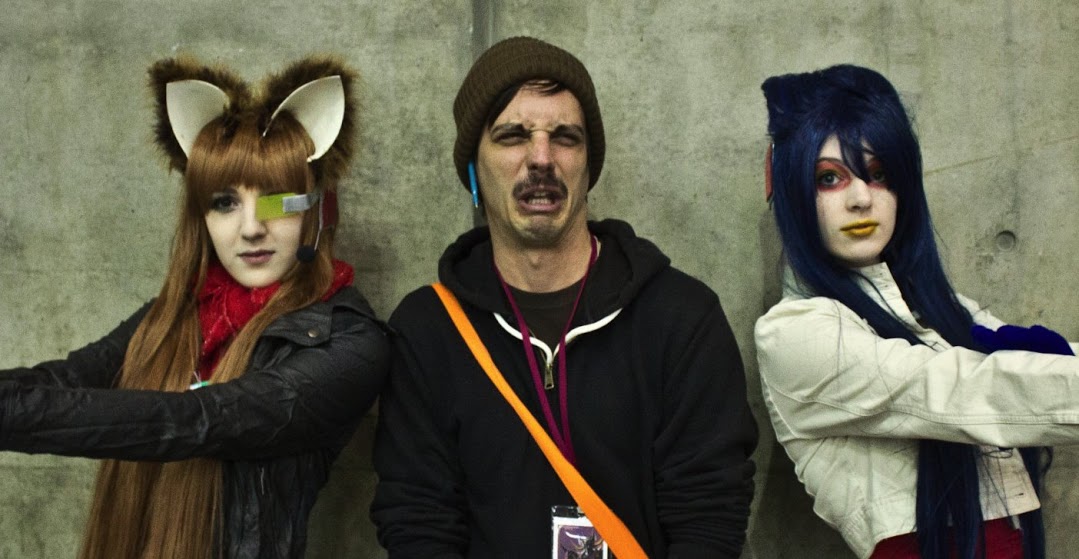 Me and my friend Derek, who also happens to be a contributing writer/artist for this site, decided to pack our bags, hit the road, and head on over to the January 2013 edition of Sacramento California’s SACANIME CONVENTION celebrating all things anime and dressing up like a fool. Mind you, I think dressing up like a fool is pretty awesome and fun! Did Derek or I dress up this year? Well, if you consider 2 unkempt looking nerds wearing beanies to cover up their nappy un-showered hair running on 2 hours of sleep due to watching way too many animal blooper videos on Youtube a costume, then YES, we dressed up. So what do 2 aging nerds with a belly that sounds like the deepest depths of a Rancor den do on a road trip to Sacramento? They get their happy asses to the first IN & OUT BURGER they see of course!

It’s very important to eat a crap ton of food before a convention because the offerings at the show itself are dismal at best. Just for the record, neither of us actually got a burger. We both got an animal-style (grilled onions) grilled cheese. Well I got one, Derek ate three. When I asked why, all he said was; “Because I’m hungry.” Makes sense. I’ll get the last laugh when he spends the next 5 hours visiting “Brown Town.” My only real regret from our meal was that I drank a milkshake and about 4 cups of water. I was so damn thirsty I could have drank Pi Patel AND Richard Parker’s piss! The point is, I drank way too much and skipped going to the bathroom at IN & OUT because I can’t pee in front strangers.

After our initial mission was complete, we finally got off out fattening asses and hit the road again. Until next time my dear IN & OUT BURGER! Until next time. 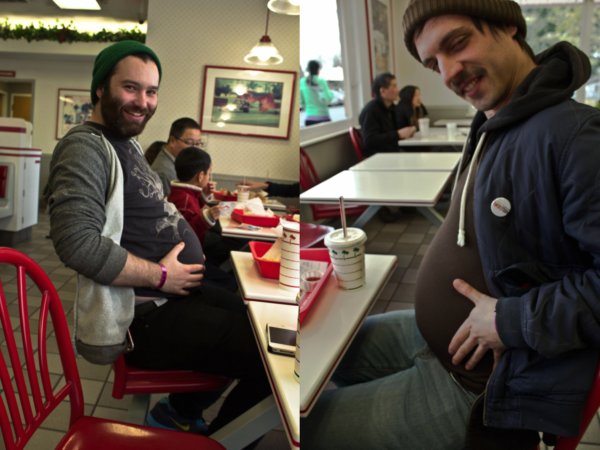 I have to be honest here. While Derek and I surely appreciate some good anime, our motives to attend this convention did not include dressing up, buying anime, or even checking out any of the scheduled panels. I mainly wanted to go to the show to people watch, see if I could find any missing volumes of the manga BERSERK I was missing, and to possibly see if any vendors had cool toys I wanted to buy. I was mainly looking for the recently-cancelled-in-North-America Link (from THE LEGEND OF ZELDA) action figure by the toy company Figma. While I had pre-ordered this months ago, Nintendo decided to not offer the toy in North America for some unknown reason causing prices for the Japanese version to skyrocket here in the states! Damn you! Derek, on the other hand, wanted to go to the convention to get his copy of BATMAN: MASK OF THE PHANTASM on Laserdisc signed by legendary Batman voice actor Kevin Conroy (BATMAN: THE ANIMATED SERIES). His misguided (yet creative) dream of getting a Laserdisc signed by Kevin Conroy became a sweet reality. Below you can see them in a seemingly empty warehouse. Creeeeeepy. 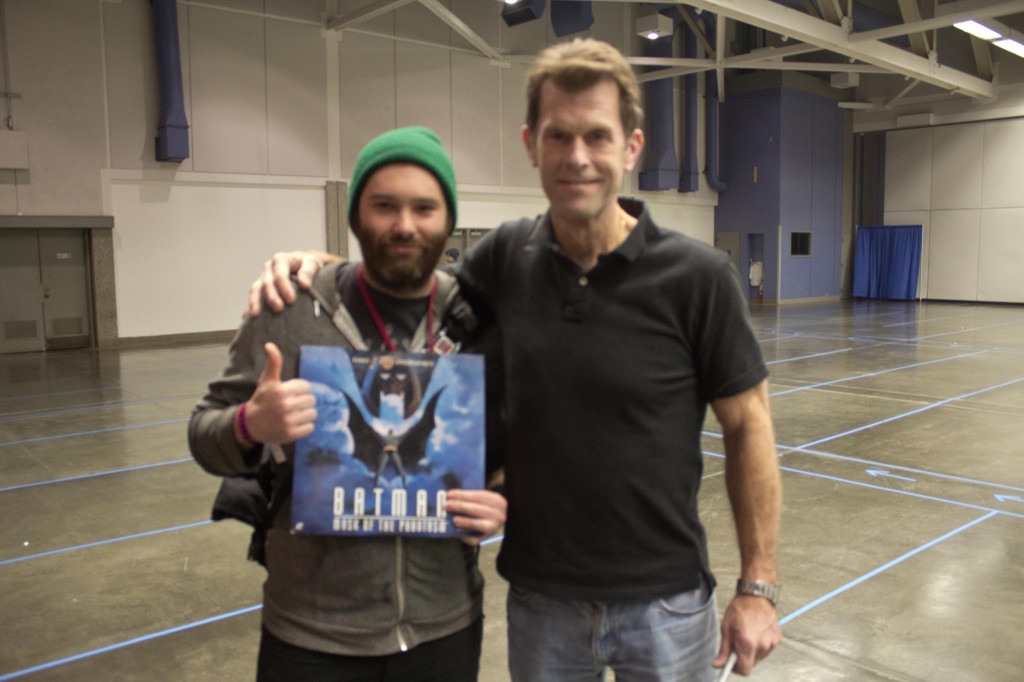 The autograph was free and Kevin seemed like a real stand up guy! Is that a Harry Potter wand in his hand!? Once we got that out of the way, we ventured toward the vendor room where all the comics, toys, movies, and guest artists were on display. The smell of fresh plastic and prepubescent body odor was in the air and I could not have felt more at home. I absolutely loved seeing everyone in costume. I just wish I went to the damn bathroom before we got to the convention. 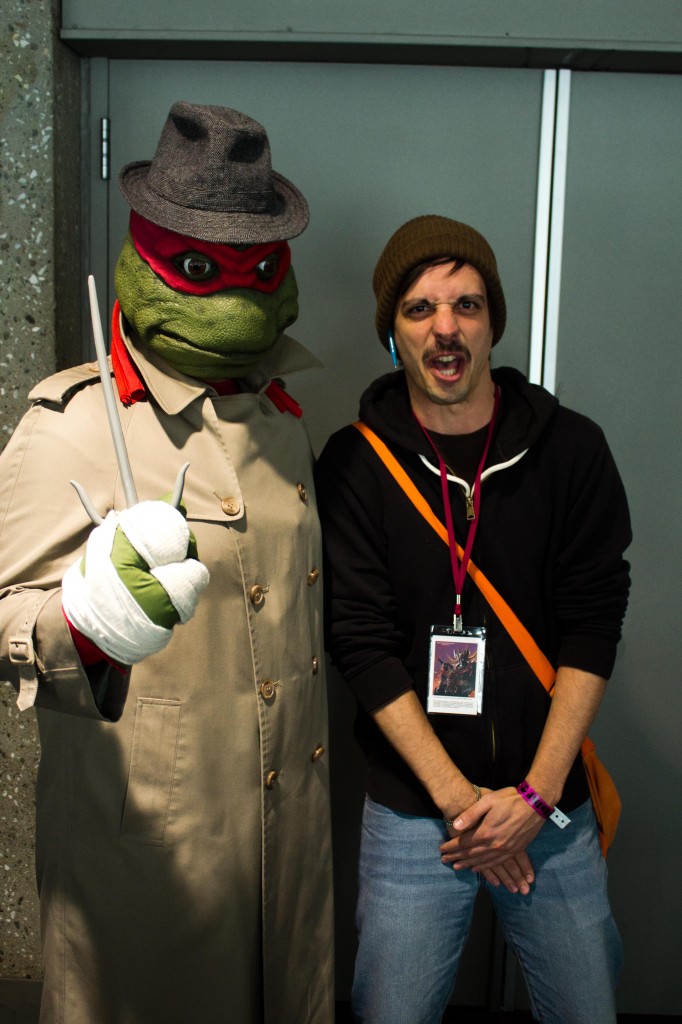 Alright, so it’s pretty obvious I need to find the nearest bathroom. The convention center was pretty big and there were people crowding the hallway everywhere. I couldn’t find a bathroom OR the vendor room and there was just so much to see and do. It was really evident that this convention was all about dressing up and showing off awesome costumes. I couldn’t help but appreciate all the work that went into these great costumes. “Sppppppllllllliiiiiinnnntttteeeeeeeerrrrr!!” 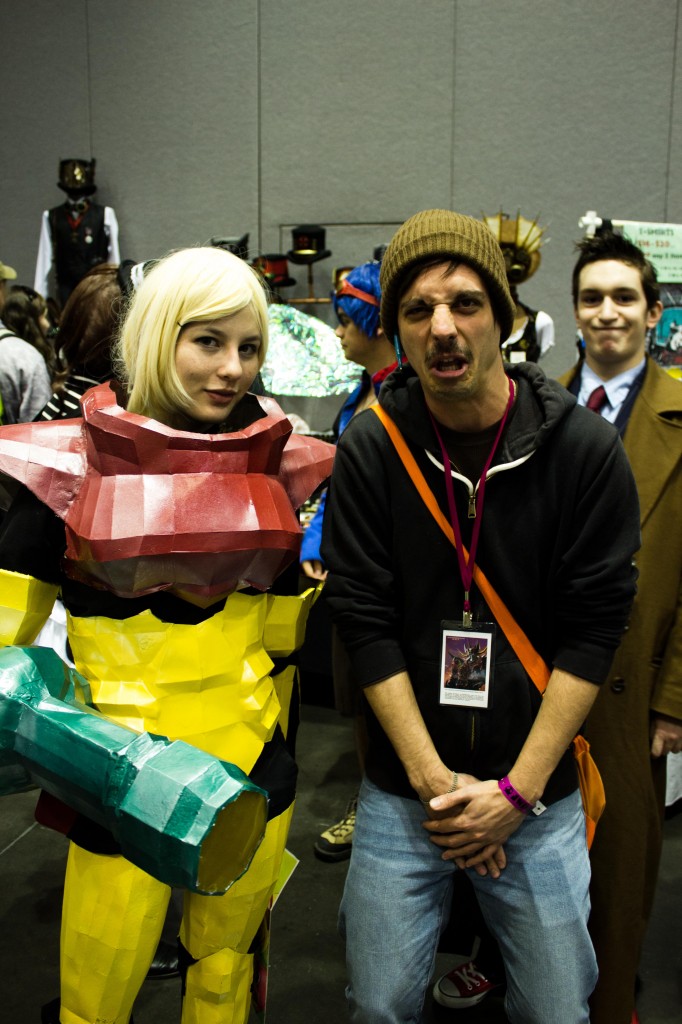 Alright, so we finally made our way into the vendor room and the hunt was on for those BERSERK mangas and that Link action figure! I still hadn’t found a bathroom but it didn’t matter because there was so much cool stuff to see. Ok, so it mattered a little bit. I am embarrassed to admit that a few drops of pee pee came out when I saw this hott costume of Samus Aran from the METROID series. Way to go lady! And guess who (ha!) showed up in the background! While inside the vendor room, I was lucky enough to find 3 volumes of the BERSERK manga I needed! There was no Link toy anywhere and everyone said my best bet would be to spend a crap ton of money on ebay before prices got even higher! Nooooooo! At this point, I desperately needed to find a bathroom so we ventured back out into the hallway after Derek and I each bought an expensive (but worth it!) Garrus Vakarian action figure from the MASS EFFECT series! 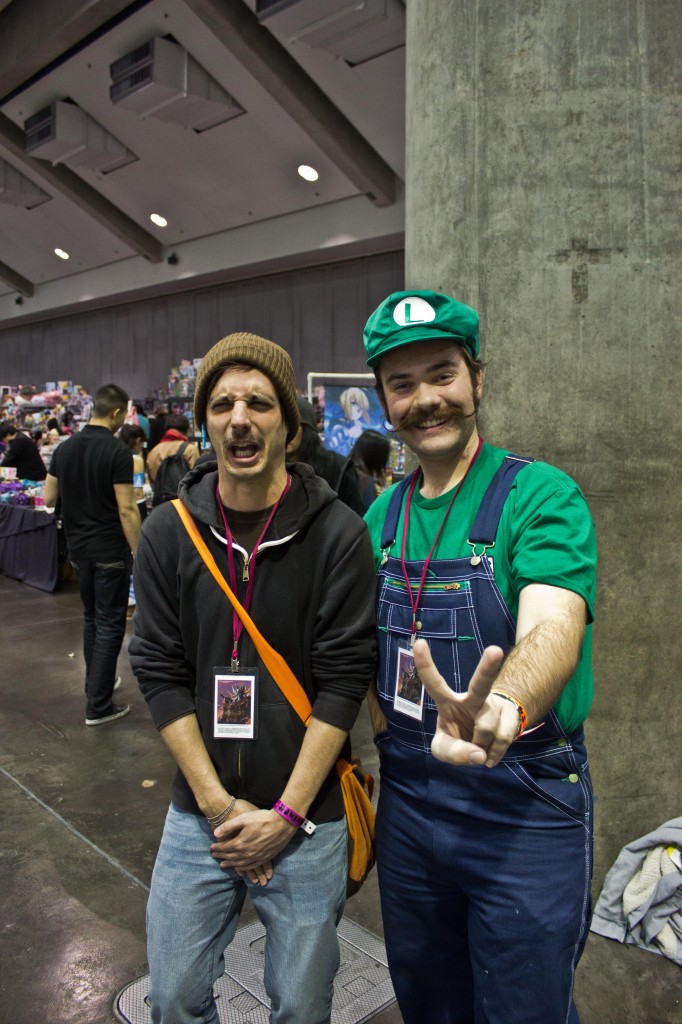 On our way out, I could not resist a picture with Mario’s under appreciated brother Luigi. He was walking solo and was wearing a great costume complimented by a great smile. I immediately regretted taking this picture however because it pushed my urinary tract beyond its limits. Damn you IN & OUT burger from 5 hours ago! The second this photo was taken I pushed and ran my way out of the vendor hall and looked for the restroom once again. Still nothing in sight but a bunch of colorful costumes that were only getting blurry due to my frail nerd body being intoxicated with an excess of urine. I thought I saw a bathroom sign ahead so I marched forth! 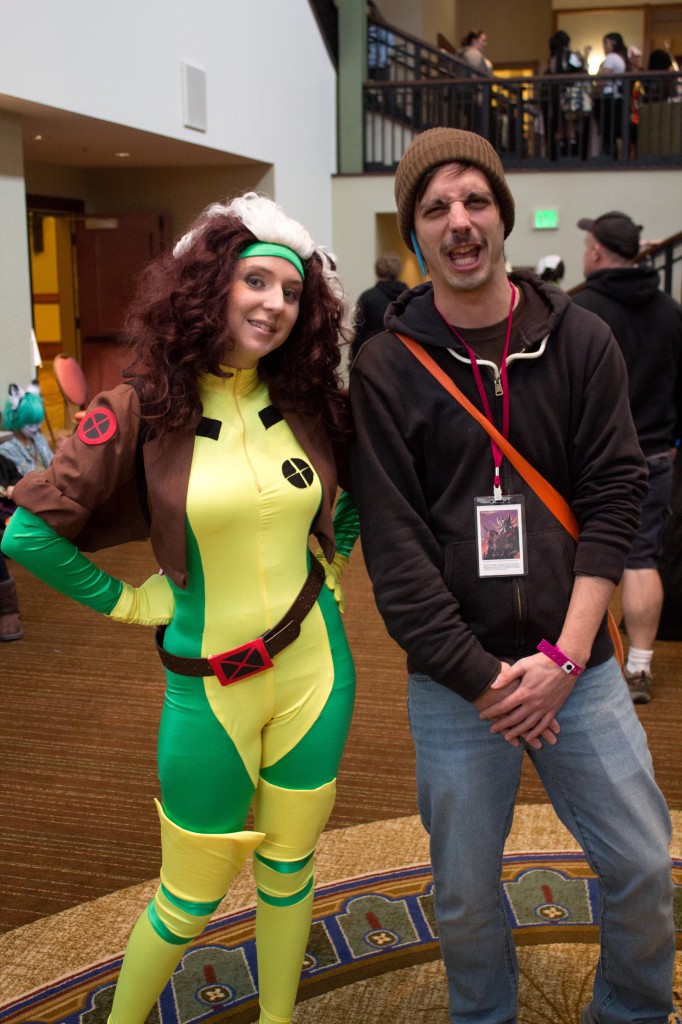 Clean skin. A winning smile. That unforgettable southern drawl. Who could that be? Why Marvel’s very own Southern Belle Rouge of course. I hope Gambit isn’t looking! But seriously, at this point I was seeing things and felt a giddiness and uncontrollable pain shoot through my wiener vein. I think the only comparable experience would be the transformation Johnny Blaze went through to turn into Ghost Rider. Yes, it was that bad. No bathroom in sight. What the hell was I suppose to do now!? 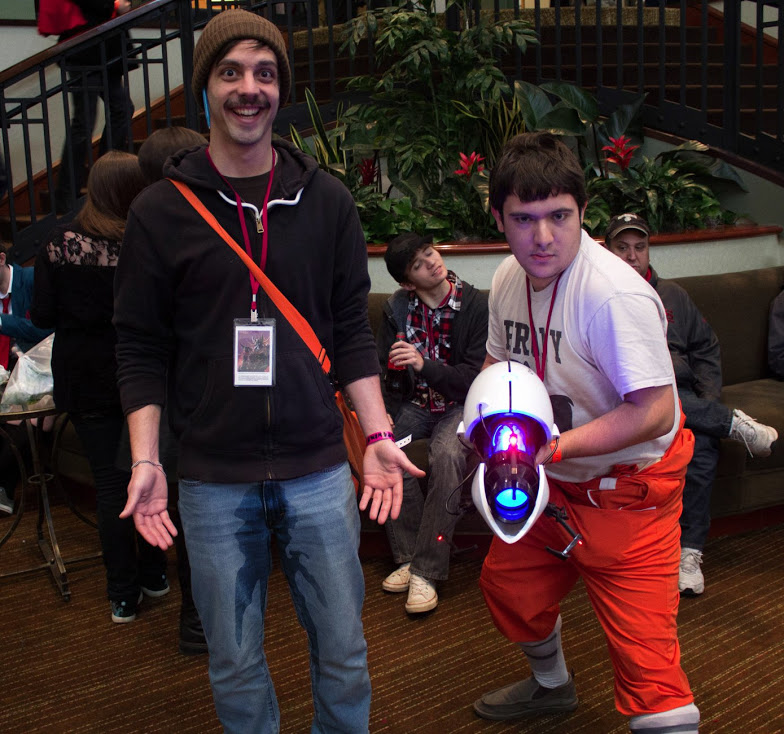 Once I saw this dude version of Chell from PORTAL 2 I knew all bets were off. I couldn’t contain it any longer and decided to use “scuba diving rules” and just pee in my damn wet suit. Sure my wet suit was a pair of new jeans but who cares!? The important thing is I got to attend an awesome anime convention with my good buddy Derek and pick up some cool books and a sweet toy!

As our eyes began to sag from the general lack of sleep we had the previous night (damn you animal blooper videos!), we decided it was time to gather ourselves and head back home. As we rode into the sunset, back past the IN & OUT BURGER, the memories of our colorful and fun nerd field trip put a smile on our faces. And that my fellow nerds, is what life is all about.

See you on the next field trip!