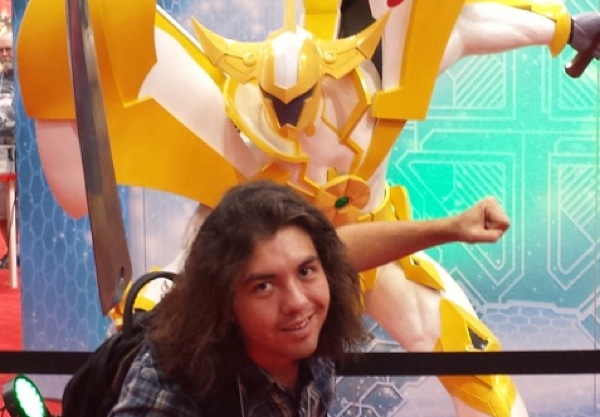 On August 15, 2013, Gen Con, the self proclaimed “best four days in gaming”, once again descended upon Indianapolis, Indiana, taking over downtown Indy and ruling it with D12’s in hand.

For those of you not familiar with Gen Con you may be wondering, “what is a Gen Con?” Well wonder no more because you’ve come to the right place to find out what Gen Con is.

This year marked the 46th annual Gen Con convention held in Indianapolis which hosts over 11,000 events that range from MAGIC: THE GATHERING, HEROCLIX and DUNGEONS AND DRAGONS to a Cosplay contest, anime related events and this year even had a visit from Peter Davison (DOCTOR WHO).

That’s not even the tip of the iceberg for this 24 hour convention but I think you can get where I’m going…there’s a plethora of gaming and nerd culture related events that go on at Gen Con. 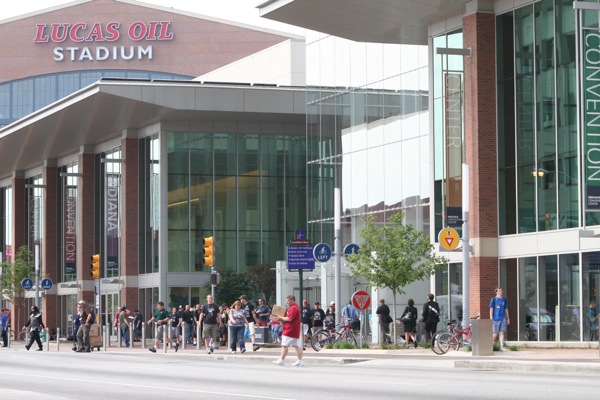 Walking into Gen Con is always a nostalgic, euphoric and overwhelming feeling, everything that you admire about nerd culture, table top gaming, electronic gaming, anime, and more is all compacted into the huge Indiana Convention Center. Each time I attend Gen Con I have to ask myself, “where do I begin?”

With so much excitement coursing through my body I felt as if I had too much excitement and  decided to use the restroom. Standing at my urinal I was accompanied by cosplayer dressed as Deadpool to my left and another cosplayer to my right dressed as Princess Peach. Taken back for a second because of the enormous amount of chest hair coming out of the top of Peach’s dress I released, “Yup, I’m at a con and yes, how this whole urinal situation is playing out is exactly how it should be.”

For four days the Indiana Convention Center was a sanctuary of everything we as convention goers hold dear and near to our hearts, and for those for days our culture was what was the norm and the cool thing.

After my revelations I ventured out of the restroom and into the game room. 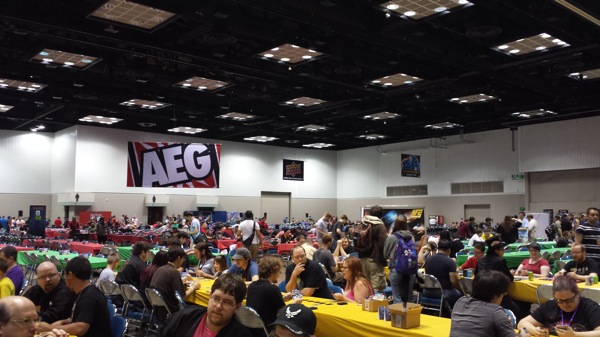 Venturing into the gaming room I decided to learn how to play MAGIC: THE GATHERING. While I had never played MAGIC before, I had played YU-GI-OH and the NARUTO COLLECTIBLE CARD GAME, so I had some background in card games.

Wizards of the Coasts, the company behind MAGIC, had set up an area for people to learn how to play MAGIC on Xbox 360 via MAGIC THE GATHER: DUELS OF THE PLANESWALKER 2014 — a video game available for iOS, andriods, PlayStation 3, Xbox 360 and Steam.

With a tutorial under my belt I decided at some point during the convention that I would try and participate in MAGIC: THE GATHERING  tournament to test my newly acquired skills. It would be a way to really get a feeling for what Gen Con is all about.

Exiting the tutorial area I couldn’t help but notice a father and son learning MAGIC together. It was a scene I saw quite often throughout the convention and one that always made me smile. It’s always nice to see parents take interest into what their kids enjoy. 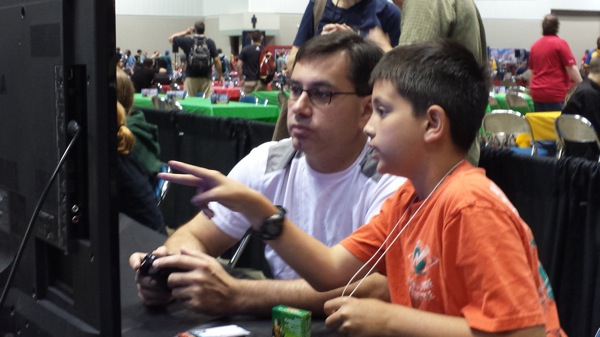 Next was the Exhibition Hall which was home to vendors selling everything under the sun when it comes to gaming or nerd culture and game creators offering demos of their latest games. 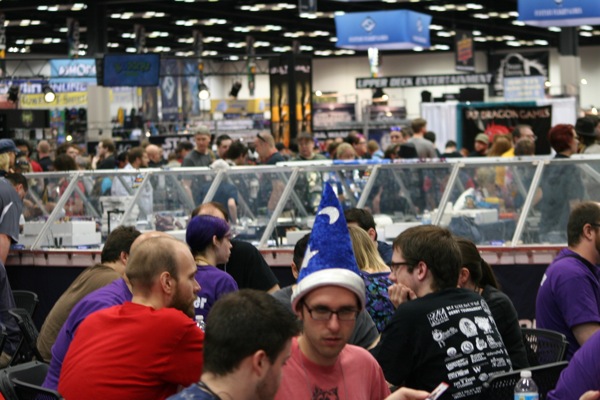 Just a small shot of the Exhibition Hall. 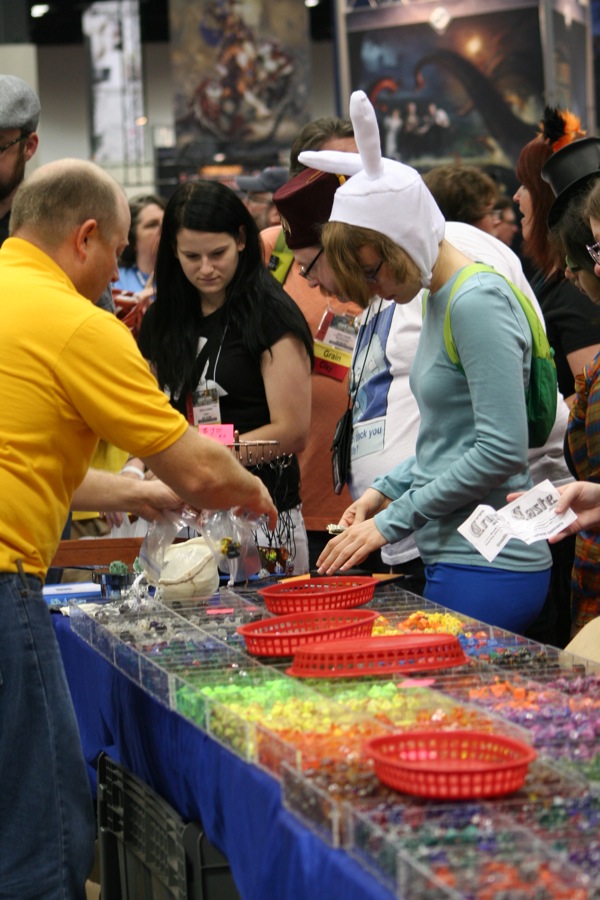 Convention-goers sifting through the myriad of dies offered at Crystal Caste’s booth.

Seeing a YU-GI-OH booth, I take the opportunity to see what this game has developed into and to see if Exodia was still the big boss man that he was when I was a kid.

To disappointment, Exodia wasn’t what he used to be, but the YU-GI-OH booth offered a lot to look out and from the looks of it, the game is still kicking. 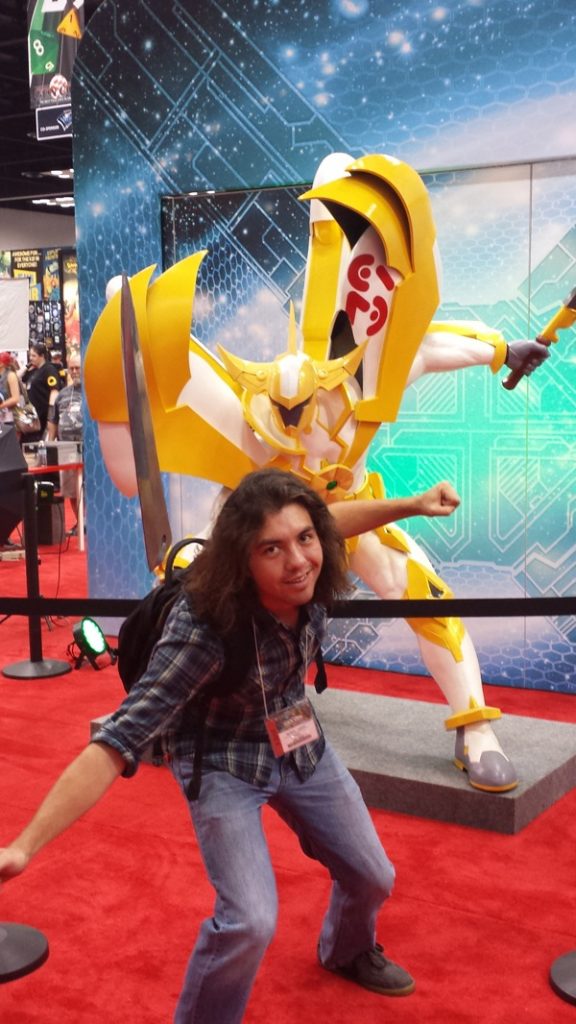 Me trying to be a YU-GI-OH card and failing.

With two days under my belt it was time to participate in some competitive gaming.

With a friend of mine, Luara, also being a novice MAGIC player we decided to combine efforts and skills to participate in a MAGIC: THE GATHERING Two-Headed Dragon Tournament. For those not familiar with MAGIC, this tournament is a team based tournament where teams of two face-off with two decks constructed from eight booster packs.

Laura and I felt that since we both had novice level skills that our skills combined would make us average players. Boy were we wrong. 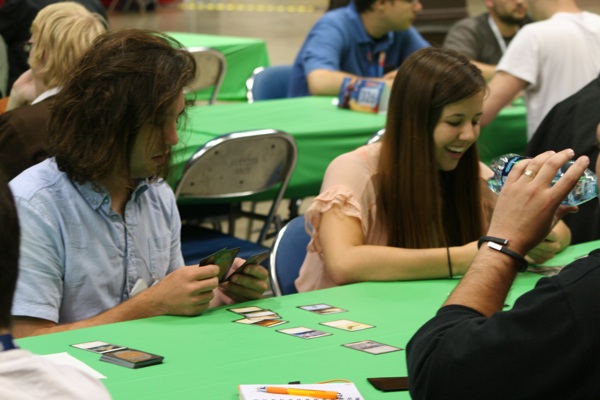 Our team tried and failed in this match, but we failed gracefully. 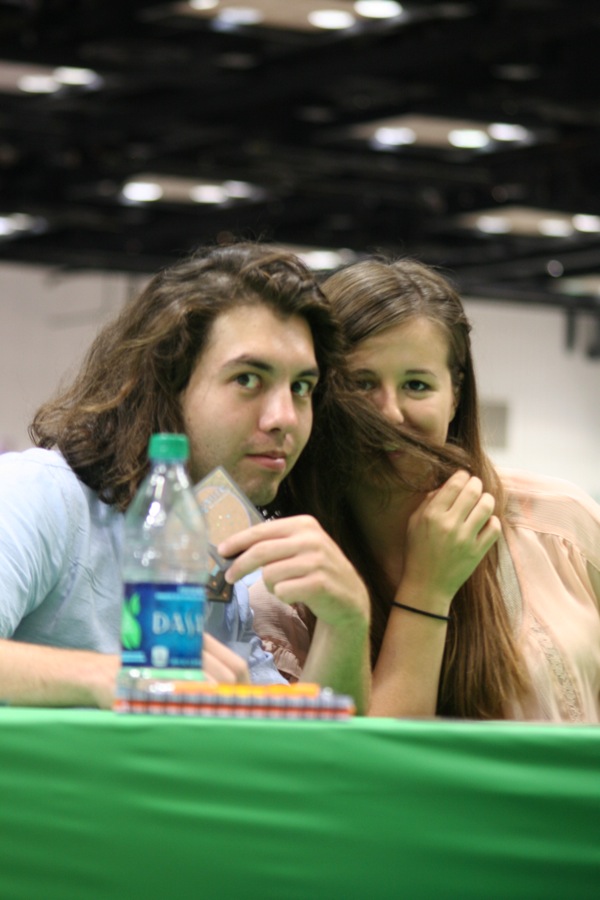 Our confidence in our MAGIC abilities is apparent in this photo.

We ended up winning two games in the tournament and losing two, so it wasn’t a bad outing, but it’s still a long way to become a MAGIC pro.

With the last day here it was time to enjoy every last bit of the convention that I could before I bid adieu. The only way to do that is by finding all the awesome cosplays that I could.

Cosplay is always a personal highlight of any convention for me. I give cosplayers a lot of respect because of all the time that they put into their cosplays. 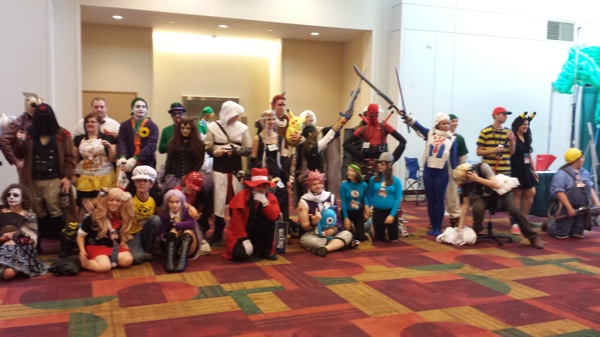 Walking through  the final hours of Gen Con gives you perspective on just how dedicated and loyal fans of gaming and nerd culture are. We save our money, build elaborate costumes and travel far and wide to convention centers all over the country, and maybe to other countries, to participate in conventions themed around our favorite things.

To be around convention goers who all hold the same things dear is an amazing thing. To go to an event like this in my own city is something equally as amazing seeing as Indianapolis isn’t always peoples first travel destination.

But for gamers, Indianapolis seems to be a destination that suits them just fine.

For Indianapolis, this is an event that holds huge economic value and is an event Hoosiers (a term we call people from Indiana) welcome with open arms. And for gamers, every August Indianapolis serves as a gaming oasis that truly lives up to the slogan “best four days in gaming”.

Who knows what gaming magic will happen at next year’s Gen Con.