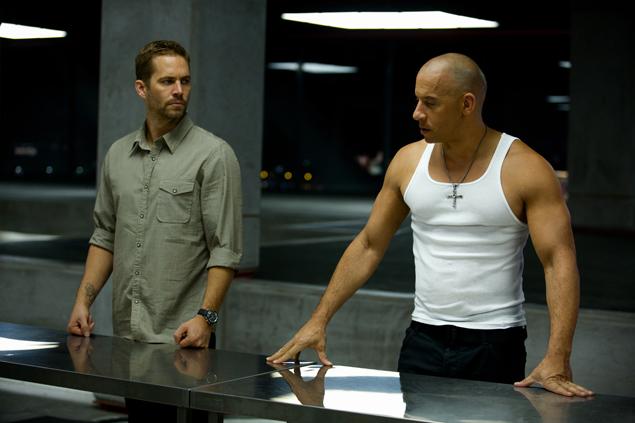 The first four movies in the FAST & FURIOUS series are admittedly guilty pleasures of mine. I’m not even a fan of racing or race cars in the least. I just enjoy them because the characters are fun, the story is entertainingly campy, and the action is heavy. They are fun popcorn flicks that are all just an inch above average. That is until the arrival of 2011’s FAST FIVE which knocked my Yoda-printed socks off! To save you from having to read a paragraph of admiration for that wonderful action-heavy heist film, I will lead you to my full review for FAST FIVE to discover why it was full of so much awesome!

Alright, now that that’s out of the way, we can get down to business with the latest installment for this series titled FAST & FURIOUS 6. Creative I know. Check out the full plot synopsis and trailer below to see what you think.

Since Dom (Diesel) and Brian’s (Walker) Rio heist toppled a kingpin’s empire and left their crew with $100 million, our heroes have scattered across the globe. But their inability to return home and living forever on the lam have left their lives incomplete.

Meanwhile, Hobbs (Johnson) has been tracking an organization of lethally skilled mercenary drivers across 12 countries, whose mastermind (Evans) is aided by a ruthless second-in-command revealed to be the love Dom thought was dead, Letty (Rodriguez). The only way to stop the criminal outfit is to outmatch them at street level, so Hobbs asks Dom to assemble his elite team in London. Payment? Full pardons for all of them so they can return home and make their families whole again.

Building on the worldwide blockbuster success of Fast Five and taking the action, stunts and narrative to even greater heights, “Fast & Furious 6″ sees director Justin Lin back behind the camera for the fourth time. He is supported by longtime producers Neal H. Moritz and Vin Diesel, who welcome producer Clayton Townsend back to the series.

Yes sir it looks like I’m in for some more sweet ass FAST & FURIOUS action! Looks like the franchise is focusing a little bit more on fast cars and racing this time which isn’t necessarily a bad thing because it also appears that the set pieces and action sequences will deliver. That and the fact that Dwayne “The Rock” Johnson’s character is back to kick some more ass! He was a great addition to the ensemble! Honestly, I never thought there would be a day when one of my most anticipated summer blockbuster films was a FAST & FURIOUS sequel. That day has come and I’m ok with it.