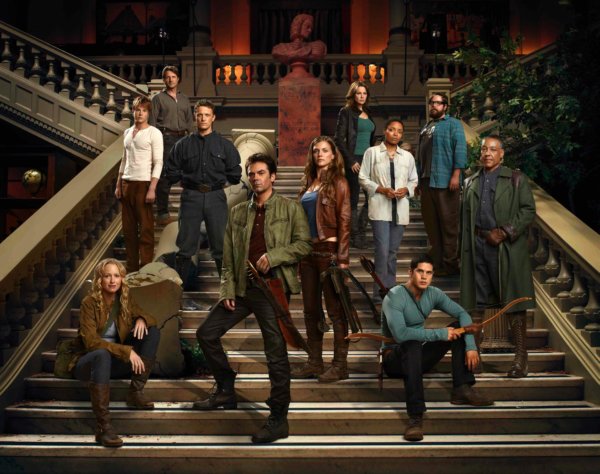 NBC recently announced their upcoming fall lineup that included a cool looking new show called REVOLUTION. There is a lot of creative power backing this show up including JJ Abrams (SUPER 8, STAR TREK) as an executive producer, Eric Kripke (SUPERNATURAL) as creator and executive producer, and even Jon Favreau (IRON MAN, COWBOYS & ALIENS) as the director of the pilot episode! So cool!

Here is the official plot synopsis:

Our entire way of life depends on electricity. So what would happen if it just stopped working? Well, one day, like a switch turned off, the world is suddenly thrust back into the dark ages. Planes fall from the sky, hospitals shut down, and communication is impossible. And without any modern technology, who can tell us why?

Now, 15 years later, life is back to what it once was long before the industrial revolution: families living in quiet cul-de-sacs, and when the sun goes down, the lanterns and candles are lit. Life is slower and sweeter. Or is it?

On the fringes of small farming communities, danger lurks. And a young woman’s life is dramatically changed when a local militia arrives and kills her father, who mysteriously – and unbeknownst to her – had something to do with the blackout. This brutal encounter sets her and two unlikely companions off on a daring coming-of-age journey to find answers about the past in the hopes of reclaiming the future.

I will at least be checking out the pilot episode this fall and I think NBC may just have their next hit. Check out the extended trailer below and get excited!

REVOLUTION will air Mondays this fall on NBC