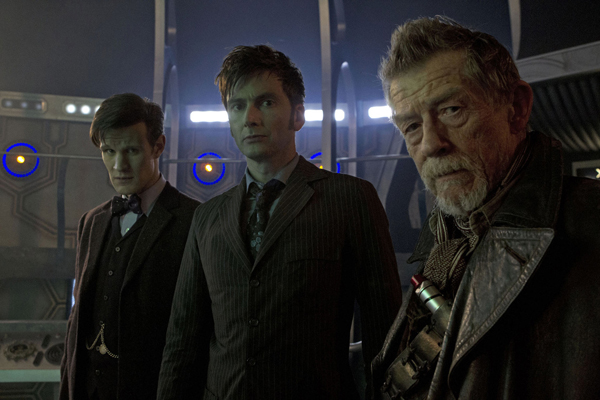 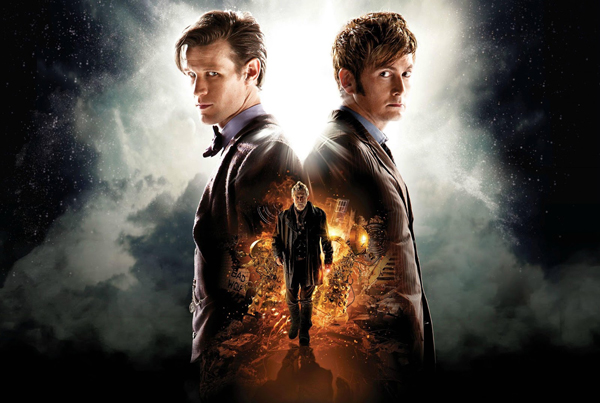 Warning: Spoilers Ahead, do not read if you haven’t watched the special and want to be surprised!!

50 years ago the BBC took a chance on a new science fiction show centered around a time traveling alien known as The Doctor. That gamble is still paying off today as the 50th anniversary special, THE DAY OF THE DOCTOR, was broadcast in 94 countries, breaking the Guinness world record for largest simulcast of a TV drama. The episode centers around three Doctors, the 11th (or is it 12th now? There’s kind of a hiccup in the numbering system after this episode) Doctor, played by Matt Smith (BERT AND DICKIE), who gets brought in by UNIT, Unified Intelligence Taskforce, to deal with a disturbance in their art vault, the 10th Doctor, played by David Tennant (TV’s THE ESCAPE ARTIST), who is gallivanting around with Queen Elizabeth I and dealing with Zygons when a time portal appears, and the unnumbered Doctor (9th in time line but 12th in introduction, hence the numbering issue) played by John Hurt (HARRY POTTER AND THE DEATHLY HALLOWS PART 2), who is preparing to destroy both Gallifrey and the Daleks in The Last Great Time War when a similar time portal opens. The Doctors team up to deal with the Zygons, with a little help from the 11th Doctor’s current companion, Clara, and in doing so give new insight to John Hurt’s Doctor, prompting a radical new approach to ending The Last Great Time War. 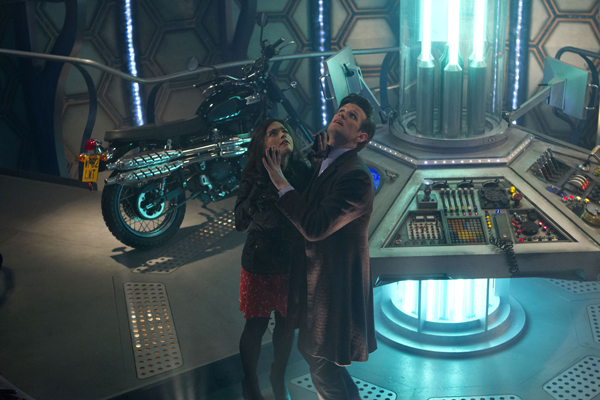 The overall production of the special is at the usual standard of the current series, effects are well done, but clearly on a budget. This has never been a detraction for me as the sometimes silly production quality is part of the fun of Doctor Who; it doesn’t take itself too seriously and most of the fans don’t want it to. Fans who are new to the series since the re-launch should be more than pleased with this episode as writer Steven Moffat throws in plenty of references to earlier episodes, not to mention the fact that it features the two longest serving Doctors since the return. However, I feel that older fans have plenty to be pleased about as well since Tom Baker, who played the 4th Doctor, has an appearance, and because they implemented archival footage to have all the Doctors play a part in the story’s climax. The only issue I could see fans taking umbrage with is the fact that we only get implied resolution to the Zygon problem, but based on the extraordinary happenings that take place afterwards, I doubt many people will even notice or care.

The cast is by far the best part of THE DAY OF THE DOCTOR, if only because it is so much fun to watch the three Doctors play off of each other. Matt Smith and David Tennant have great chemistry together, they seamlessly play off their characters similarities and idiosyncrasies and give the audience an interplay that is heartwarming and humorous. John Hurt is perfect in his role as odd Doctor out for most of the show, but is more than able to jump into a team dynamic when its called for, and his wonderfully expressive features make him a joy to watch. Billie Piper (TV’s SECRET DIARY OF A CALL GIRL) returns as a version of Rose, and does a good job with the role, although its not as involved than I would have liked. Jenna Coleman continues to be delightful as Clara, her enthusiasm radiates from the screen and her timing is impeccable, I sincerely hope that she sticks around as a companion for quite some time. One of the more surprisingly fun performances in the episode came from Joanna Page (TV’s BREATHLESS) who filled the role of Queen Elizabeth I. She brings the revered queen to ludicrous life and infects her with a bubbliness that, while not entirely queenly, is ridiculously amusing.

The DOCTOR WHO 50th anniversary special has something for every fan. It has plenty of references to older episodes, pays homage to the Doctors who have come before, and throws a major twist into the Doctor Who mythology. I was deeply satisfied and I can’t wait to see what they cook up for the Christmas special.