DESTINY Introduces “Sparrow Racing League” and We Played it! Trailer and Impressions! 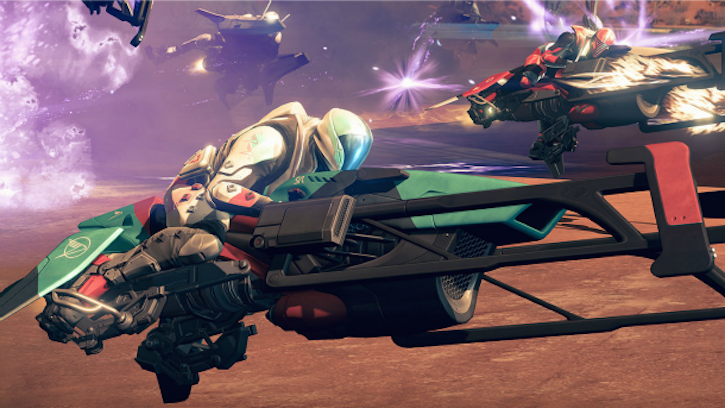 This weekend during Sony’s impressive PLAYSTATION EXPERIENCE 2015 keynote presentation (Impressions HERE), it was revealed that DESTINY fans have something new to look forward to in the form of a 3-week long racing event called “Sparrow Racing League”. Starting on December 8th 2015 fans will have 3 weeks to race, collect new Sparrows, gain new gear, and prove they are champions of the race track as well as the battlefield. If that all sounded corny, it’s because it is and I love it! Racing in DESTINY!? Ummm, yes please.

For those that own THE TAKEN KING expansion, the Sparrow Racing League event will be absolutely FREE to play much like the “Iron Banner” event. So if you are like me and have been taking a break from DESTINY, now looks like a wonderful time to jump back in. Check out the official reveal trailer to see what it all looks like.

Oh, wait. Did I mentioned I got a chance to play Sparrow Racing League at the PLAYSTATION EXPERIENCE 2015…twice. I played twice because winner of a 6-person race received an exclusive Sparrow Racing League t-shirt. And yes, After getting 2nd place my first try, my second go around landed me the coveted 1st place spot! T-shirt unlocked!

Errrg, you probably don’t care about my damn t-shirt as much as how the game actually played right!? Well rest easy my friends, Sparrow Racing League was fun as hell. Both go-rounds I played on the Mars track. There were 3 laps and 6 players racing while enemies fired at you, players smashed against you, and many obstacles (including huge spiraling fan blades) were strategically placed to knock you out of action…and they did…often. Players left and right were blowing up and flying off course. It was pretty exciting. The controls were just as they are now on the Sparrow with no new abilities to speak of. You can accelerate, brake, and shift left or right away from obstacles. It’s all very tight and smooth. When you crash, you know why and get back to it attempting to learn from your mistakes. Overall it was a joy to play and I definitely will recommend it to friends.

The SPARROW RACING LEAGUE begins December 8th for owners of THE TAKEN KING for FREE! It will last 3 weeks. And yes, I’ll be wearing my t-shirt a lot over those 3 weeks because nerd…