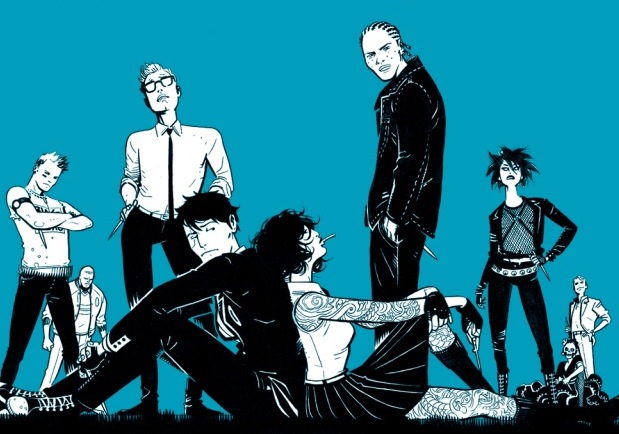 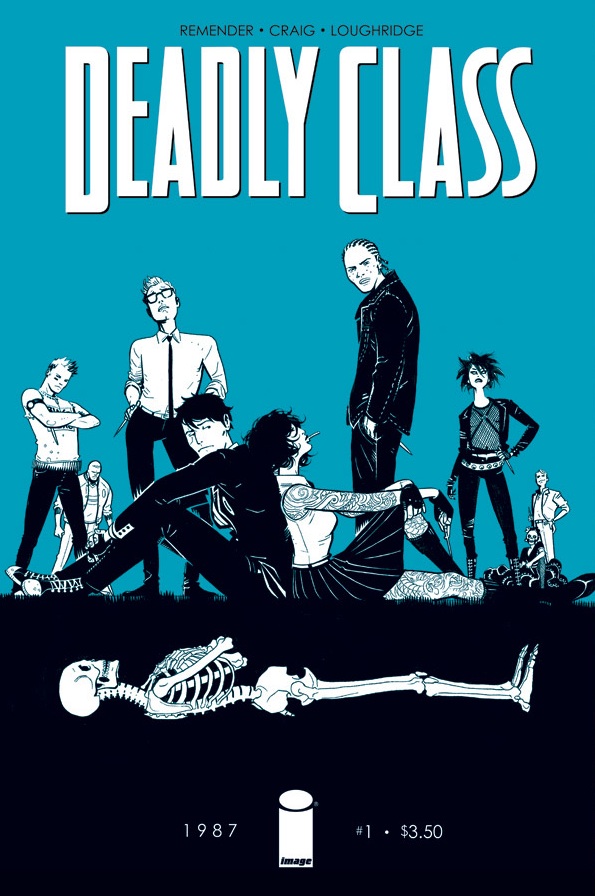 DEADLY CLASS stars a down and out youngster named Marcus who is on the brink of suicide due to a tragic past, living on the streets, and eating shit day in and day out. The story is set in 1987 on the streets of San Francisco. Lucky for me, I live in San Francisco and love the 80’s to excess! This premiere issue introduces us to Marcus and eventually sets up the stage for what’s to come. We see Marcus living the low and dirty life only to have it interrupted by a group of young assassin’s and their short and bald mentor who offer him a fresh start. Think THE MATRIX meets X-MEN. Our main here is very Neo-like and his life is interrupted by a very Trinity-like character who introduces Marcus to a X Mansion-like Mansion that is run by a small bald mentor (why did he have to be bald!) who is very Professor X-like. So yeah it’s damn obvious that writer Rick Remender (BLACK SCIENCE) likes the X-MEN and has definitely seen THE MATRIX more than once or twice. So I suppose the biggest downfall for DEADLY CLASS is its lack of originality. Sure it looks cool and feels neat, but dammit I’m a pretty big nerd myself and this #1 intro issue has a lot of “been there, done that” vibes running a muck!

To compliment the overall fun, but unfortunately un-originalish story concept, we have the art of Wes Craig who I’m not too familiar with yet. The cover to issue #1 is stunning and was the reason I nabbed this beauty off the comic shelf in the first place. He has very light yet bold color choices that really make the book pop and shine. Each page or two seems to have its own unique color palette. This sometimes feels awkward and unsure of itself, but it looks damn cool so that’s usually good enough for me. There are a lot of panels within this issue that scream “cooooool”! I’d say my biggest gripe here is with the location and background work. For a story set in my home city, I never really felt like I was in San Francisco…like ever. Sure there are some nods here and there to landmarks or districts, but most of the backgrounds are just a stark color with no real reference for where I am. We could be anywhere! Normally I don’t mind this style, but this city is so ripe with interesting locations I was quite excited to see the artist’s take on it all especially in the 1980’s! But alas, it was a bit of a missed opportunity. However, the character designs and action sequences are a marvel to behold. They are intense, fun, and there is high attention to overall detail in the action segments that pleased my eye.

So is DEADLY CLASS #1 worth a look? Sure, give it a shot. While I do nitpick quite a bit in the above paragraphs (which you likely didn’t read did you!?), there is a lot to like about this book. The story is pretty damn familiar (THE MATRIX marries X-MEN anyone!?), but has a fun enough spin to keep me interested for now. The art is all over the place offering interesting color choices, awesome character designs, and some fun action even though it lacks some much needed location and background variety. I recommend not comparing almost every aspect of this book to something you already have seen or read (like I did!) to get the most enjoyment. Alas, I am still interested in seeing where Remender and Craig take us in DEADLY CLASS and I hope it is to a place unexpected and new!