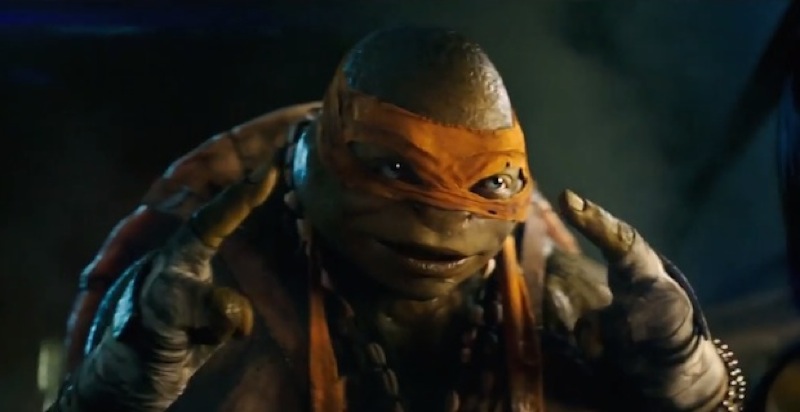 Some fans dreaded the rumors of an alien origin (which, thankfully, have been debunked).  They cringed at the thought of Megan Fox (THIS IS 40) as everyone’s favorite reporter April O’Neil.  They cried “Heresy!” when they found out that longstanding TMNT bad guy Shredder was going to be played by longstanding white guy William Fichtner (ELYSIUM) instead of a Japanese dude.  Well, love it or leave it, the teaser trailer for the Michael Bay-produced TEENAGE MUTANT NINJA TURTLES reboot has finally arrived!  Check it out for yourself:

Being a longtime Turtle fan, you’d probably expect me to be up in arms over this recent reinterpretation of Kevin Eastman & Peter Laird’s beloved creation.  Well, honestly, this trailer has me further intrigued about the film if not genuinely excited about it.  The action and spectacle is beyond anything we’ve seen yet in a Turtle film (I wish I had a shell that I could use to sled down a mountain).  The tone looks to be darker than previous incarnations, but not devoid of humor (as that final scene with Michelangelo proves).  I’m perfectly fine with the origin story being tweaked to make the April/Turtles connection more of a family affair.  April was an integral part of their mutation in the IDW comic book relaunch and no one’s really badmouthed that run.  Granted, we haven’t heard her speak one line of dialogue yet, but Megan Fox at least looks game for the material.  And I’ll be honest, I’m digging the 6 foot-something tall quasi-realistic Turtles.  Let’s face it: real-life chemical mutation would probably not be so kind as to make our heroes look as cute and cuddly as they did in previous comics, cartoons and movies.  I actually appreciate the grungy and more grotesque look.  And so far, the motion-capture work looks pretty seamless.

All in all, I’m pretty interested and excited to see what the film has to offer.  I’m not so heavily married to one particular version of the Turtles that I can’t appreciate future additions to the mythology.  As much as this was a part of my childhood, it’s now part of a new generation’s childhood and I only hope that it will be more than enough to entertain both of us.

Just keep Shia LaDouche away from this franchise, Michael Bay…

What say you, fellow Half-Shell Heroes?  Excited/terrified about this new TMNT?  Sound off below!