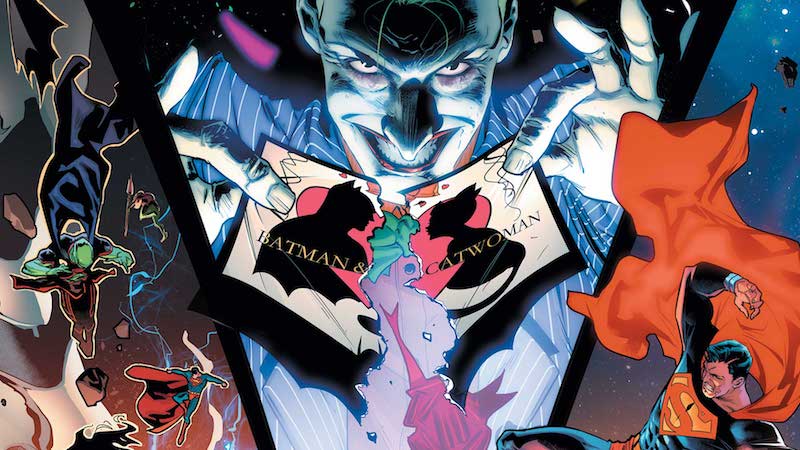 If it seems like big boys Marvel and DC are always putting out #0 and #1 issues…well…it’s because they do. Think about it, would you rather by a shiny new #1 issue or a crummy old #483? It’s just simple nerd phsycology folks.

In an effort to build some hype for their summer event books, DC is giving fans 3 short stories in one jam-packed issue prepping our brains for BATMAN #50 (Out 7/4!), THE MAN OF STEEL #1 (out now), and JUSTICE LEAGUE: NO JUSTICE #1 (yup, also out now). If you’re not convinced yet, you can nab this at your local comic shop for a measly 25 cents.

Batman in “Your Big Day” is an extremely effective Joker story by writer Tom King. King is the…err…king of writing Batman comics. Ever since he took over the reins, we’ve be treated to some amazing stories. The basic premise of this short is that Joker wants an invitation to Bats upcoming wedding, so in traditional Joker form, he randomly selects a house in the burbs awaiting his invitation. This issue is total chaos and truly scary. I actually haven’t been legitimately scared of Joker for a long time. This book did it. A lot of the credit goes to artist Clay Mann. Those eyes!

The middle child in this book is a short n’ sweet Superman tale that plays the nostalgia card quite heavily. It’s a nice teaser of what’s to come with Brian Michael Bendis’ MAN OF STEEL RUN. And those red undies are back!

Finally, we get a cool, and admittedly somewhat overwhelming look at some new DC superhero teams we can look forward to in the 4-part mini-series NO MORE JUSTICE. This story is just a handshake, and thanks to some stellar and fun art by Jorge Jimenez, I’ll be sure to pick up that series in full. Chances are high your favorite DC hero and/or villain will show up here!

DC NATION #0 comes highly recommended to those looking to get into some new DC books. Personally, I’m going to follow all these stories into the summer. It’s an exciting time to be a DC fan!