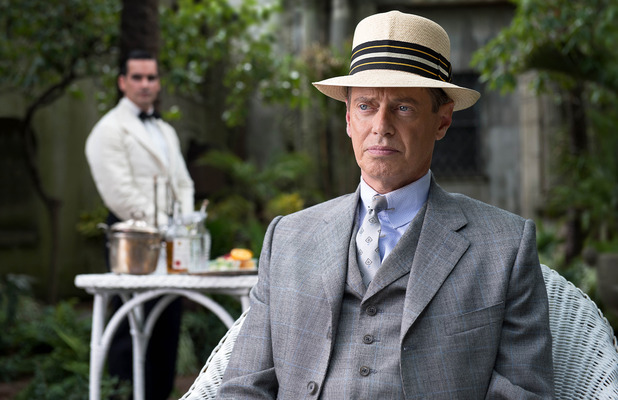 HBO’s prohibition hit, BOARDWALK EMPIRE, has returned for its fifth and final season, and fans of the show are certainly in for a surprise. The end of the fourth season saw major happenings in the power game in Atlantic City, however, season five opens in Cuba nearly seven years later, with no explanation or recap of the intervening years. Nucky is in Cuba in an effort to secure a liquor distribution deal as the end of prohibition is looming, and he’s clearly not the only one looking to the future as he runs into Meyer Lansky, a major player in the New York mob scene. Other happenings involve Chalky White, who has seen better days as he is part of a chain gang, Luciano making some powerful moves in New York, and Margaret Thompson dealing with the effects the stock market crash has had on her employer.

I’m continually impressed by the production values of BOARDWALK EMPIRE. Everything from the sets and locations to the costumes and props look time period accurate and it does a wonderful job of raising the tone of the show. It was especially cool to see how they did the Cuba settings in this episode, as it is portrayed in its glamour days before communism took over, and they did a wonderful job of making it look beautiful and fun, the perfect refuge for wealthy vacationers.

I must admit that I was rather disappointed with this episode’s story. While it did do a decent job of setting up the premise for the season, the missing years with no explanation made it hard to care, particularly as some major players from past seasons are nowhere to be seen and, given the new point in history, some of the historically based ones are now dead. While I can understand a move forward as wanting to end the series with the end of prohibition, I think that it loses so much from the shift in continuity that its hard to care. It also spent a fairly long time on flashbacks to Nucky’s childhood, and while it was interesting, I didn’t see much parallel with the rest of the episode, so I don’t really understand why it was there. As a fan, I don’t really care to see how any of the characters transition into a post prohibition world, I want to see the mid to late twenties when people like Nucky and Capone were masters of their domain and on top of the world. I may be alone here, but I really loved the tone of the show in the first and second seasons, and I’ve been waiting for more of a glory days tone to return, and now that that seems extremely unlikely, I find it hard to dig this new direction.

On the plus side, the performances in BOARDWALK EMPIRE remain top notch. Steve Buscemi (MONSTERS UNIVERSITY) once again reprises his role as Nucky Thompson and he is just as great as ever. Buscemi has long since mastered the character of Nucky, and it’s fun to see him bring the brooding, business-minded criminal back to the screen. I was very impressed with Michael K. Williams (12 YEARS A SLAVE) in this episode. Williams returns to the role of Chalky White, but this time the man is beyond down and out, and he plays the character with an internal rage and defiance that made his scenes captivating. Vincent Piazza (JERSEY BOYS) has always done a nice job with the role of Lucky Luciano, and this episode is no exception. Piazza brings Luciano’s cunning and ruthlessness to life with a subtle hand that makes him believable as the iconic mobster. I hope this opening is an indication that we are going to see more of him this season. Lastly, Kelly Macdonald (BRAVE) steps into the role of Margaret Thompson once again, and while she continues to do a nice job with the role, there wasn’t enough development in the character’s story for there to be any particularly impressive moments.

I was really hoping for an impressive opening to the final season of BOARDWALK EMPIRE, unfortunately the timeline jumped way forward and left me confused and somewhat disinterested. While the acting and production values remained strong, the story will have to greatly improve if this season hopes to come close to the quality of the previous ones. Overall, this was a rather lackluster opening and it makes me seriously wonder if the creative team has simply given up trying since the show’s future has been determined.