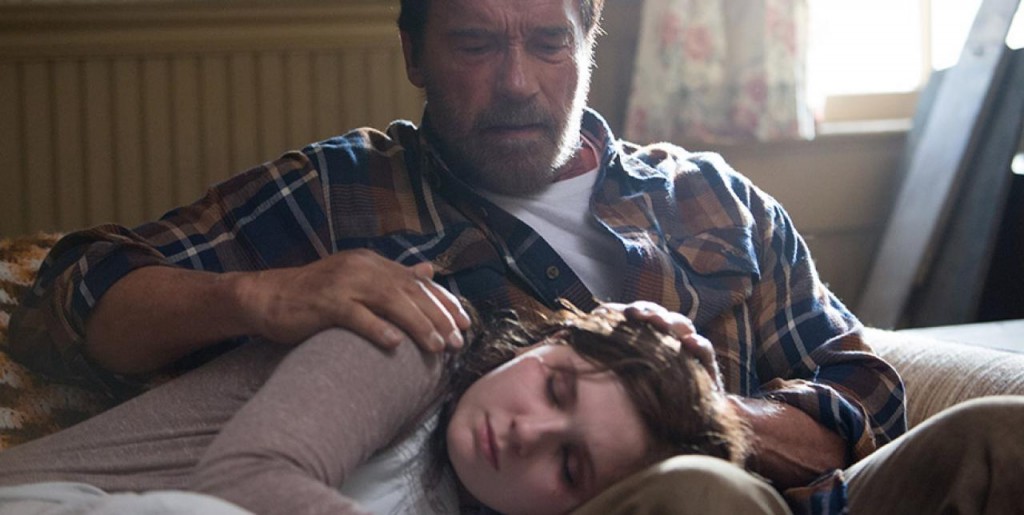 I was going to start this article off by saying that ‘it’s a rare threat when a small independent film sneaks up on you and takes you completely by surprise.’  I thought about that statement and realized that’s not really the way things are anymore.  Some of the most inventive and imaginative films that have come out in the past few years have been passion projects by lesser known or first time directors and creators. As this trend continues, It’s becoming more common to see ‘bigger named’ actors searching for projects outside of the main movie studio lots, in hopes of exploring their range and demonstrating a different side to their commonly seen cinematic persona.  All throughout the MAGGIE trailer, I couldn’t help but repeatedly say to myself ‘I can’t believe that’s Arnold Schwarzenegger.’

The premise of MAGGIE feels fairly familiar.  There appears to be a ‘zombie-like virus’ ravaging the United States and Arnold’s daughter is infected. This puts him into the complicated situation of not knowing how to best protect his daughter and honoring a promise to his wife to always do so. As with most zombie movies, when someone is infected, there’s only one thing left to do. It doesn’t matter if they are a loved one or a complete stranger, there will be a point when they cease to be the person they were and become something hostile and dangerous.  It’s interesting to see this emotional struggle being played out in such a way.  It’s especially great to see that it’s Arnold making those tough decisions.

I have to say, I am huge fan of Old Man Schwarzenegger.  Throughout the 80s (and maybe most of his career) Arnold has been solely defined as buffed up action hero.  CONAN, PREDATOR, TERMINATOR, it was his physical appearance and his catch phrases that carried him along. Yeah, he has charm, but, he can also smirk while unloading 5,000 rounds per minute from a six barreled M134 Minigun.  As the wheels of time turn on the Olympian, I’m really enjoying watching Arnold’s film choices being more than just ‘mindless action.’  MAGGIE feels like a really bold step for Arnie and I’m anxious to see it. Even though it feels like an origin story to the Governor.

MAGGIE opens in theaters May 8th 2015 in Limited theaters.