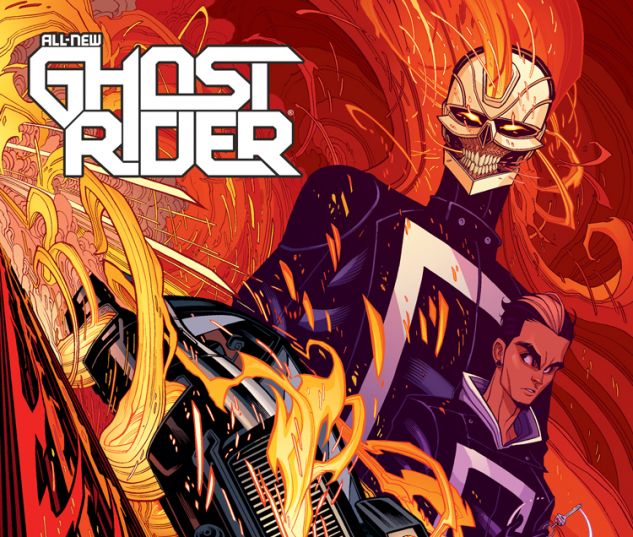 Maybe yer like me. An old man. If so, the words ‘All-New’ in front of anything will scare you more than Ebenezer Laughton with a fleshlight under his chin (He’d be Marvel’s Scarecrow). However, you’d be forgetting that about every 20 years or so…America is just ready. Tired of justice, it’s ready for vengeance. It’s ready to be penitent. It’s ready for the Ghost Rider. Setting the streets on fire, and speaking the truth. “America, America is killing it’s youth.” It seems as if that time is again at hand.

Marvels ALL-NEW GHOST RIDER follows (you guessed it) an all-new dude who gets possessed by the Spirit of Vengeance. This time it is a young cat by the name of Robbie Hayes. He’s living in a totally balls part of East L.A. (Think of the Cheech Marin song and movie vehicle). Fighting off gang members, and single-handedly taking care of his wheelchair-bound, comic book reading little brother Gabe. Following the American dream of a building a better life for his brother and himself, Robbie decides to play to his strengths…cars. Fixing them, and more importantly, racing them. Unfortunately for Robbie, there seems to be a metric shit-ton of pills harbored in the back of the car he’s fixed up/stolen. Oops! Needless to say, things take a sour turn and another Ghost Rider is born.

On the outset, it may seem like this all-new Ghost Rider may seem like a late to the pier cash-grab on the undeniable success of the FAST & FURIOUS movies. Hell, it might be. If so, Marvel should still get props for assembling the perfect dream team for this project. The writer, Felipe Smith, got his start doing the Manga MBQ (It’s also about a young cat growing up in East LA.). Which makes sense. The pace of the book is wicked fast and does not seem to be pandering to the location. I’m sure Mr. Smith is writing about an area that he knows personally. It reads quickly and effortlessly. You will feel like you’ve put it down just as soon as you picked it up. For that reason, it’s still too soon to comment any further on the writing. But, I did notice some pretty clever repeating motifs and foreshadowing sprinkled in there. On revisit, you can see skulls are all around Robbie Reyes’ head. As if the invisible hands of fate where pushing Robbie to the inevitable conclusion he was to inherit. Pre-selected by some unknown dark power (Or I guess it’s the Spirit of Vengeance. So that’s a known dark power). I am not sure how much of that is the writing or the art of Tradd Moore. I have a feeling it’s a little of both.

That stated, one can not sing the praises of Tradd Moore enough. It makes me hyper, devil-loving insane every time I look at his pictures in this book. Like, remember that anime that was on LIQUID TELEVISION. The one that was just a clip of a full length movie. You know the one, where that future race car dude is racing space ghosts (or something). Except he’s going sooooo fast that both his car and reality seem to dissolve in broken parts and streamers of blood. The one where when you saw it you knew you were immediately different, because that was the sweetest thing you had seen in your life up to that point. For me, it was the point when I realized that awesome could indeed be quantified. Tradd Moore’s artwork seems to have the same effect in much the same way. It’s rare that an artist style fits a book so perfectly. It’s like Frank Quietly on FLEX MENTALLO. I could not imagine the book working in any other hands. For that reason, I am keeping my fingers crossed that he’s on for longer that the first four issues. However, if we only got him for four….lemme tall ya. What a fantastic four it will be.

Have you ever heard The Gories cover Suicides Ghost Rider? Well, you should. And you should do it while you read Marvels All-New Ghost Rider. My two word review for both would simply be…Nailed it!